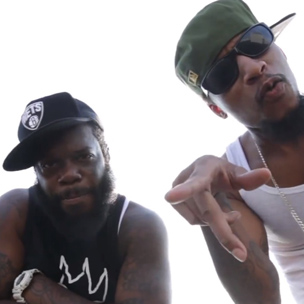 One of the key things that helped propel Smif-N-Wessun’s debut album, Dah Shinin’, which recently celebrated its twentieth anniversary, to commercial success was the duo’s affiliation with The Notorious B.I.G, Puff Daddy and Mary J Blige.

In an exclusive interview with HipHopDX, Steele of Smif-N-Wessun details how the pair’s friendship with Biggie Smalls and a request from Puff Daddy to collaborate with R&B songstress Mary J. Blige on her single “I Love You (Remix)” helped increase their audience and helped the success of the Dah Shinin’.

“It was pure respect, man, from us seeing each other in the New York club circuit,” Steele says. “But with Puff we have no experience with him whatsoever. So for me personally, I was really just a fan of what he was doing. But on the real, what really helped us linked with him was kicking it with the homie Biggie and Junior M.A.F.I.A.”

Steele also says that Puff Daddy convinced Smif-N-Wessun to appear on the remix of “I Love You,” which was included on her chart-topping sophomore album, My Life, and was released just prior to Dah Shinin’.

“We had a show one night, and we was out there all kicking it,” Steele says. “And we had just came from a video shoot so we had all our camouflage garbs up in there. The place that we were at was called the Intrepid, which was a military boat. So how perfect was that, being that we were dressed in all military garbs? It was like we were paying tribute to the soldiers (laughs). So with that on us, people were just staring at us. They were watching us. And Mary had a show that same night there. Mary was clearly hot at the time, and she was steady on the rise. And we were all artists on the come-up. The remix dropped in 1994. ‘Bucktown’ and ‘Lets Get it On’ was out. Then we had ‘Sound Bwoy Burreill’ and was running around town making some noise.

“So what was happening was that we were freshman, and these guys kinda wanted to open the door for us by putting that together,” Steele continues. “What was so dope was Sean Combs, man, he’s a genius. He was like ‘Yo, I want y’all to do that back-and-forth thing that y’all do.’ He told us to get comfortable and left us in the booth. There was no stress from him to do our part. It wasn’t like, ‘Do it again. That’s garbage,’ or any horror stories like that. He was really respectful to us for what we brought to the table.”

Dah Shinin’ is one of the chapters in author Brian Coleman’s book Check The Technique Part 2: Liner Notes For Hip Hop Junkies, which chronicles the making of 25 classic rap albums via interviews by the albums’ artists, producers and record executives.