Coolio was filmed shooting a music video for a song reportedly titled oeTake It To The Hub at a house in Sherman Oaks, California. Pornographic models were provided to the shoot by Pornhub.com, and in exchange, Coolio will release all of his new material on the website, according to TMZ.

The video posted by TMZ shows Coolio and the models dancing and surrounding a car while singing oeTake It To The Hub.

A man not shown onscreen directs the girls. oeSmile while you’re doing this, the man says offscreen. “Look like you’re having a good time.”

Another image from the shoot shows what appears to be a person twerking in a dinosaur costume, per TMZ. It is below.

Coolio, who in recent years has been in the news for his legal troubles, has not released an album since 2009(TM)s From The Bottom 2 The Top. His debut album, 1994(TM)s It Takes A Thief, is his highest peaking album, which debuted at #8 on the Billboard Hot 200.

His follow up, 1995(TM)s Gangsta(TM)s Paradise, featured the #1 single of the same name, which also appeared on the soundtrack for the 1995 film Dangerous Minds.

Coolio famously took issue withWeird Al Yankovic‘s1996 oeAmish Paradise, a parody of his oeGangsta(TM)s Paradise song, but has since lightened up about the parody. 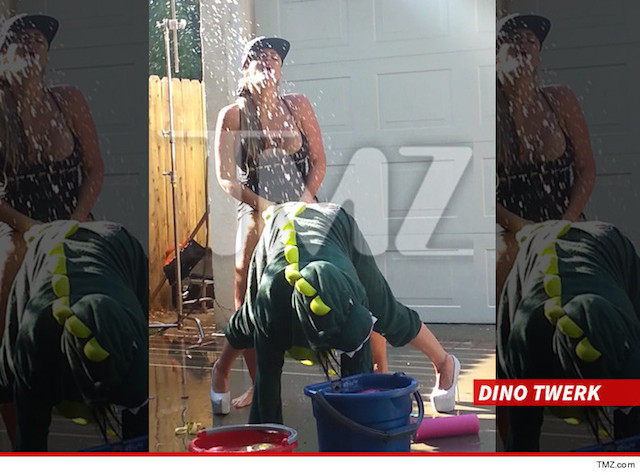