Yesterday (July 20), 50 Cent posted an image of several rats in a circle. The post’s caption references SBOE (Slow Bucks Over Everything).

“Unity SBOE, nice to see you all together LMAO,” 50 Cent says in the caption.

This follows several months of back-and-forth between 50 Cent and Slowbucks.

The ongoing saga featured a chain snatching that took place during Hot 97’s Summer Jam. 50, who was performing during the chain snatching, says he was unaware that it happened. Slowbucks then said he was launching an investigation regarding 50 Cent’s involvement. Soon after, Mikey Fingers, a 50 affiliate, was arrested for the robbery.

During a 2013 interview with Hartford radio station 93.7, S.B.O.E. was described as a collective that features Slowbucks, Sid Bounce, Von and Juelz Santana. 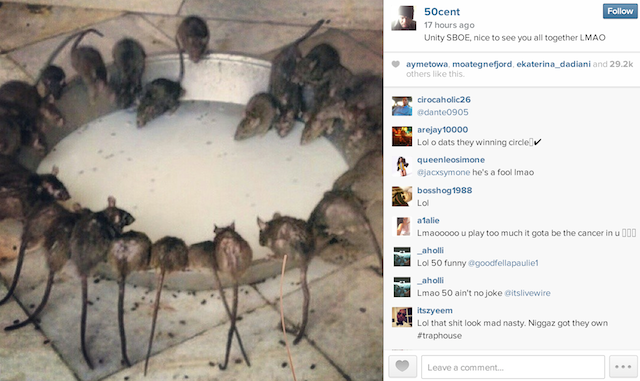