Derick Bowers, the man behind the petition requesting Jay Z to end his partnership with Barneys New York, wants Jay Z to cut ties with Barneys because the retailer’s actions show that “they have no connection with the young, black Hip Hop community.”

In an interview with allhiphop.com, Bowers says, “I’m not personally attacking Jay Z. This attack is really at Barneys. What I’m asking from him is to withdraw that partnership to let them know we have that power, and you can’t take that from us.”

“What’s more surprising is the fact that because of these actions Barneys clearly shows that they have no connection with the young, black Hip Hop community, and if that’s the case then why are they reaching for the brand power of Jay Z who is the face of that,” says Bowers to allhiphop.com.

In September, Jay Z revealed a partnership with Barneys titled “A New York Holiday,” which will consist of limited edition pieces by high-end fashion brands and interactive window displays for the holiday season.

“I want them to have a real dialogue. I want the CEO of Barneys to come to Brooklyn and have a Town Hall meeting with the people who want to be where he’s at. We’re not all that different. Just different skin tones, different salary brackets, but at the end of the day we breath, we want more for our children, we just want to be happy,” says Bowser to allhiphop.com. 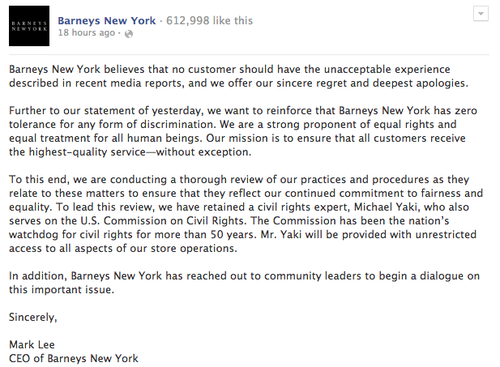 According to Racked NY, Lee has also agreed to meet with reps of Reverend Al Sharpton’s National Action Network, a civil rights organization in New York.