Jay Z Asked To Cut Ties With Barneys In Petition

A petition has been launched asking Jay Z to end his business relationship with Barneys New York.

Jay Z and Barneys are slated to release a holiday collection this year, “A New York Holiday.” The partnership is scheduled to feature limited edition products to the retailer and interactive window displays for the holiday season.

The petition was launched following reported incidents in which Barneys allegedly discriminated against two African American customers, according to complex.com.

On Tuesday (October 22), the New York Daily News reported about Barneys customer Trayvon Christian, who says he was detained by New York Police Department officials on suspicion that he purchased a $349 Ferragamo belt from Madison Avenue’s Barneys store location with a fraudulent credit card. Christian was reportedly detained until NYPD officials determined that his credit card was authentic.

On Wednesday (October 23), the New York Daily News reported that Barneys customer Kayla Phillips was stopped by NYPD officials after purchasing a $2,500 Celine purse because they believed she was guilty of committing credit card fraud.

Phillips and Christian are planning to sue Barneys.

Now, a petition on change.org is requesting that Jay Z end his partnership with Barneys New York. The petition was launched by Derick Bowers, a fan of Jay Z and a Brooklyn, New York resident, who says he feels Jay Z should be “appalled by Barneys’ actions.”

“If he does this, he will send a clear message to all corporations that are likeminded, that this behavior cannot be tolerated any longer,” Bowers says in the petition.

Jay Z spoke about his partnership with Barneys in a press release when it was announced in September.

“With this project, Barneys New York and I were able to take the slickness, energy, and innovation of New York City and translate that into quality, timeless pieces,” Jay Z said in a statement. “Everything that encompasses ‘A New York Holiday’—the items chosen, the amazing designers that participated, the windows, the design of the BNY SCC Gallery—represents a perfect example of a unique and groundbreaking collaboration that I hope demonstrates how inspiring New York has been to me.”

Bowers’ shirt is on sale for $25 and all proceeds are slated to go to the Boys and Girls Club of America, according to complex.com. The t-shirt design can be viewed below. 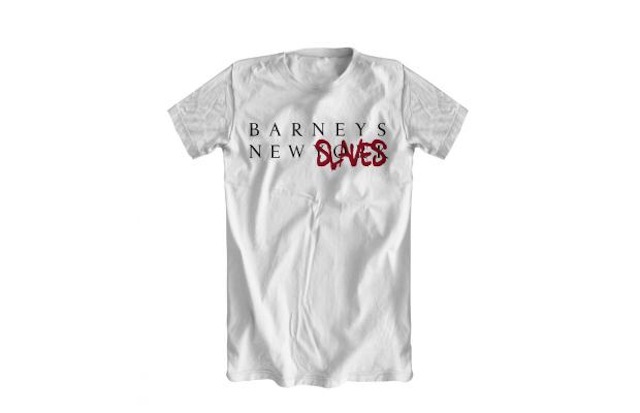