Today, Pro Era’s Joey Bada$$ announced his next project. The Brooklyn, New York emcee is working on an EP called Summer Knights. The title takes its name from the Chuck Strangers-produced song from Joey’s 2012 mixtape, 1999. The tape would later receive Mixtape Of The Year honors from HipHopDX.

The project will release on June 12. Previously, Bada$$ referred to the project as a “mixtape,” which is presumably a free effort.

Summer Knights EP was initially thought to be a Pro Era group project from Joey’s May 10 tweet, though in today’s tweet, Bada$$ referred to it as his own.

ok so the word is…. a brand new PRO ERA mixtape next month… “Summer Knights EP”

UPDATE: Joey Bada$$ has now added that Summer Knights will be a long-format project, not an EP. The Brooklyn, New York emcee confirmed today on Twitter:

summr knights will no longer be an EP…. full-length

UPDATE #2: Joey Bada$$ has released the cover art to Summer Knights, which is billed under his own name: 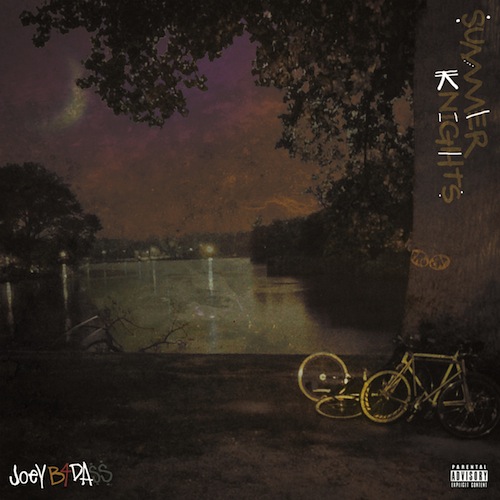 UPDATE #3: Joey Bada$$ now says that the June 12 release date has been “pushed back.” This morning (June 10), Joey announced the delay with Summer Knights on Twitter:

UPDATE #4: Following the announcement on June 10, Joey Bada$$ has provided fans with a new release date for his Summer Knights mixtape. According to a tweet today and confirmation from his publicist, the Pro Era front-man will release the project on July 1:

Summer Knights pushed back to July 1st….. and King Capital will no longer be released as free mixtape on 7/7…

UPDATE #5: Joey Bada$$ has revealed the tracklist for his upcoming Summer Knights mixtape. The July 1 release from the Brooklyn rapper features production from the Alchemist, Statik Selektah, Doom and Chuck Strangers, as well as guest appearances from members of the Pro Era collective, such as CJ Fly and Kirk Knight. The mixtape will also feature the recently released single “95 Til Infinity.”

The Summer Knights tracklist is as follows:

UPDATE #6: Joey Bada$$ released the stream and the download link for Summer Knights today (July 1). The mixtape can be downloaded at livemixtapes.com and can be streamed below.