Earlier this week, New York City veteran emcee Donny Goines announced plans to take the Guinness Record for the world’s longest freestyle. However, the collaborator of acts like Bun B, X.V. and Pill gained the most attention for releasing “F*ck Lil Wayne (I Flat Out Don’t Like You)” yesterday (August 23).

The record was a clear response to Lil Wayne’s MTV interview earlier this week, where the Young Money/Cash Money superstar was quoted as saying, “Flat out, I don’t like New York.”

HipHopDX contacted Donny to understand his reason for the record, as well as to get his reaction to its impact.

“I am a man of respect. I believe everyone should treat each other with it and for Lil Wayne to make a comment such as [‘Flat out, I don’t like New York’] was really disrespectful. It goes further beyond that though, his actions have been on my radar for quite sometime now and his attitude towards the city baffles me because we embrace him. First, he pulls the plug on a Summer Jam performance, disappointing all of his and Young Money fans because of an opinion – keep that word in your mind for a second. Peter Rosenberg made [a comment] about a questionable Nicki Minaj record. Then it becomes a ‘YM f#ck Rosenberg’ thing, and as far as I’m concerned he is one of the ambassadors of my city and the Hip Hop culture so I wasn’t feeling that at all. I’m riding with Rosenberg and like any good friend, am going to take offense to that and defend him if needed. Now, Lil Wayne states his opinion about New York so guess what? I stated my opinion about him.”

Donny continued, reacting to skepticism from some, as he publicly spoke ill of the superstar rapper. “Most people question ‘Who I am? How can I diss someone of his stature?’ so on and so forth. As far as I’m concerned though, he is just another MC in my eyes and our culture was born upon battling. That was just a warning shot though. I’m done with it. Most people in the music business want record deals, fame, money, etc. so they won’t respond out of fear of repercussion. As for myself, I don’t want a record deal. In fact, I’ve turned down several already. I enjoy being independent. I hate fame, but I get enough attention as it is and as far as my lifestyle or people assuming I’m just an ‘underground’ rapper looking for attention let me say this: I own my own company, have a well-respected resume, have worked with legends and I’m writing this from my High Rise apartment luxury building with floor to ceiling windows overlooking Times Square. I’m good, trust me.” 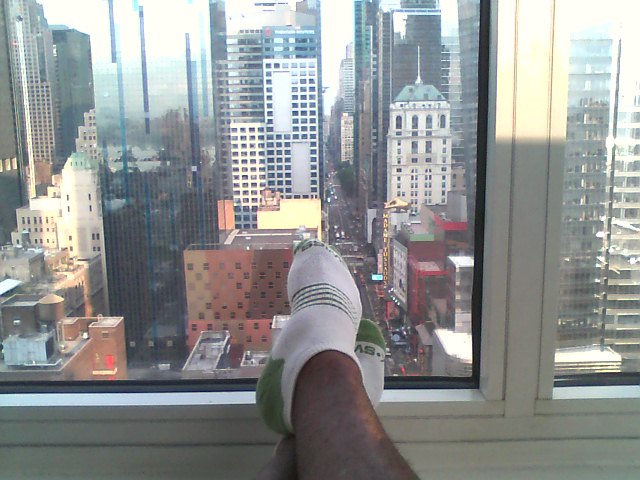 Goines included the above picture and closed his statement in saying, :Moral of the story, this is Hip Hop. If you can’t take it, don’t dish it out.”

Lil Wayne has not publicly responded to Goines’ record.