Tyler, the Creator Explains Getting Choked By Gucci Mane's Bodyguard And His "Dykes" Line Aimed At MC Lyte

In early March, streetwear brand The Hundreds threw an invite only party to celebrate the release of their collaborative watch with Casio/G-Shock. A performance by the event’s headliner, Gucci Mane, was highlighted by Odd Future’s Tyler, the Creator being choked and thrown into the crowd by someone from Gucci’s security detail. In a recent interview with DJ Drama, Tyler—a frequent stage diver—didn’t seem phased by the incident.

“The security for the venue was already pissed at me—they choked me out until they realized it was me,” Tyler explained. “They were like, ‘I’m sorry.’ Then I went back in that motherfucker. And then Gucci and his people told me to just come onstage. But they didn’t let his security guard nigga know. So when I jumped onstage, they thought I was just some random nigga going on stage. So the nigga got me by the neck and picked me up and threw me. I landed on my feet…it wasn’t as crazy as it seemed.” 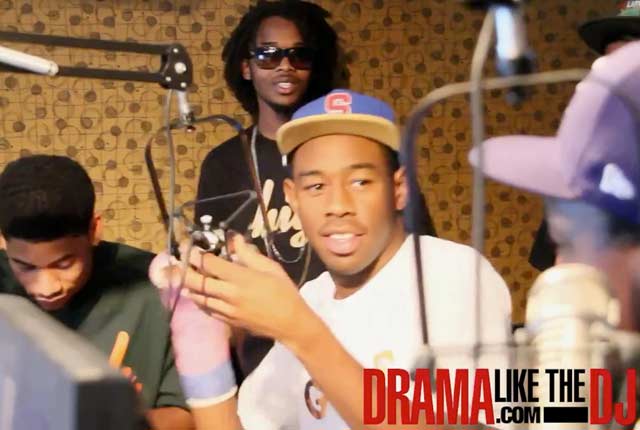 Other topics covered by Drama and Odd Future included their new album, their show “Loiter Squad” and a possible collabortion with Pop star, Justin Bieber. Another subject was the track “Rella,” which featured Tyler rhyming, “Let’s get it poppin’ like MC Lyte around some dykes.” Lyte gave an exclusive response to HipHopDX in March. And upon hearing Lyte’s response, Tyler gave his reasoning behind the lyric.

“I don’t know if she’s gay or not,” Tyler added. “It was a joke. But if she took offense, so be it…I’m not gonna apologize, but I didn’t mean for her feelings to get hurt. Usually people in that position, you’d think they would laugh it off and go on with their day. But I guess she caught feelings. I didn’t mean to do that, but whatever.”