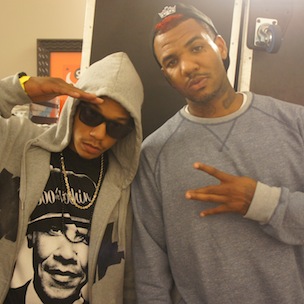 While The Roots are universally thought to be the most impressive band in the history of Hip Hop, the Illadelph crew may be facing their stiffest competition yet for that crown of the live stage from Los Angeles natives 1500 Or Nothin.

An assemblage of musicians, producers and writers, 1500 Or Nothin have spent the last five years rocking stages worldwide while helping to crank out hits for an assortment of rappers and singers. And now the band behind some of Just Blaze’s most impressive productions is finally getting a searing hot spotlight shined on it thanks in part to group member Lamar “Mars” Edwards. Recently, the 26-year-old has received an onslaught of media attention due to his work as the executive producer of Game’s The R.E.D. Album .

On Wednesday (August 24th), Mars – who is also one-third of T.I.’s Smash Factory production team – took some time out from stockpiling tracks for the King’s upcoming comeback (as well as a forthcoming 1500 Or Nothin compilation) to speak to HipHopDX about his recent proclamation regarding Game’s next album, why his band is still an enigma to some, and why he can’t talk about The Fresh Prince.

HipHopDX: I wanna start off by admitting that I needed a late pass on 1500 Or Nothin. I thought it was a production duo, I didn’t know y’all [are] a full band with a drummer so ill he’s gonna make ?uestlove lose sleep. [Laughs]

Mars: [Laughs] A lot of people don’t really know that we’re musicians, or some people see Lupe [Fiasco]’s concerts or have seen T.I.’s concerts and have seen David Banner and some of the people we’ve played with and just hadn’t connected the dots. [But], it’s kinda all coming together slowly but surely now.

DX: Do the artists bug out at first when y’all come through on some Stetsasonic shit?

Mars: Yeah, it definitely takes ‘em to another level. Lupe’s show, he had a nice show and he had the songs that people were familiar with, but we took that show and totally elevated it to times 1500. And people were – it was like a half, 50/50 thing where people were coming to see the show as well as people coming to see the band ‘cause they know people is jumping all over the place and throwing keyboards and doing crazy stuff. [Laughs]

DX: Yeah, I saw some of that footage, it was crazy. [Laughs] You mentioned Lupe a couple times, but y’all’ve played live with Nas, Snoop … Who was the best to play for?

Mars: Who was the best to play for? [Laughs] That’s funny. Uh … I have to say … I’d say I had the most fun with Lupe, because we spent a significant amount of time touring with him. But, I’d also say it was a great learning experience being T.I.’s musical director. So, it was between those two experiences I think. Of course, not discrediting when we performed with Game or when we performed with David Banner or Mary Mary or anybody else, but it’s just certain artists you connect with and certain music that’s just fun playing, especially when you’re a fan of the music as well.

DX: Moving from y’alls live show skills back to your studio work … Please tell me that after Game’s “Why You Hate The Game,” Ghostface Killah’s “The Champ” and Jay-Z’s “Show Me What You Got” that y’all have gotten some recent work in with Just Blaze to give us some more of that dramatic illness.

Mars: Just Blaze is a big brother of ours. He definitely called us in to do the [live instrumentation for] [Jay-Z‘s] “Show Me What You Got”

, and we worked with him on a few other things that we can’t mention at this time. But we do have some great things in store.

DX: Y’all is like – I never seen a producer with a band create that kind of synergy, it’s crazy.

DX: Are y’all giving Will Smith some of that theatrical shit? [Laughs]

DX: What was your reaction though when you got the call to work with The Fresh Prince?

DX: Okay, I just wanna say though I could hear The Fresh Prince on “Martians vs. Goblins”

Mars: There it is.

DX: Since I mentioned Game, you know I gotta ask about this proclamation you made to MTV that Game’s next album will have no name dropping. So what do you do when he says “Dr. Dre” or “Tupac” in his rhymes, give him some sort of electric shock or something? [Laughs]

Mars: Well, as a artist a lot of people operate different ways – with Game it’s easy because he’s a producer at heart. He’s been around Dr. Dre and has been a sponge around Dr. Dre, so he’s made every type of record from gangsta records to Pop records. … So he’s a well-rounded artist. It’s not necessarily that he has to say these things, it’s the fact that people that love him since The Documentary  and people that love him for what he’s done – just like Dr. Dre – it’s kinda difficult to try to move away from that, to a next level, to portray that you’re growing as an artist as well as still catering to the initial fans that you had. There’s certain things that as far as the west coast and certain people that you’ll say people’s names because that’s what you think about when you think about Hip Hop. You think about [Notorious B.I.G.] when you think about East Coast hit Rap. Or you think about Snoop [Dogg] or Dre when you think about Compton. So, us being from this side, of course you have to still have your roots and still touch on history. But, at the same time it’s like, Okay, look, we’ve done that already. [Now] we’re making some music and we letting people know that you can just rap. So, it’s not the fact that he just has to do that; he did “500 Barz”

and it barely had name drops in it. I don’t know too many people that have done that. So, it’s just a [matter] of him really taking his art [to the next level] and concentrating on just really rapping.
ï»¿