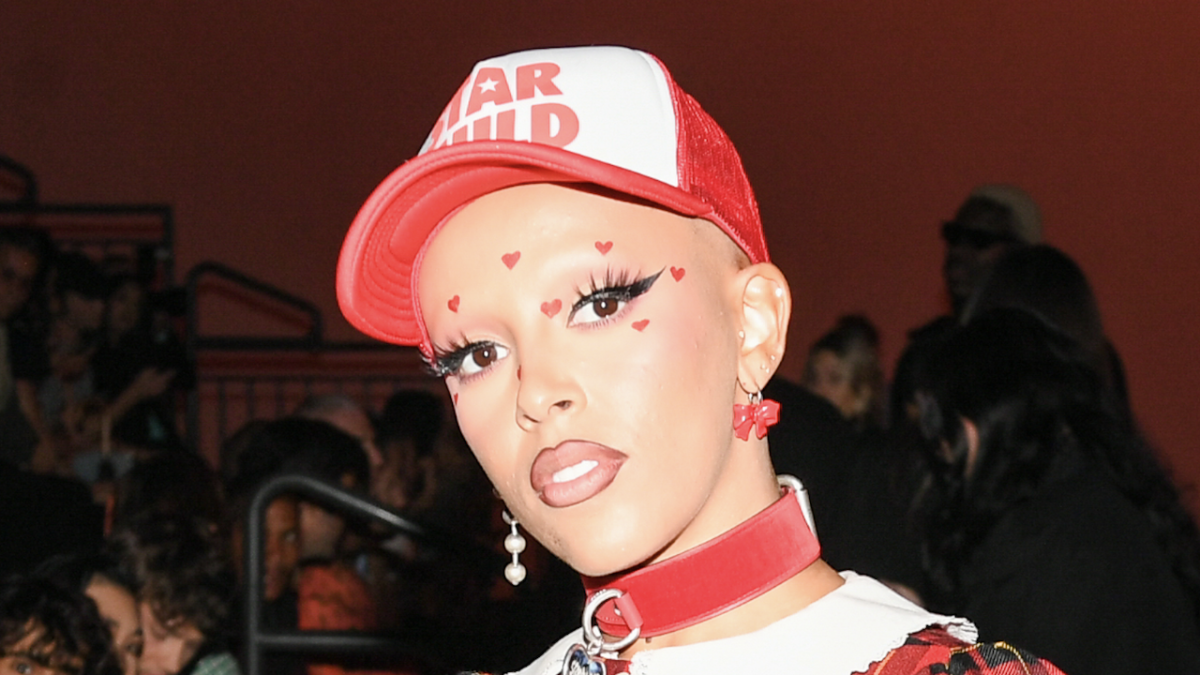 Doja Cat has made waves with her eccentric outfits throughout Paris Fashion Week and she’s added another bizarre look to her repertoire.

The Grammy-winning singer attended the Viktor & Rolf Haute Couture Spring Summer 2023 show on Wednesday (January 25). Doja pulled off a disguise of sorts with a mustache and dark eyebrows that appear to be made up of eyelashes to go with her vintage fit to the Dutch luxury house’s show.

There were plenty of puzzled followers in her comment section while Teezo Touchdown, legendary model Naomi Campbell and J.I.D also chimed in. “Unserious,” the Dreamville rapper wrote.

This wasn’t the only outlandish wardrobe choice from Doja Cat this week as she created “Doja’s Inferno” by covering herself in a diamond-studded red dress with glistening cherry makeup to match, leaving no skin bare to attend the Maison Schiaparelli Haute Couture FW23 show.

The avant-garde outfit was designed by Schiaparelli creative director Daniel Rosebury, while artist Pat McGrath conceptualized the makeup, which, she revealed in an Instagram post, took four hours and 58 minutes to apply.

“Such a pleasure working with the gorgeous @DojaCat and the amazing @DanielRoseberry on the ‘Doja’s Inferno’ look for @Schiaparelli’s FW23 Haute Couture collection,” McGrath wrote along with footage of her finished work.

“Doja’s sublime patience during the 4 hours and 58 minutes it took to create the look with #TeamPatMcGrath, which was covered in over 30,000 hand-applied @swarovski Crystals, was inspiring,” she continued. “The final product was a magical, mesmerising masterpiece of sparkling brilliance. xx”

What stole the show’s attention was the makeup Doja paired with the gown. To complete the look, her skin was covered in red paint from head to toe, to which 30,000 Swarovski crystals were applied, mirroring the skirt’s texture on her upper body and face.

Doja Cat’s New York Fashion Week outfits also made headlines last fall, as documented by NYLON. She appeared at the previous Paris Fashion Week in October with her face and neck covered in gold paint at the A.W.A.K.E Mode; and as a blue-and-white faced alien for another event.

If there’s one thing about Doja, she’s going to keep fans guessing when it comes to her fashion choices, which keep the attention of even the most daring of stylists.