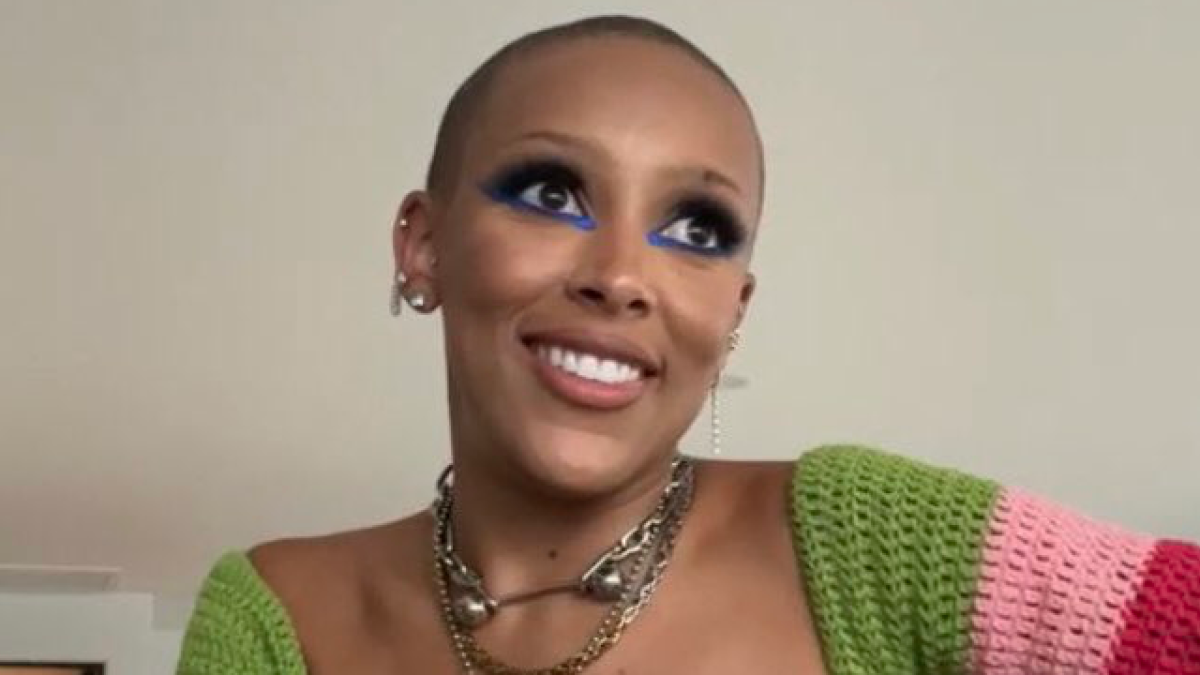 Doja Cat has taken the fashion world and social media by storm after appearing at a Paris Fashion Week show in a look that took five hours to pull together.

The “Get Into It” rapper attended the Maison Schiaparelli Haute Couture FW23 show in one of the fashion house’s high-end looks: a red dress comprising a silk faille bustier, a hand-knit skirt covered in lacquered wooden beads, and matching knee-high boots, according to the designer’s official Instagram account.

What has gotten fans’ attention, however, is the makeup Doja paired with the gown. To complete the look dubbed “Doja’s Inferno,” her skin was covered in red paint from head to toe, to which 30,000 Swarovski crystals were applied, mirroring the skirt’s texture on her upper body and face.

The avant-garde outfit was designed by Schiaparelli creative director Daniel Rosebury, while artist Pat McGrath conceptualized the makeup, which, she revealed in an Instagram post, took four hours and 58 minutes to apply.

“Such a pleasure working with the gorgeous @DojaCat and the amazing @DanielRoseberry on the ‘Doja’s Inferno’ look for @Schiaparelli’s FW23 Haute Couture collection,” McGrath wrote along with footage of her finished work.

“Doja’s sublime patience during the 4 hours and 58 minutes it took to create the look with #TeamPatMcGrath, which was covered in over 30,000 hand-applied @swarovski Crystals, was inspiring,” she continued. “The final product was a magical, mesmerising masterpiece of sparkling brilliance. xx”

In a later post, McGrath shared a behind the scenes look at the intense process that saw no less than five stylists at a time working to, first, cover Doja Cat’s buzz cut pink and blond hair to create a bald surface; then begin to paint her skin before applying the crystals by hand.

“#patmcgrathlabs is PLEASED to PRESENT a fusion of front row with runway, a legendary look inspired by a major persona: @dojacat,” read the BTS caption. “Covered in over 30,000 hand-applied @swarovski Crystals, ‘DOJA’S INFERNO’ celebrates the essence of haute couture with shimmering, sublime sparkle.”

While they weren’t quite as intricate, Doja Cat’s New York Fashion Week outfits made similar headlines last fall, as documented by NYLON. Weeks later, she appeared at the previous Paris Fashion Week in October with her face and neck covered in gold paint at the A.W.A.K.E Mode; and as a blue-and-white faced alien for another event.

In November, Doja said she feels incredibly beautiful with a shaved head and wants her fans to know that they don’t need to try so hard in order to feel the same way.

As the cover star on that month’s issue of Dazed magazine, Doja said in the accompanying interview that shaving her head and eyebrows was an idea that came naturally to her over the summer and that she initially did it for fun, though fans were divided on the new look.

“I have never felt more beautiful in my entire life, which is very strange,”  she said. “I felt beautiful when I had long hair. I definitely felt like a hot girl then, but I always do. There’s something so exhilarating about change; [it] showed me a different side of myself. I feel so new, fresh and sexy. I also feel better without make-up: having this bare head and so little make-up is a fun experience. It’s new, and I love it.”

She did however admit that it took her a few moments to get used to her new look at first.