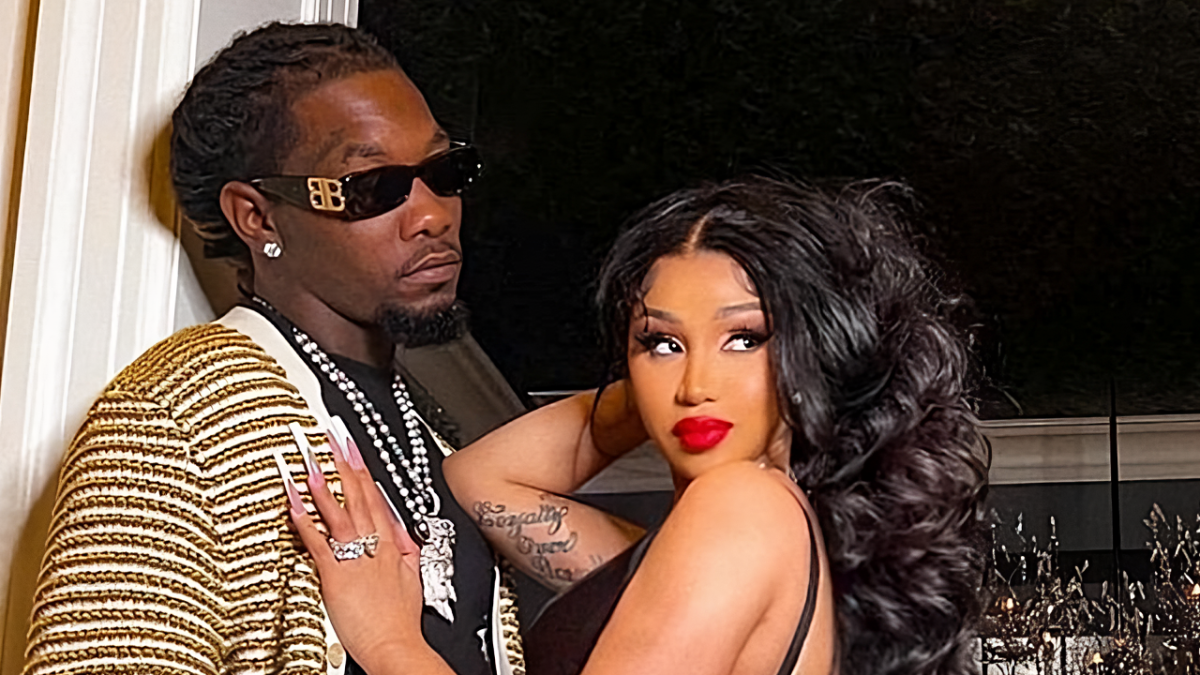 Cardi B has admitted she’s been struggling to lift her husband Offset’s spirits since Takeoff’s untimely passing earlier this month.

In a Twitter voice note to her 26.3 million followers over the weekend, the Bronx superstar detailed the issues she’s been having in working with her husband’s grief. According to Cardi, it’s tough seeing Offset go through the motions, and she warned critics not to play around with her family.

Cardi B’s post came after she became embroiled in a back-and-forth with comedian Nicole Arbour on Twitter over Offset’s music. After Cardi shared a snippet of an unreleased song from her husband containing lyrics like, “Catch a body broad day / Shoot ’em in the hallway,” Arbour criticized the Migos rapper for promoting gun violence in the wake of Takeoff’s shooting death.

“Man… few weeks after his cousin was murdered over a dice game…” Arbour wrote on Twitter. “Offset’s making new music about shooting people and shooting places up. Not a single thing was learned.”

Man… few weeks after his cousin was murdered over a dice game… Offset’s making new music about shooting people and shooting places up.

Not a single thing was learned. 😔

Cardi fired back in a series of since-deleted tweets, informing the comedian that Offset hasn’t actually recorded any new music since Takeoff’s passing on November 1.

“He hasn’t even been to a studio since Take died so wtf are you talking about?” she replied. Arbour then reposted Cardi’s video of Offset’s song, asking fans if she was wrong.

“My bad y’all…” she tweeted. “@iamcardib just posted this and I was sure it was Offset rapping about murder with a fake gun. Honestly, my bad if that’s not what this video is.”

Arbour came back with another tweet doubling down on her disapproval of Offset’s lyrics.

Cardi responded to Arbour’s tweet by bringing up the mass shootings in America that are usually carried out by white men. “Your community don’t sing about mass shooting and fuckin their cousins yet y’all still do it,” she clapped back. “Mind your pink neck.”

Arbour responded: “Your brother in law was just murdered and you’re posting videos about killing people… still!?!? Like still!?!? How aren’t you getting it yet? This ain’t a joke, this is real talk. You are a damn leader and you can make change in the NAME of Takeoff.”

Cardi then threatened Arbour’s mother, claiming she is “going to die,” for which she received backlash from fans. Arbour herself was taken aback by the threat.

“Yo wait. Did @iamcardib just threaten to murder my mom over a tweet about not promoting violence? Is this real life?” she wrote in shock. “Yo @iamcardib you gonna send some guys to beat me up in a strip club now cause the truth is inconvenient to you?? Or just drug me and steal my money? Show some damn respect and stop promoting the murder of black men.”

Yo wait. Did @iamcardib just threaten to murder my mom over a tweet about not promoting violence?

Is this real life? pic.twitter.com/qDWi6VgGvF

Yo @iamcardib you gonna send some guys to beat me up in a strip club now cause the truth is inconvenient to you??

Or just drug me and steal my money?

Show some damn respect and stop promoting the murder of black men.

Cardi continued the verbal beef by writing: “The fact you trying to use the death of some1 I love to get clout is crazy …..I’m not going to do none of that ….I’m just going to pray for you.”

Things took another turn when Cardi B shared alleged tweets from Arbour that contained some racist comments. The comedian claimed they were fake and threw Nicki Minaj’s name in the mix to “set the example.”

Cardi largely ignored the rest of Arbour’s tweets, including one where she tweeted in Spanish so the rapper could “understand” her. The comedian then said she would cover this topic on the next episode of her show, The Arbour Affect, and even invited Cardi B who didn’t accept the offer.