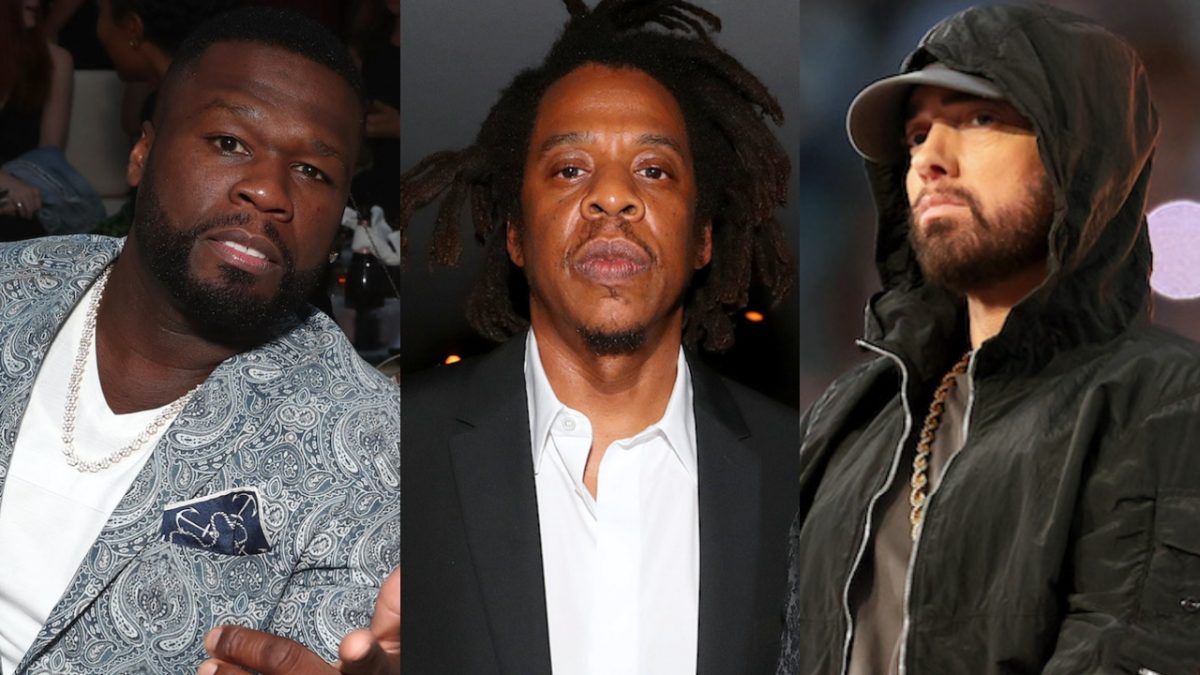 50 Cent doesn’t believe that JAY-Z has had a bigger impact on Hip Hop than Eminem, calling “bullshit” on comments made by former NBA player Jamal Crawford.

The claim was made during an appearance on Shaquille O’Neal’s The Big Podcast with Shaq, where the three-time NBA Sixth Man of the Year used Hov and Em as a gateway to talking about his favorite basketball players.

“That’s why my five, the dominance outweighs the number,” Crawford said to Shaq, who initially disagreed. “Like, JAY-Z’s effect on Hip Hop is bigger than any album sales that Eminem will have, you see what I’m saying? That’s just how it goes.”

50 Cent echoed Shaq’s reluctance in the comments section of Hip Hop Wolf’s Instagram page, which had reshared the clip.

“Ha Bullshit,” he wrote along with a sneezing face emoji.

Eminem’s record sales are nothing to play with. Last March, Slim Shady made history by becoming the No. 1 most-certified artist in the history of the Recording Industry Association of America (RIAA).

The program announced that the self-proclaimed “rap god” had accumulated a total of 227.5 million sales in is career, comprised of 166 million single certifications and 61.5 million album certifications.

He is also one of only seven seven artists in any genre or era with three or more diamond albums thanks to The Marshall Mathers LP (2000), The Eminem Show (2002) and Curtain Call: The Hits (2004).

JAY-Z’s catalog is no slouch either. His blockbuster third album Vol. 2… Hard Knock Life and Watch The Throne collaboration with Kanye West are both 5x platinum, while Vol. 3… Life and Times of S. Carter, The Blueprint 2 and The Black Album are all triple platinum.

Hov currently leads all rappers when it comes to the most No. 1 albums on the Billboard 200 with 14, a streak that dates back to his aforementioned third LP and was kept alive with his most recent solo offering, 2017’s 4:44. Only The Beatles have more with 19.

50 Cent and Eminem have firmly stood by each other over the years. Prior to their historic Super Bowl LVI halftime show alongside Dr. Dre, Snoop Dogg, Kendrick Lamar and Mary J. Blige last February, Em had allegedly told JAY-Z — who helped organize the performance as a consultant for the NFL — that he wouldn’t do the show unless 50 cent was involved.

Fiddy’s contentious relationship with Hov over the years also is no secret. In September, the Power mogul responded to comments made by Young Guru, who said JAY-Z warned his Roc-A-Fella roster about 50’s popularity in the early 2000s.

“Jay walked in the studio, he said it before, but I’m telling you how impactful it was,” Guru said in an interview with Math Hoffa. “He walked in the studio, and he was like, ‘Yo, this dude 50, y’all going to have to deal with him in the next couple of months.’ He said it to the whole crew, ‘You going to have to deal with him.’”

The G-Unit leader caught wind of Guru’s comments and took to Instagram to salute Jay and the iconic engineer for the praise. “I love you n-ggas too,” Fif wrote. “I just need somebody to compete with. It makes me find a way, Jay know I will always find a way.”

“I’m gonna bring, 8 Mile to television,” 50 said in a radio interview, confirming that Em is aware of his plans.

“We in motion,” 50 said after being asked what stage of production the show is in. “It’s gonna be big. I’m working. I ain’t got no duds. I’m batting 100 … I think it should be there for [Eminem’s] legacy because it’s important to me that they understand it.”