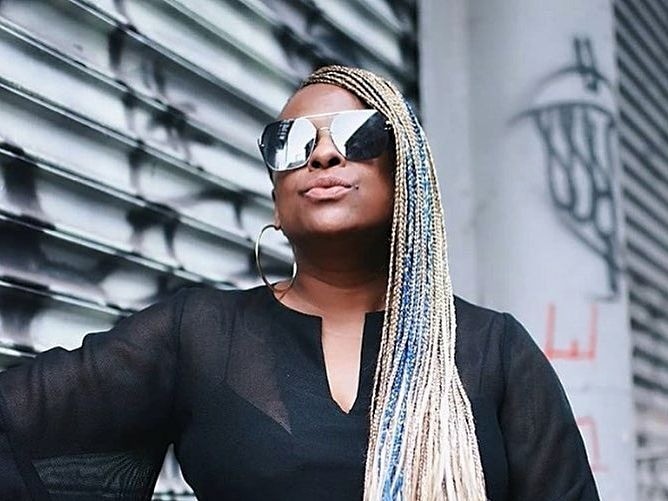 Yo-Yo Continues To Carry The Cross For Future Female Rappers

Things are happening for Yo-Yo again. Backstage at the Eric B. & Rakim show in Denver, Colorado, the Compton-raised rapper’s energy is through the roof. She’s been on the road with the legendary Hip Hop duo for the entire reunion run, and judging by the smile on her face, there’s no place she’d rather be.

But a lot of people need to study up on Ice Cube’s former protégé. The Hip Hop world was first introduced to the fiery MC on Cube’s 1990 classic AmeriKKKa’s Most Wanted on the track “It’s A Man’s World.”

It wasn’t until Unsung released a documentary on Yo-Yo (real name Yolanda Whitaker) in 2015 that she felt people were finally beginning to understand her story. As the mastermind behind the IBWC —Intelligent Black Woman’s Coalition — she’s been advocating for women since the ’90s.

“A lot of people didn’t know the history of Yo-Yo” she tells HipHopDX. “They got a chance to really look inside of who I am as a person, outside of who I am as an artist. I think that helped me because I think they saw more of me as a human being. They didn’t even know I was an activist.”

As the first female gangsta rapper on the West Coast, Yo-Yo broke down barriers and showed other women it could be done, but there was one problem. Yo-Yo wasn’t even 18 yet.

Atlantic Records actually had to wait for her to graduate high school before she could sign a contract. At that age, she was naturally a bit naive to how the music industry works and Yo-Yo admits she wasn’t really being true to herself.

“At first, it was just like, ‘Wow. Mama, I made it,'” she recalls. “I’m not asking, ‘Can I buy a car?’ I’m buying a car. ‘I don’t have to put up with your stuff, I’m moving out.’ But after a while, I would say certain stuff in interviews and didn’t know what I was saying, you know? I was so fake. I was trying to be something that I wasn’t instead of just allowing it to take.

“People would say, ‘What are you doing with your money?’ I’m like, ‘I’m investing it.’ In my mind I’m like, ‘You’re a liar.’ They’d ask, ‘Investing it where? I’m like, ‘In stocks and bonds.’ Those reporters were probably looking like, ‘These young people are so foolish.’ It’s almost like going to jail and trying to act like you’re not scared [laughs].”

Over the next few several years, Yo-Yo released four solo albums, including her 1991 debut Make Way For The Motherlode and 1992’s Black Pearl. While on the road, she forged a close friendship (and eventually romantic relationship) with one of the dancers for Digital Underground — Tupac Shakur. Of course, ‘Pac ended up becoming one of Hip Hop’s most legendary luminaries.

As Yo-Yo’s success continued, she realized she was hiding behind a mask.

“Just the other day I was thinking to myself, ‘Wow. I remember being an artist who felt like I had this prestigious personality,'” Yo-Yo explains. “It was like this out-of-body experience where I couldn’t ride in certain cars. I didn’t want to be seen in certain restaurants. I felt like I wanted to be this superstar. I wanted to be seen in only places that famous people were seen in.”

But all that changed. After leaving Atlantic Records in 1998, her path eventually led her to radio. Through her own show on the L.A. station KDAY, she discovered her passion for mentoring and teaching.

In 2011, she established the first Yo-Yo School of Hip Hop in South Central L.A., which aims to empower young women through the culture. Since then, she’s learned fame and fortune was never what life was about. [apple_news_ad type=”any”]

“Thinking about the younger generation [of rappers], I think about how free I am,” she says. “How I walk through the airport, people give me love. It’s different. They hug me and they say, ‘Oh my God.’ They’re like, ‘Am I bothering you?’ I’m like, ‘No.’ I let the walls down.”

At 46 years old, Yo-Yo’s a lot wiser and has daughters of her own. But she sees there’s a lack of leadership and sisterhood, and she’s more adamant than ever that women stand up and use their voices.

“I tell young women, ‘Listen. Being loud doesn’t always mean you’re the wild and loud girl.’ Sometimes, being loud and wild is just the fearless girl, and being shy doesn’t always mean that people perceive you to be this innocent, really cool chick. It really means that sometimes they look at you like you’re the girl they can take advantage of. You’re not gonna say anything, you’re the girl that could really keep a secret. They try to play off of that. I try to teach that to girls — to not be another #MeToo.”

in the mist of things! “March for our lives” #marchforourlives

As Yo-Yo is getting ready to pack up and leave Denver’s Fillmore Auditorium to head to her next stop on the tour, she ends the interview with an anecdote.

“Girl, I had the cookie,” she says with a laugh. “I’m painting my house. I’m outside. I got my brothers in there. My girlfriend comes by and she’s like, ‘Hey, what are you guys doing?’ She like, ‘Oh. My brother made these cookies. You want to try some?” I’m up on the ladder, I got the cookie in my mouth, I’m painting. I’m just eating away, and then I get off the ladder off the thing and I go into the house. I’m like, ‘Something’s not right.’

“I was on the floor. You know how you draw out a dead person? I had my face on the granite. I was laid out so hard and I was like, ‘Oh my god.’ My daughter was like, ‘What’s wrong with my mommy?’ My brother said he was talking to me the whole time.’ He said, ‘You wasn’t saying nothing.’ He said the only thing I was saying was, Stop it.'”

Yo-Yo was so concerned about her condition, she started making frantic phone calls.