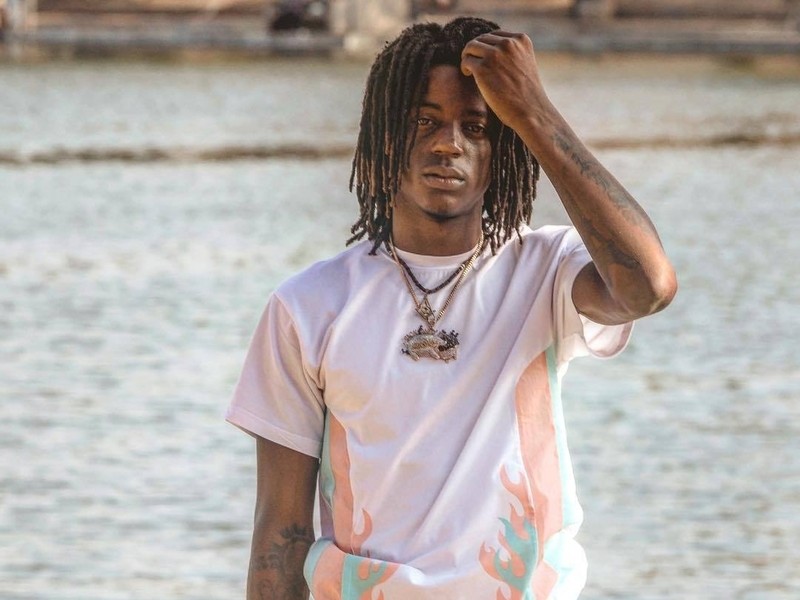 At just 20 years old, Alabama rapper OMB Peezy is already making a name for himself in the rap game, signing a deal with 300 Entertainment earlier this year. Moving to Sacramento at the age of 12, Peezy’s talents behind the mic eventually caught the ear of E-40, who eventually signed Peezy to his Sick Wid It imprint.

Having 40 as a mentor taught Peezy the ins and outs of the rap industry. Beyond delivering “rap with substance,” the “Lay Down” rapper prides himself in telling his story and coming out of the streets.

Prior to his set on the L.A. stop of Tee Grizzley’s Ain’t It A Blessing tour, HipHopDX had the pleasure of catching up with OMB Peezy to discuss his come up, his new Humble Beginnings EP, his daily weed consumption and his desire to work with his idol, Boosie Badazz.

HipHopDX: Who is OMB Peezy?

OMB Peezy: Young street nigga from Mobile. That’s about it.

Peezy: Murder, murder, murder, kill, kill, going through … I’m just fucking with you. My music is the product of the modern day street. Society.

DX: Do you identify more with Sac or Alabama?

Peezy: Oh, no [laughs]. Every time I walk on stage, it’s homegrown. Ask the fans. I see you ain’t never been to one of my shows before. Believe it.

Peezy: That shit feel good. I fuck with 40. And people from my city know 40 too. So that made it feel better. Ya feel me?

DX: What’s the greatest thing you learned or greatest piece of advice you received from E-40?

Peezy: If you throw something at the wall, eventually it’s gon’ stick. You gotta keep making music, basically.

DX: Nef The Pharaoh actually played your record for E-40. How much credit does he get in your career?

Peezy: He gets a little bit of credit in my career, fasho, ‘cause he helped me out a lot. He was bringing me out at hella shows and shit. Ya feel me?

DX: Did you anticipate how popular “Lay Down” would be?

Peezy: Yup. My nigga told me that muthafucka was going to jump, so I believed him.

DX: How much has life changed since you released the single?

Peezy: A lot. Over the past nine months, I’ve been fucking around. Ya understand me?

Peezy: I’ve been fucking fucking around.

DX: You talk about rapping with substance. What exactly do you want people to get out of your music?

Peezy: Shit, my life; my story. That type of shit. Muthufuckas don’t be having no substance. Muthafuckas don’t be going through no struggle, so they don’t know how to rap about the struggle. I want muthafuckas to get the real struggle.

DX: You’re only 20. How much life experience do you really have?

Peezy: A lot. I got a lot. Believe the fuck out of that.

DX: How much weed do you smoke?

Peezy: I smoke like … a half a day. A little bit over a half.

DX: You also talk about longevity. How do you plan on advancing in this rap game that is so saturated with up-and-coming artists?

Peezy: Oh shit, just doing me. Ya feel me? ‘Cause I ain’t gonna ride no wave. I’ma build my own wave. ‘Cause soon as that wave that you riding crazy to the muthafucka surface, that shit dead. You gotta have your own wave. You ain’t going to be able to do nothing else. Soon as that shit die down, you gon’ be so used to that wave you was riding … it’s over. That’s why I gotta build my own shit. Street shit.

Peezy: I get high in the studio and write to any beat I like. And then I get a numerous amount of producers that come in and show me beats. And then I just pick out all of them. I build packages and shit.

DX: Tell us about the making of the Word of Mouth documentary.

Peezy: Oh yeah. They was following me around and shit for a little minute. Going to my house and shit. That’s like … I was basically showing them my coming up stage on some young nigga shit.

DX: How you dealing with the fame?

Peezy: I’m coping with it nicely.

DX: You living that rapper lifestyle or what’s going on?

Peezy: I don’t really want to live no rapper lifestyle, ya feel me? But the fame? It’s cool. I’m coping with it and shit. I like the money part though. Believe it.

DX: Yeah? What’d you do with your first bag?

Peezy: I bought some cars. I bought a Benz S 600. I fucked up in five days. And then I had the baby blue S 550 with the baby blue tints. That muthafuckawas clean. I got into it with the dealership. They were on some big shit. And that’s when I noticed, I’m not putting no more cars in my name. Fuck that. I ain’t putting no bank in my business. I’m buying my shit. I need my pink slip.

DX: What are you spending on nowadays?

Peezy: Food, weed and I’m stacking my money. I’m not really stacking no cheese on no bullshit.

DX: What would you be doing if you weren’t rapping?

Peezy: I’d be writing books. And robbing. I’m fucking with you [laughs].

Peezy: Yeah, I like to read. The book I’m reading right now is How to Win Friends and Influence People.

DX: Tell us about your EP with Cardo.

Peezy: Cardo Got Wings! That shit was clean. I fuck with Cardo. Shout out big bro.

Peezy: I ain’t gonna lie, we never really got the studio. He was sending me hella packages and beats. I tell you one thing: he don’t never stop sending beats. On my momma.

DX: Why title it Humble Beginnings. What’s that about?

Peezy: That’s my stamp. That’s the beginning shit before … it’s the pre-warm up to Loyalty Over Love.

DX: What can we expect from that project?

Peezy: I’m on my bullshit. I’m just fucking with you [laughs]. I’m talking a lot street shit, about my come up, my struggle. That type of shit.

DX: What mainstream artists are you listening to?

Peezy: I ain’t really trippin’ off no features right now. When I was a young nigga, I used to dream I would be in songs with niggas. Right now, I’m doing my own shit. I’m trying to focus on telling my story right now.

DX: There has to be a rapper you want to work with.

Peezy: Shit, the rapper I want to work with … Shit, he know me by my name. He see me. He call my name. Shit, everybody know who that is: Boosie Badazz. Boosie, we gotta get some shit in though. I gotta send my nigga a track or something.