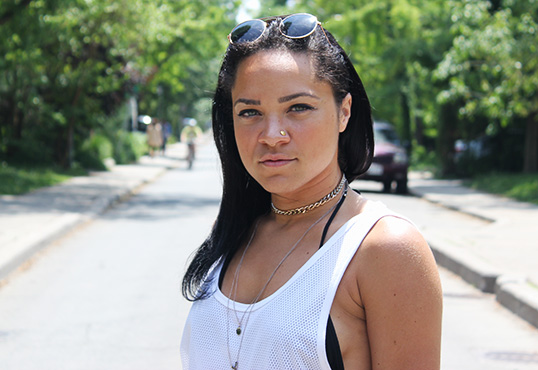 Tasha The Amazon & The Dark Side Of The Party

There’s a dark side to Tasha The Amazon’s latest release, titled “Picasso Leaning.”

It’s a party song with a catchy hook, yet it’s still cut with darkness and menace — something that might play at a club so dimly lit that it’s hard to tell if the people around are smiling or baring their teeth threateningly.

The Toronto-based MC sums up the tension between the good and the bad times that can often follow when she raps “Oh God I pray that we don’t get dependencies, oh God I pray we don’t run out of Hennessy.”

HipHopDX caught up with Tasha at Trinity Bellwoods park in Toronto recently to get some insight into what inspired the music.

“I go out a lot and I probably drink way too much … so I think about it a lot,” she says. “I mean, we’re all intelligent people and have got shit to do, but for some reason the sun goes down and we all get shitfaced. Some people glorify it but there’s a dark side to it too. There’s escapism going on there that we have to look at to be able to grow as people. That definitely finds its way into my music.”

She’s been making music as Tasha The Amazon (with her Bass & Bakery production partner Danthrax) since 2013, but there’s been an uptick in attention in the last year or so, partly from the buzz Drake and The Weeknd’s success have generated for the city’s music scene, partly from a prominent feature on Comedy Central’s “Broad City” and partly, she explains, because the music has improved a lot.

So far she’s worked with NYC rapper RetcH on a track, and has played shows with Isaiah Rashad, Action Bronson and “most of Wu-Tang” but is quick to name Pusha T as her dream collaboration, mainly because “he’s the dopest.”

The classically trained pianist-turned-producer (four hours a day at her peak) comes from a musical family, with well-known composer Robert Schumann among her German ancestors and on her Jamaican side, reggae legend Peter Tosh.

She says her studies of classical music are a more passive influence, and that it’s her love of dancehall that is predominantly informing her sound right now, which, she says, is centered around “bass and gully-ness.”

For someone called The Amazon, Tasha isn’t as tall as you might think. The name, she says, comes from her big personality.

“The Amazons are a really cool concept,” she explains. “Just the idea of a whole culture of women who are warriors. That resonated with me. If I came from some mythical tribe, that would be it. Running through the jungle with some spears — and a tiger.”

Plus, she actually already knows a tiger.

For the 2014 video for “Thru the Fire,” she shut down a Toronto street in the middle of the night and roamed around with Robbie, the same tiger Justin Bieber was recently spotted with at his dad’s engagement party extravaganza.

The idea of getting the animal started as a joke, but then her team started looking into renting the tiger, hiring cops to shut down the block, and getting approval from nearby businesses. Before long she was walking a Bengal through Toronto’s Kensington Market neighborhood.

“It was a surreal night,” she said. “The truck rolled up and the handler opens the door and this massive beast comes out. He’s like 800 pounds and like eight feet long. And all the guys like, flee, and I’m there face to face with this massive tiger, like ‘Ok bro it’s you and me, let’s do it.’”