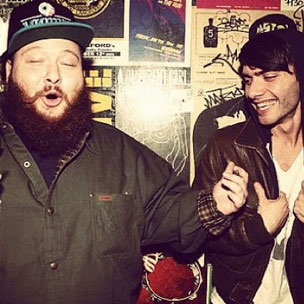 Since releasing Blue Chips with Action Bronson in 2012, Party Supplies has remained a mostly cryptic production credit. Even after releasing a full-length debut on Fool’s Gold Records last year with two members on the cover, many Hip Hop fans have Party Supplies pegged as a single guy. Besides the latest collab with Bronson on the second installment of Blue Chips in 2013, Party Supplies released an album that can only be described as Pop and “super to the point” by its own creator.

Justin Nealis, who was previously known individually as Party Supplies before and directly after the first Blue Chips, spoke exclusively to HipHopDX about working with group member Sean Mahon, releasing their debut album and Blue Chips 2 in 2013, and announced having worked on new Action Bronson material cooperatively with Alchemist at the tail end of last year.

“Our album was the 13th best dance album [of the year] by Rolling Stone,” Justin said of the duo’s debut, Tough Love. “But definitely Blue Chips overshadows [Tough Love] because of Action’s popularity. At the end of the day, there’s a crazy link between it, because Action is the biggest fan of that album. He’s likes that album, I’m not even kidding, more than anybody I know. His favorite songs off the album are the songs that nobody else likes—not likes—but didn’t favor as much. He likes that sound, he understands exactly what we’re doing with that record. I may do some INXS shit with Bam Bam, and have him singing, and just flip it on people for one record. We’re gonna bridge that gap because that gap needs to be bridged.”

Justin Nealis Clarifies That Party Supplies Is A Duo

“There’s definitely some confusion there, and I definitely want to clarify that for you. Party Supplies is me and Sean,” Nealis said of collaborator Sean Mahon. Even Rolling Stone’s mention of Tough Love—the duo’s first ‘solo’ album—as the 13th Best Dance Record of 2013 wrongly attributes Party Supplies to Nealis despite the description being flanked by a photo of both members. Justin, who remains an obvious front-man for the group in 2014, explained the confusing ‘coming out’ process as a function of odd initial publicity.

“I just maybe had YouTube videos of me playing the MPC,” he said, “And after I put those out, I started getting booked to perform with the machine. One of the gigs was in Australia—a lot of Canadian gigs. But unfortunately, at the time, the promoter couldn’t really afford to fly out two. And I needed the bulk of the money, because the rent is so fucking high in Brooklyn. I needed the bulk of the money from the promoter just so I could keep my studio going and everything going. So because of financial reasons, people know me as a one-man [act], because when you play shows all over the country and people start to recognize…and those go on the Internet, and that’s kind of the beginning of all the confusion.”

Nealis, who is a Long Island native living in Brooklyn, added that many groups have undergone similar changes. “But it’s really my fault, because I should have differentiated. I should have known,” he said. “But at the end of the day, you look at a million bands and acts throughout history that have gone through so many weird changes, so it’s not weird for me to bring in Sean. Dudes like Fleetwood Mac, the band had a completely different lineup by the time Stevie Nicks had joined.”

The decision to appear explicitly as a duo on the cover of Tough Love was a calculated step in the opposite direction Nealis added. “With the Tough Love record, that’s why I put him on the cover,” he said. “I told Nick and A-Trak over at Fool’s Gold when we were doing the cover, I was like, ‘I want him on the cover, because people don’t know, so you gotta tell them.’ And there’s no better way of telling someone than to just put us on the cover. Because then that goes on every blog with that photo, and everybody instantly views you as a two-man act.”

By Nealis’ own account, Sean plays the position of multi-instrumentalist before things are often fed into his MPC. “He can just come down, smoke some shit, chill out and play around with the piano for an hour,” Nealis said. “The next thing you, know he’s got a little four-bar thing going, and it’s like, ‘Okay, I’m already starting to hear the melodies and shit.’ And I’ll just loop it up on the MPC… He passes the bar to me, and I take it from there. It is a two-man thing, and we’re not gonna add a drummer or anything like that. We’re just trying out cool, innovative ways to do it live.” A representative for the duo confirmed both members would perform alongside Action Bronson at upcoming shows in New York City.

Besides solidifying Action Bronson’s position as a simultaneously charming and crass newcomer within Hip Hop, the first Blue Chips also broke Party Supplies onto the scene. The momentum from two Blue Chips projects carried over, and Nealis confirmed Party Supplies will be logging time with another frequent Action Bronson collaborator.

“We went out to LA with [Bronson] last month—me, him, Alchemist, and Sean recorded an entire EP of material under the name Jericho,” Nealis said. “Jericho may be a project that we drop, that’s really under-the-table, no one knows about that yet. Jericho may just be like a multi-genre, no label EP that may cross genres from Hip Hop to Electro to ‘80s Pop. We may bridge the gap with that actually, because some of the stuff we recorded for that, one of the songs sounds like a late ‘80s Smokey Robinson record and shit. And then, there’s some Surf Rock on there that sounds like the Beach Boys and Bronson’s rhyming on it. Alchemist made the beat. We rented pianos and keyboards. We rented a Wurlitzer, we rented a bass, we rented a few guitars and shit. We recorded a lot of original material that kind of has a very Electro sound and we’re calling it Jericho.

“We may bridge the gap with that. In terms of me and [Action], he understands the music that I’m making, he’s one of the biggest supporters, he saw what I was doing. People will start to realize what I did there soon as we put out more material and just play more shows and shit.

“Like The Black Keys, they blew up in rock and had a few rock records out, and then they went on and used that leverage to call up Raekwon on that BlakRoc shit. Which is cool, but it’s like, I got my feet dirty in Rap for many years, and I been in this shit for many years, only after I found a little bit of success with Rap that I got enough confidence to drop the Tough Love record, which is the opposite of what the Black Keys did. There’s really never been someone who was kind of like starting out doing stuff with Rap and made a name for themselves as a Rap producer and then went ahead and put out an album that sounds like fucking—I mean I don’t even know, it just sounds like pop. The only way I can describe that album is pop. There’s no dreary melodies, it’s super to the point.”