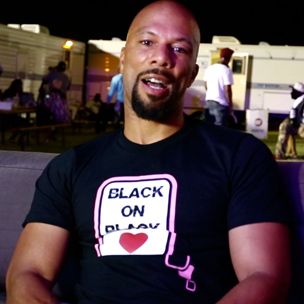 Common Speaks On Violence In Chicago & His Role In G.O.O.D. Music

Despite drawing what the average, blue collar Hip Hop fan would consider an enviable income from Hip Hop and acting, Common is very much in tune with the people. The RIAA lists Be, Like Water For Chocolate and Finding Forever all as albums to have sold 500,000 or more copies, and he’s shared screen time with the likes of Angelina Jolie, Christian Bale and Denzel Washington. Despite the accolades, Common walks the grounds of “Rock The Bells: Los Angeles” holding court with fans, media members and fellow Chicagoan Fred Hampton Jr.

None of which is to say Common’s acting gigs and visits to The White House have derailed his Rap career. According to Comm, he still has plans to release an EP followed by an album in 2014. He credits Vince Staples, the local Chicago scene and his G.O.O.D. Music brethren among his many current inspirations. And, while HipHopDX’s cameras rolled at dusk, he discussed all the above and more.

HipHopDX: You’re a legend in this game. At this point, what motivates you to keep going as hard as you do?

Common: I love Hip Hop, and I love emceeing. I feel like I’ve been blessed with the opportunity to fulfill my dreams, so I want to fulfill it to the highest. I was just talking like, “Man, as long as I’m alive and living, I want to be able to make music, write songs and rock shows.” I love the music, and that’s what gets me going. I always strive to be the best I can be, and that’s why I’m always gonna go hard no matter what. It comes from the heart.

DX: You’ve been around in several eras, and you’ve always stayed relevant without necessarily changing yourself too much. You don’t go out of your way to fit in, how do you always stay current as music changes?

Common: Well, I stay in tuned with what’s going on in music. I try to grow within myself. Just because I see something may be popular, I’m aware of it, but that doesn’t mean I’m gonna go out and try to emulate that; I’m not gonna try to imitate that. I’ll be like, “Man, that’s cool what they doing,” and then I’ll also let that be a motivation to come up with something new within myself. I always feel if you grow as a person, you can grow as artists, or whatever your profession is. I’m always striving to grow. Whether that means spiritually as a man, as a person socially in my life, in music and different art. I always look at and try to digest new stuff, and when I do that, it allows me to have something new to talk about. I’m always trying to look at new styles. I feel like when you have a passion for what you do, you can grow with it. [I want to be] relevant…relevant is being true to you and making sure you’re giving your all. [It means] never folding for what people want you to do.

DX: You mentioned passion, and you’ve been heavily involved in acting, yet that hasn’t really affected your music. How is it that you go so hard in the acting field yet keep bringing it with the music?

Common: Its funny, man. Chris Rock said to me one time, “Why y’all rappers, when y’all start acting, your raps get weaker?” I was like, “I hope you ain’t referring to me.” I actually feel like I’m still growing, and I’m still getting better. When I put my all into it, which I do, then it is evolving and elevating. I think I do it just by putting my heart and soul into the music that I do. I also—when it’s time for me to do a film—I give my energy and time to that film. I make sure I do that, whether it’s the television show, “Hell On Wheels” or whatever I may be doing as an actor. I just make sure I give it the proper attention and not just be like, “I’m gonna hop over here.” It’s like they’re your children, and you gotta take care of them.

DX: What’s the next project you have coming up?

Common: I have an EP that I’m working on [and] I really only have completed a few songs. I’ve been saying it’s gonna come out, but I haven’t finished it because we were filming “Hell On Wheels.” I’m working on it right now; it’s an EP that I’m real enthused about. I did something with Swizz Beatz already, I did something with No I.D., and I got my man Vince Staples on the song, that I really… Man, I like him. He’s cold on the mic, and when I heard him rapping, I was like, “This dude can really rhyme.” It made me want to write. I only got a couple songs, but I’m gonna get the EP done up quick. Then I’m gonna release an LP sometime at the top of next year.

DX: You spoke about the people on the album. Will any of the G.O.O.D. Music artists be on the album? How do they affect your music, and how do you affect their music?

Common: Ah man, all of the G.O.O.D Music artists have something special with the talent. Each one brings something unique, and I get influenced and inspired. Even when we were working on the G.O.O.D. Music album [Cruel Summer], it was like—being around Big Sean, and hearing Pusha T’s rhymes, and then getting to hear 2 Chainz—it took me somewhere else. Anytime an emcee is on a song with other emcees, he wants to be the best. It made me want to grow, like, “I gotta come with it.” Just being around them, and seeing the way they work, it was not only a collaborative thing. They’ll knock out a song quick, and I take a while to write a song sometimes. But now it’s like, “I might as well just knock this out real quick,” and it feels right. It’s not like I’m giving less; it’s just that spontaneous thought. They inspired me in those ways, and the way they are pushing the music forward. Kanye is one of the greatest artists we’ve seen in our time. I’m always inspired by what he’s doing. Kid Cudi—even though I know Kid Cudi isn’t officially G.O.O.D. Music—he’s still part of the G.O.O.D. family. He’s always doing something new. Pusha, Cyhi… When you hear Cyhi rapping, you’re like, “Damn, that’s emceeing right there.” It makes you want to go hard.

DX: In terms of pushing the music forward, you’re one of the original cats from Chicago. Right now Chicago has a pretty active scene, Chance the Rapper and Chief Keef to name just a few. What do you feel about these younger cats coming out of Chicago?

Common: I love that we got the Chi coming tough like that. It’s like—from Chief Keef, to Chance the Rapper, to King Louie—them dudes all got they own thing. It’s dope. It makes me proud to know that they from the crib, that they from the Chi, because they all got they own sound to them. With that sound, they’re bringing something that’s impacting people around the world. Chance is doing shows out in the world off his mixtape. You’ve seen the type of impact Chief Keef had, and when I hear King Louie rhyme, I’m like, “Damn, he saying some stuff.” I’m real geeked up about the Chicago movement. All the young Chicago coming up, they taking the Chi forward by just being who they are and bringing music they love to do. And it’s good music; it’s good Hip Hop.

DX: Let’s stay on Chicago. Recently, Chicago has been getting a lot of attention for violence and things of that nature. As someone who grew up in Chicago, do you feel there is a real difference between Chicago now as opposed to the Chicago you grew up in?

Common: Chicago has always been a tough city. It’s not something that I’m like, “Let me brag about how tough Chicago is.” We not like proud that young people are getting killed. We want to stop that, and we want to stop the violence. It is different, because in my day it wasn’t as many people getting shot that were innocent. Sometimes that did happen, but it’s happening more and more now, and that saddens me. It wasn’t as many young people shooting each other. The violence was there, we were part of it in some ways, but not to the extent that it is now. We want to stop it more than anything. When I talk about it now, I talk about it in ways that we can get solutions. I got a foundation that is really there to try to help young people in Chicago and all over the world, but it’s many people in the trenches…in the field really doing work to try to help young people. We just gotta reach out on that level. Nobody wants to be proud saying, “My city is people shooting up each other,” That ain’t nothing to brag on. We want to live good, and we want to live healthy and wealthy.

Common: I feel like Barack Obama is an incredible human being that wants the best for a lot of people in this world. He strives to do his best within the political structure. Once you get into politics, it’s always gonna be difficult to get your truest agenda there. It’s like us in the business sometimes. People deal with politics in the entertainment business, and they really true to the core are like, “I love this music.” But sometimes you gotta network and deal with this. Sometimes you might interview somebody you don’t even like, but you respectfully do it; that’s part of the politics. I think the president has done a great job, and I feel like his heart and his mind is in a place to do the best for the world and the people of America. I’m gonna always support him. I’m a believer that’s like, we can’t expect perfection from no human being on this earth, but we can say this man, his actions and his intentions are in the right place.

DX: I gotta ask you another Chicago question, because you are Chicago. How did you feel about the Derrick Rose situation?

Common: I gotta honor D. Rose. D. Rose is one of the most incredible basketball players we’ve seen, and I love his game. I felt like he knows who he is, and he knows when he’s ready to come back. It might not have been time for him to come back. Can’t no doctor tell you how you feel, and a coach can’t tell you. The media can’t tell you. I feel D. Rose is…when it’s time, he’s gonna come back, and he’s gonna come back better than ever.

DX: We know you gotta go kill the stage. Before we let you go, what are you listening to as far as the newer cats in the game?

Common: I like Vince Staples’ stuff, as far as the stuff I hear from him. I like the stuff I’ve heard from Chance, I like King Louie and I like Kendrick Lamar. That’s a lot of the newer stuff, where I’m like, “Yeah, these dudes be rhyming.” I still—even though they ain’t newer—I still check ‘Ye. I like what Pusha be doing.

RELATED: Common Explores Collaboration Chemistry With Nas And No I.D., Breaks Down Lines From Classic Songs