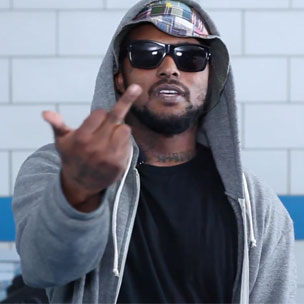 When ScHoolboy Q’s daughter sees her father heading out of their home, she knows exactly where he’s going.

“She been knowing it since she was born,” he says earnestly, taking off the shades that covered his eyes earlier this evening. “Every time I walk out the house, she asks, ‘Where you going? The studio?’ It’s the first thing she say. She don’t say, ‘You ‘bout to go with the homies? You ‘bout to get some weed?’ She say, ‘Where you ‘bout to go, the studio?’” He looks up for a moment, his eyes filling up with a sense of honest joy. “I’m kind of proud of that.”

This is where ScHoolboy Q finds himself on this evening, surrounded by cameras, photographers, videographers and journalists, wishing he could be spending time with his daughter. Moments ago, he had a straw hat on to match those sunglasses, giving him a very guarded look. Guarded, but not timid, Q was still wildin’, smiling and cracking jokes with those in the room, a camera in his face, lights ricocheting off of his shades. But when he sits down for this interview, he finds a moment to get serious, sitting on a stool in the corner of a room within the House of Blues. He checks his phone before putting it away, sees some messages and then takes off his shades while answering that last question, revealing honesty above the “Q” tattoo that adorns his upper right cheek and the note that appears on the left.

“I haven’t even raised my daughter yet,” he says, with a hint of disappointment in his voice. “She’s four years old. That’s how long I’ve been grinding, trying to get to this spot.”

ScHoolboy Q Recalls Rappers Who “Had A Chance” To Join TDE

In fact, it’s been a little more than four years now. In 2008, Q dropped his first mixtape, Schoolboy Turned Hustla. That tape laid the groundwork for what would eventually become an important run with Top Dawg Entertainment. But he’s quick to point out that those weren’t easy years and this wasn’t an easy grind.

“Many rappers came through our studio in Carson,” he explains, talking about Top Dawg headquarters in that now famous Carson cul-de-sac in Southern California. “Everybody didn’t survive.”

The studio was a hub for up-and-comers with a revolving door of talent. However, not everyone carried on.

“Niggas that’s rappin’ right now, that’s getting buzz or whatever, they all had they chance to be from TDE,” ScHoolboy adds. “They’ve been in that studio. All these niggas that’s poppin’ out there, they been in that studio. Everybody doesn’t make it. Everybody doesn’t want to be a part of something. People slept on it and couldn’t be a part of it. Some people, they didn’t make the cut [laughing]. I was one of them dudes who made the cut.”

Making the cut meant ScHoolboy was able to release his next major project on TDE with 2011’s Setbacks. By this time, Q knew that his path led to Hip Hop, away from the streets where his path may have led to in the past. This is when Q feels he became a better emcee. This was when he earned some respect for the release and even more with the one that followed, last year’s Habits & Contradictions. In the midst of all this, label mate, friend and fellow TDE studio spitter, Kendrick Lamar pretty much took over the Rap world.

Last year, Kendrick Lamar dropped good kid, m.A.A.d. city to critical and commercial success. The album has already been certified Gold by the Recording Industry Association of America, and he was named “Emcee of the Year” by HipHopDX. He also earned “Album of the Year” honors for the disc, making him one of the most celebrated artists in music today. None of this is lost on ScHoolboy. Instead, it inspires him.

Where many others might feel jealousy building over a label mate’s success, Q doesn’t think that way. Instead, he focuses on those accolades as a motivator. His excitement for Lamar is sincere when he talks about these achievements, saying it drives him to be “better.”

“I strive to be better than Kendrick, Ab-Soul and Jay Rock,” Says Q. “You have to compete. You can’t just let them niggas just keep shootin’ over you. Especially Kendrick, at the rate he’s going and progressing in this music. It’s inspiring. It’s crazy. I’m glad he dropped [good kid, m.A.A.d city]. If he didn’t drop that album, there’s no telling how good my album would’ve been. It’s competition. I gotta be better than his shit or just as good. It has to be just as good or better.”

Those aspirations have been strong since his first release. The introductory lines on his first project were telling. “You’re now listening to the greatest,” he says on  “Listen To The Schoolboy” off of Schoolboy Turned Hustla. That bravado and perseverance is an important element to survival in the music industry, an industry that isn’t always kind to the nonbelievers or the unmotivated and self-destructive. Q knows this and says it’s why he’s a part of TDE today.

“Some people just look at it as if you’re wasting your time. Some people look at it as a hobby,” he says, reminiscing about the revolving door of rappers coming through TDE’s studio, explaining his own resolve. “Some people was really serious about it and then just fell off.

Simply coming back wasn’t enough. ScHoolboy used each opportunity as an important step towards improvement. According to Q, he’s approached his upcoming album, Oxymoron, through the same lens with progression being a valuable element in the process.

“Just being more comfortable…I feel like, all rappers, the more comfortable you are, the better your raps are gon’ be,” he says, speaking about how he’s evolved as an emcee. “When I was in the studios [before], I wrote the verse, and I wasn’t comfortable, but I just did it anyway. The more comfortable you are with your music, the iller you gon’ get. You feel confident and comfortable in your voice and find yourself. You’ll be all right, regardless. You gone talk about your life and keep it real, and you never gonna run out of something to say.”

Oxymoron is yet another sample of what Q’s got to say. While he’s remained mostly silent about the album, it has been revealed that he’s collaborated with several artists for the project including 50 Cent, Pharrell Williams, Mac Miller, A$AP Rocky, Danny Brown and his fellow Black Hippy comrades. Whether they make the final cut or not has not been officially publicized. Still, it’s safe to say, Oxymoron is one of the most anticipated releases of the year.

See today, much has changed beyond Q’s evolution as an emcee. With the rise fellow Black Hippy members’ careers and his own successes, TDE’s stock is at an all time high. Currently, Top Dawg Entertainment is looking like Tupac in ’96—“All Eyez On Them.” Ab-Soul, Jay Rock, Kendrick and ScHoolboy are at the center of it all, releasing critically acclaimed projects with what seems to be great ease. But in fact, there’s a lot of pressure that comes along with this much shine. There’s a lot to carry.

“Shit is stressful,” he notes, analyzing his past year. “I never knew it could be this stressful ‘cause with Rap, you put it out and it’s good. And I listen to some of my old stuff, when I thought it was tight, like, ‘Yo, it wasn’t ready.’ All types of shit. The business of it I don’t like. I don’t like people. You gotta be willing to make that sacrifice and do it.”

Sacrifice has been another important part of ScHoolboy’s life for the last four years. And while today seems quite different from life in 2008, ScHoolboy says he hasn’t changed much. Let Q tell it, life has changed a lot, but the gradual change has made this all seem as though the success “just happens” before you even know it.

“It just happens,” he begins. “One day you chillin’, then one day you getting paid for a show. ‘All right, cool.’ The money be getting higher and higher. ‘All right, cool.’ And then the press and all this shit is getting higher. Then more people stop you, and it’s like, ‘All right, it’s crackin’ [laughing]. It just happens.” Through these changes, however, Q says some things have had to stay the same. “Somebody real genuine today in music or someone who just came up don’t really switch up. You just stay the same. You don’t really notice it. When you genuine, you’re working hard on your music. You dedicate yourself.”

This is why it’s so difficult for Q to leave home sometimes, to get to the studio. The emotional roller coaster he has been on likely makes it hard when he has to say goodbye. But when he says he wants to be a better father, how can you doubt his perseverance? Perhaps this is why he has opted to have his daughter join him for his latest project, where she will reportedly speak throughout Oxymoron.

“At the end of the day, my daughter’s happy,” he says, pride emanating from his voice. “She understands. I just gotta make myself understand.”