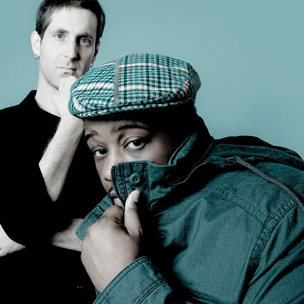 Phonte Coleman has come far through endless determination and musical ingenuity in the 10 years since his former group Little Brother dropped their pivotal debut, The Listening. During this time, he formed a partnership with Dutch producer Nicolay. It’s a partnership that has since produced three albums and a fully independent business under their own banner.

Just released, The Reworks gives new life to fan favorites from the Foreign Exchange’s catalog with productions from the likes of international sensation 4Hero, ?uestlove and James Poyser’s Randy Watson Experience and Tall Black Guy (considered by many to be reviving soulful Hip Hop within the underground), as well as and FE’s own instrumentalists Zo! and Nicolay. The project offers enough to hold hungry fans over, as the group is hard at work on their next effort, Love In Flying Colors, with Zo’s anticipated ManMade slated to drop in the coming months.

The always candid Phonte and his lesser heard partner in crime, Nicolay recently spoke with HipHopDX, reflecting on how far they have come together, relishing their present moment and leaving the future up in the air. Though their music’s consistency speaks greater volumes than any words can, this chat offered insight regarding the always-brewing creativity involved in their operation.

The Foreign Exchange On Their Latest Project The Reworks

HipHopDX: Tell me about the making of The Reworks and what inspired you to make a project of remixes.

Phonte: For us, being big fans of house and early ‘90s R&B—when cats would put out remixes and different alternate versions of songs—we wanted to bring back the days when a remix was really something different and not just somebody putting a different person over the same beat. In Hip Hop it’ll be so and so’s remix featuring 12 niggas [laughs]. We wanted to bring back that era where cats would take songs and reconstruct them into something totally new. That was the inspiration for it. Our catalog was pretty deep, and we had a lot of material to draw from. So we just decided to go in and let some of our favorite producers have at it.

DX: Were these songs created from acapella tracks, or did you recreate some of them from scratch?

Nicolay: They’re all done using original vocal tracks of the songs. Outside of the three new studio tracks, all of the remixes were done from previously existing tracks.

DX: Would you say it was more challenging putting together the remixes than coming up with the original compositions?

Phonte: Yeah [laughs]. It’s more challenging doing a remix project, because you’re at the mercy of other people with 10 or 12 different schedules. That can be kind of challenging, and remixes in general are a lot harder than original material because you have to re-imagine it. If you’re a producer and somebody told you to remix “My Girl” by The Temptations, it’s something you’ve heard a million times, and you have to go in and create something new. So remixes in general are tough to do, but everyone we got involved with the project [were people we trusted].

DX: Were these recorded during the makings of the various albums the original songs were on? If not, how long did it take to put this project together?

Nicolay: Some of them were recorded previously, but the bulk of the remixes were all new. A lot of them were done between the last quarter of 2012 and now. At the end of the day, everything came together relatively quickly, but most of the new remixes were done late last year.

DX: With Zo’s Just Visiting series, he did remakes featuring the Foreign Exchange family. If you could remix or remake any song you haven’t touched yet, what would they be?

Phonte: Honestly, I’m kind of done remaking songs. There’s a lot of stuff I really dig and get into, but in terms of doing covers I think [Mark Morrison’s] “Return Of The Mack” might have been my last one [laughs]. I don’t think I can pump up the world any more.

Nicolay: I’m the type of cat where if I remix anything, I’d like it to be something that is off the beaten path. For instance, on The Reworks there is a remix I did for a RJD2 track [“Games You Can Win”] that features Kenna, which is just a different kind of flavor. So any sort of work that I do in terms of remixes, I always like it to be something that’s not obvious. I do a lot of remixes and I’m always open to them.

DX: Are the new songs such as “So What If It Is” and “Don’t Let It Be So” indicative of the direction the group is headed musically?

Phonte: Maybe. We’re only a few songs into the new album. I can’t really say, I definitely think that “So What If It Is” going into the soulful house realm is something we always wanted to do. People really like the song and have taken to it really well, so that may be a lane we explore further going into the new album Love In Flying Colors. But right now we’re just working it out.

DX: You two have worked together for just about a decade now, who have been your favorite people to collaborate with outside of each other?

Nicolay: I would definitely include Sy Smith on my list as well. She’s incredible—a joy to work with and very much on the same page as we are. I prefer to just work with people from the immediate circle at this point, because we have been through a lot together. We know where we are together, and we can communicate with each other without speaking. The inner circle of the FE Music family is where I’m most comfortable working right now.

DX: What does the Foreign Exchange Music Group have planned for the immediate future after The Reworks? I’ve seen that you’re excited about Zo’s forthcoming release ManMade. Tell me a bit about what’s coming down the line.

Phonte: Next we have Zo’s record ManMade, which will be out in the spring, and that’s one I’m very proud of. I kind of played a Quincy Jones type of producer role on this album. Me and him produced it together in the same way we did the Just Visiting series. I’m just really proud of it, and I cant wait for people to hear it. I said on Twitter that it made [Zo’s last album] SunStorm sound like amateur hour [laughs], and it really does. We also have our fourth album—The Foreign Exchange—Love In Flying Colors, that will be in the fall. After that, I don’t know…maybe another solo record from me, maybe another City Lights project from Nicolay. We just get through every project, then we see where we’re at and what I feel creative in.

DX: In the near decade since working together, if you could pick one Foreign Exchange project you’re most proud of or one that was the most fulfilling for you, which would that be?

Nicolay: It’s a cliche but I’m proud of everything for very different reasons. I’m proud of Connected because it was the first album that sparked it all. With Leave It All Behind, we made a statement and went in a different direction. I’m proud of Authenticity because musically and compositionally, I feel that’s out strongest work yet. I’m also very proud of the newest material we’ve created. For me it would be impossible to pinpoint [something in particular].

Phonte: For me, my proudest moment as a writer is probably Authenticity. People might trip, but that was probably my most honest moment on any record I’ve ever done. It was written at a time when I was really depressed and going through a lot of turmoil. When I was writing it, I wasn’t even thinking about it. Then when I went back and heard the lyrics, [and] it was like, “Oh shit.” Authenticity and Charity Starts At Home are very much bookends on a chapter closing in my life, and I’m looking forward to the new stuff. The color is back [laughs]. As a writer that’s something I was really proud of [though it came from a painful place].

DX: Phonte, you’ve found yourself pestered by fans asking about you getting back to rapping. To close, do you want to make a statement about that?

Phonte: I just do it when I feel like it [laughs]. I do it when I have something to say. I guess in modern day Hip Hop, people are just used to getting material all of the time, and there’s nothing wrong with that. But I’ve never been a cat to just rap for the sake of rapping or sing for the sake of singing. I only create when I have something to say on that front. While I put out Charity Starts At Home a year and some change ago—which is five years ago in Hip Hop years—that pretty much got all my rapping out for a good time. I said a lot. I got everything out of my system that I wanted to say on the Hip Hop front with that record.