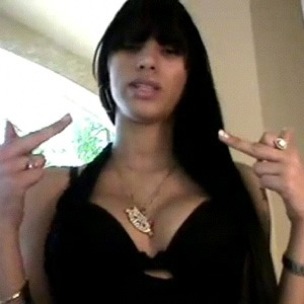 Some of us might wish we could “fuck every girl in the world,” but the consequences may be easily disregarded. Although the burden of proof appears to be strictly in social networking sites and text messages, Kat Stacks certainly is a woman scorned. Perhaps an entertainment escort, the Florida-based woman who says she entered adult relationships “for money and connections” did not feel properly respected. Through a website, video entries, Twitter and the first wave of interviews, she’s speaking up and airing out.

Monday evening, HipHopDX spoke to the woman who claims intimate relations with the likes of Bow Wow, Aaron Carter and numerous artists within Young Money Records – including Lil Wayne, Jae Millz and Lil Twist. With neither shyness nor shame Stacks explains her motives, and offers an opinion on why the entertainment industry’s projection of both easy love and easy money are perhaps huge myths. Ayo technology, is anything kept private these days?

HipHopDX: Who is Kat Stacks?
Kat Stacks: Well Kat Stacks is the one who is exposing all these fakes-ass motherfuckin’ rappers out here. It’s time to taint their image and shit. They calling Child Services on me and shit.

DX: So what’s your whole beef with Young Money?
Kat Stacks: Young Money is a bunch of motherfucking roommates. They call themselves Young Money, because they don’t got no grown-ass money. They ain’t got shit, them motherfuckers is all roommates – they just fronting for their image. All they do is treat bitches wrong and I ain’t the only one. I’m the only one out here brave enough to speak out on those motherfuckers. I’m just a spokesman for what they are and you can see on my website how I have proof of it.

DX: Is it true that you had sex with all of them, if you don’t mind answering that question?
Kat Stacks: Yes!

DX: Did you like any of them? As far as having sex with them… what made you do that?
Kat Stacks: The only one that paid out of all of them was Jae Millz. He paid for himself, and he paid for Gudda Gudda. He also paid for me to bring other girls over, but Lil Twist he never paid. He left me standing [in] downtown [Miami]. It’s just time to expose them, because I’m sick of their shit. [Laughs]

DX: You just said Jae Millz himself and his crew paid to have sex with you. How much did they pay?
Kat Stacks: The first time I met Millz was through this other square bitch, because she didn’t know what the fuck she was doing with him. I snatched his number from her phone and we started talking. I told him it was $650 for each hour, so he was like, “Oh, let me see you in person.” We met up and he let me up to his crib. He paid for like seven hours the first time I met him. After that, about three weeks later he called me up again in Miami to bring some more girls over. I brought two girls over and he paid for them too. Gudda Gudda was there too.

DX: So hold up, you just said Jae Millz paid seven hours worth. How much you charge again, so I can get this clear?
Kat Stacks: 650.

DX: Not to be to nosy, but what comes with that 650?
Kat Stacks: You get to come just one time. [Laughs]

DX: None of them tried to hit it raw, did they?
Kat Stacks: Nah, they all use condoms.

DX: Where was the initial stand, like “I’m tired of being treated like this, so now I’ma put y’all on blast”?
Kat Stacks: Because [one] night I got left and was stranded downtown. I had to call people I used to go to school with to come pick me up. The cab was like over 100 dollars. I was pissed off. I was really mad that night and Lil Twist left me stranded. I started talking shit on Twitter and everybody was [stopped talking to me]. Jae Millz, the next day, started texting me bullshit [like] “Take care of your child, you bitch,” and all that shit. So I was like, “Alright, I’ma just expose this nigga, if he want act stupid and cut me off.”

DX: They have the hit-single on the radio “Bedrock,” but you have said they don’t make your bed rock. You said they make your bunkbed rock. Can you talk about that?
Kat Stacks: [Laughs] The first time I went to Jae Millz’ house I was expecting like a nice home on top of shit, like Bow Wow‘s condo or Lil Wayne’s crib and shit. No! The fucking crib is smaller then mine’s – a dirty-ass carpet and little tiny-ass bed. Their all fuckin roommates and Mack Maine stays there too. [Laughs] What the fuck? Y’all talk “money” this and that, but y’all living lower than me.

DX: What did you mean when you said Lil Wayne was “pimpin'” them. What’s going on with that?
Kat Stacks: I’ve been to Wayne’s crib with other bitches and we had sex and shit. Lil Wayne got a raw-ass motherfucking condo. His shit, it’s like he’s the only one that lives there, those other motherfuckers [are] all roommates. Wayne is pimping all of them.

DX: So basically you saying Young Money has no money. Wayne and Birdman have all the money?
Kat Stacks: I don’t know about Birdman. I’ve never fucked with him before.

DX: Well what kind of cars they drive?
Kat Stacks: I haven’t been outside of my crib with them.

DX: Well what’s your whole beef with Lil Twist when you said he’s really not 18 years old…
Kat Stacks: Yeah! The first time I fucked with Lil Twist was on Twitter. I was like, “Oh, you tryin’ catch me on some fucked up rape charges.” He looks like he’s fucking 12 years old, and he’s like “No, I’m not.” When we met up I was like, “Show me your ID to prove to me you’re 18.” He showed me his identification so I went along with it. That’s just for his image and fanbase, that’s what makes him money.

DX: What about Bow Wow, what’s your situation with him?
Kat Stacks: When I first met Bow Wow, it was last December. I met him on Twitter. He lives like two minutes away from me and I couldn’t have sex the first time I met up with him, so I just gave him head. We had problems, because he was messing with [a woman named] Haley who I was talking about on my website. He was fucking with these other bitches, Kandy and Honey. One of the bitches told me she got genital warts and shit. I started beefing with Bow Wow like, “You fucking that bitch and you fucking me too.” We was fuckin’ with condoms on, but still. We started beefing over that.

DX: How you feel about the people that say you’re lying and doing this for attention?
Kat Stacks: I got proof. I got his number, direct messages, everything. So people can’t call me a fuckin’ liar.

DX: How you feel when people say you’re the “2010 Superhead”?
Kat Stacks: They haven’t really heard all my stories. They’ll hear about them soon.

DX: What about when other females judge you saying about the way you carry yourself and for you being with so many men?
Kat Stacks: If I really gave a fuck what a bitch thought about me, I would’ve never exposed no one like this. This shit is getting me motherfuckin’ money, I’m going out on top. I don’t give a fuck what a bitch gotta say! The same bitch talking shit is the same bitch trying to get a reply from these motherfuckers on Twitter. [Laughs]

DX: I have to ask you this, Kat Stacks, would you say you’re in the business of professional prostitution?
Kat Stacks: Um, no comment.

DX: So how did you even get in contact with these rappers. As a child growing up, were you always attracted to rappers and men of high status?
Kat Stacks: Well, I was working as a stripper at a strip club called Tootsie’s. I used to work over there and that’s where I met some of them, the rest on Twitter or [through] some other bitches.

DX: Well how did you get them to hit you back on Twitter when they have so many followers?
Kat Stacks: They find me somehow. [Laughs]

DX: So are you just one of those girls that’s at every show, video shoot, and they want to take you backstage, because they think you look good?
Kat Stacks: Something like that.

DX: At the end of the day, what do you think you’re accomplishing with all of this?
Kat Stacks: Being on top. [Laughs]

DX: But how are you ending up on top? What do you get out of this, as some people will think the rappers still won?
Kat Stacks: People might look at it like they won, but I’m not gonna be just another hoe they fucked. I’ma be another hoe that got fuckin’ paid. I’m going on top right now.

DX: Are you done with what you’re doing with these rappers?
Kat Stacks: Some still hit me up. As long as they got money, it’s all good. [Laughs]

DX: Have your prices went up?
Kat Stacks: Yep!

DX: How much?
Kat Stacks: Way up. I’m not gonna put it out there.

DX: So let me ask – after all of this, do you like having sex?
Kat Stacks: It was just for money and connections.

DX: What type of connections?
Kat Stacks: I got a lot of connections now, through Jae Millz, because he brought me around everybody.

DX: But I’m asking what you’re going to use those connections for…
Kat Stacks: Oh, you’ll see soon.

DX: Do you have a final message to the groupies/young women that mess with these rappers and get disrespected?
Kat Stacks: All they do is talk shit, get passed around, and treated like shit. Most of these urban video models get treated like this. I’ve witnessed it in front of my face, but they’re not brave enough to speak out. They’re messing with the wrong bitch now. I’ma put it all out there – everybody out there talking shit, I’ma expose all of y’all. Y’all can’t shut me down. Y’all can’t hack my Twitter, I’m never gonna shut mouth.