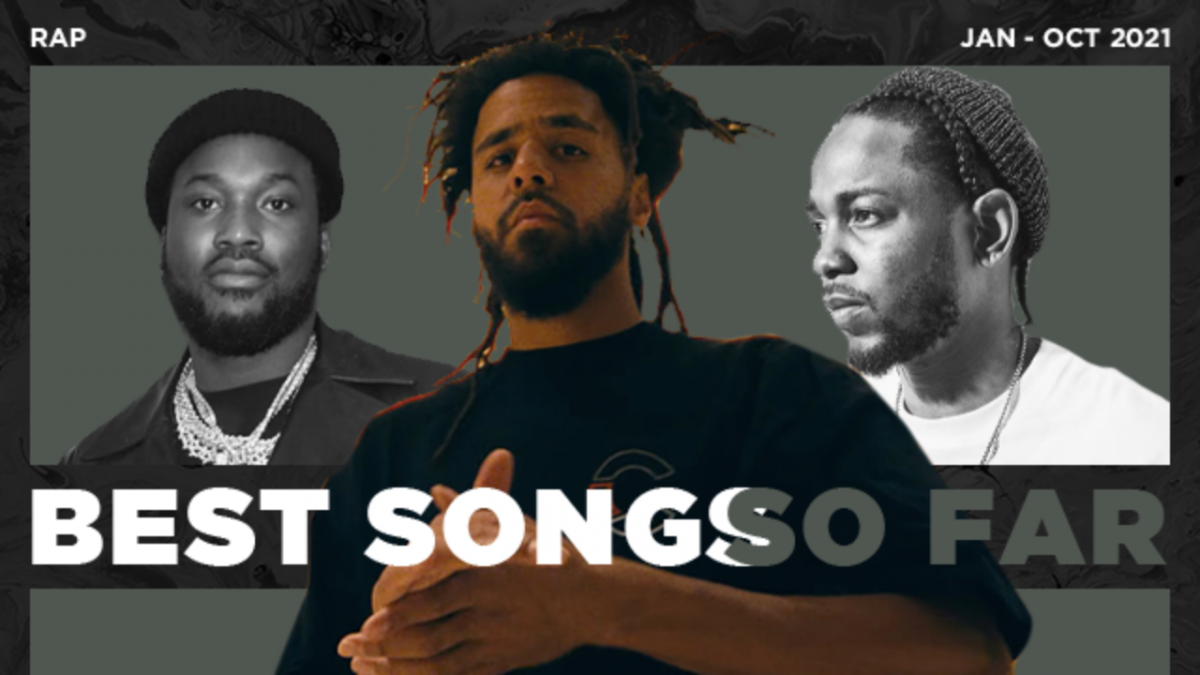 As 2021 comes to a close, there are a lot of standout rap moments from the past 365 days to look back on. Even though the world was still dealing with a lack of concerts for much of the year, there was no shortage of bars for fans to dissect. Some of the game’s biggest stars like Andre 3000, Nicki Minaj, Kendrick Lamar and Lauryn Hill dropped new verses for the first time in a while, reminding us why they’re considered top tier lyricists. There were also some unique collaborations like Tyler, the Creator featuring NBA Youngboy and RZA with Flatbush Zombies. By the end of the year, fans were able to experience music as the soundtrack to their daily lives outside once again, and these songs served as the backdrop. Here are HipHopDX’s Best Rap Songs of 2021.

The unlikely collaboration is the second single off Tyler, the Creator’s excellent Call Me If You Get Lost. The production is soulful and cinematic, with Tyler impressively rapping through the fantasies he has for a crush. YoungBoy provides the softer vocal performance of the two, singing about love and the things that suck about it. – Anthony Malone Baby Keem and Kendrick Lamar’s movements prior to “Family Ties” were shrouded in mystery. Then “Family Ties” finally arrived as the lead single off Keem’s debut album, The Melodic Blue, helping to quell fans’ thirst. Kendrick and Keem’s chemistry couldn’t be closer if they were conjoined by the hip. Keem’s laidback, weird, off-kilter delivery makes way for Kendrick to open his horizons and experiment. K Dot opens his verse with, “smoking on your top fives tonight” with the cadence of an alien taunting his rivals. Then he gives us a reminder, bar for bar, why he’s one of the greatest to touch a mic. – Anthony Malone Andre 3000 is rap’s white whale, ever sought and rarely sighted. When he does grace us with a verse, it is invariably awe inspiring. In his most philosophically dense verse of the last decade, 3 Stacks pleads with the deceased Miss Donda to ask his own passed parents questions that have troubled him for quite some time. It’s a heartbreaking rumination on life, death, the passage of time and if indeed there is an afterlife. Andre handles all the topics with grace and wit as fans would expect, yet somehow exceeds expectations. He begins by wondering why, if there is a heaven, his mother wouldn’t be allowed to talk to him. He delves into his family history, creating 3-dimensional scenes with flippant ease, and then asks Miss Donda why his parents were never married, using his aged wisdom to reason into their lives, seeing his parents for the imperfect young people they were. Maturity and brilliance radiate from every line, and the poetic nature of the verse leaves its sentiment ringing in the listener’s ears long after the track comes to a close. Kanye does a solid job as well, but it’s 3 Stacks beautiful verse that carries the track. It’s easily one of the best hip hop songs this year. – Ben Brutocao Every time J. Cole drops, the internet implodes. Cole’s popularity, skill, and love for Hip Hop are undeniable. On The Off Season, the follow up to 2018’s KOD, Cole seeks to prove the haters and naysayers wrong. His raps are sharp, as if he were sharpening his rhymes in a shed for the past three years. On “My Life” he enlists 21 Savage, and Morray to confront their personal demons. While 21 and Cole impress with their verses, Morray’s hook steals the show, warbling with messages of empowerment and hope. – Anthony Malone Social media entered a frenzy when people noticed Lauryn Hill was featured on the tracklist to Nas’ King’s Disease II. Ms. Hill’s return to rhyming was met with excitement and a healthy dose of uncertainty as nearly 25 years have passed since the two bards of Hip Hop first joined forces on It Was Written‘s lead single “If I Ruled The World.” Luckily, both legendary MCs have plenty of fuel left in the tank. Nas’ head-nodding flow on “Nobody” exhibits the same dexterous flow he forged in his youth, but it’s Ms. Hill’s explosive verse that truly steals the show. The track is one of the best hip hop songs this year because it satisfies every audience, young and old.  – Dana Scott

Exodus, the first posthumous DMX album, arrived in the final days of May with an epic range of features. But “Bath Salts” quickly stood out as the defining track. Featuring JAY-Z and Nas on the same track, a feat which a decade ago would have felt impossible, “Bath Salts” is arguably one of the most important tracks of all of 2021. In this gathering of New York rap royalty, three kings of the East Coast come together for the final time. Rest in peace to the guardian of Yonkers, Dark Man X. – David Brake

The triumphant brass kicking off “What It Feels Like” sounds like a coronation of the late great Nipsey Hussle’s spirited vocals. He runs another victory lap in the Hip Hop community’s collective heart as his “marathon continues.” The collaborative single featuring JAY-Z has an uplifting, black fist-in-the-air energy which serves as the perfect match for urban cinema’s most powerful film of the new decade, Judas and The Black Messiah. It’s one of the best hip hop songs from a movie soundtrack since Black Panther. – Dana Scott

On his self-titled album, Vince Staples is self-reflective, reading his thoughts like pages off his memoir (if he had one). On “Take Me Home,” Staples runs away from his demons and the aching past that haunts him at night. He finds solace in the streets, a place dually harmful and comforting. He’s assisted by Fousheé, who takes hold of the chorus with enchanting vocals. On the outro, she poses the question for Staples: who’s a friend and enemy? Kenny Beats provides subtle guitar strings that work as a melancholic backdrop for Staples, but when he lays the third verse, the song becomes drenched in paranoia and suspicion. – Anthony Malone

Alchemist and North Carolina rapper MAVI sound like they were made for each other. Spitting through the swirling textures of Alchemist’s soulful production, MAVI raps with a sense of glory and pride, his bars splintering into topics including metaphysics, the state of the nation and the success he’s experienced over the past few years. Deeply impassioned, “Miracle Baby” is not only the best track from This Thing Of Ours 2, it’s one of MAVI’s finest offerings of the year. – Ben Brutocao

Each Earl Sweatshirt track is a gift that keeps giving. With each listen, his music expands and contracts, sharing textures, lyrics and notes unheard on the first play. “2010,” the former Odd Future rapper’s most recent track, is another excellent addition to his canon, containing heady bars layered between clever references, all over a wonderfully discordant beat from Black Noi$e. – David Brake

Kanye West‘s DONDA was met with mixed reception, but none can deny the intoxicating energy of “Off The Grid.” Including vintage Yeezus-esque production and some of Ye’s best bars of the album, “Off The Grid” also features arguably the greatest verse in Fivio Foreign’s career and punchy bars from Playboi Carti. Kanye, who also executive produced Carti’s WHOLE LOTTA RED, clearly holds a lot of respect for the Atlanta rapper, as “Off The Grid” sounds like Yeezy’s take on Carti’s frenetic post-SoundCloud sonics. – David Brake

After a hiatus that only rivals his TDE boss Kendrick Lamar, Isaiah Rashad returned from a long soul search this May with brand new music in the form of “Lay Wit Ya.” Rashad’s battles with mental health and addiction have unfolded publicly, and he’s been transparent about the effects his struggles have had on his music. To the delight of his cult-like following of fans, the Cilvia Demo rapper seems to be in a healthier place. The menacing and rhythmic production from Hollywood Cole serves as a springboard for Rashad and his Memphis counterpart, Duke Deuce, as the two bounce across the song, rapping about women and big wheeled Chevys. It’s one of the best hip hop songs this year from the south. – David Brake

Nicki Minaj released the Young Money reunion posse cut on the re-release of her pivotal mixtape, Beam Me Up Scotty. “Seeing Green” brings Nicki, Lil Wayne, and Drake back together to a time when Young Money ruled the charts. The soulful Heather Headly sample provides the tone for the track — celebratory, triumphant, and powerful. Each artist raps like it’s their last verses with invigorating wit and charisma. From Weezy’s looped Atlanta bars, Nicki’s ferocity in her pen, and Drake’s slam dunk of a verse—“Seeing Green” doesn’t play on nostalgia; it’s a display of veterans teaching game to the new school. – Anthony Malone