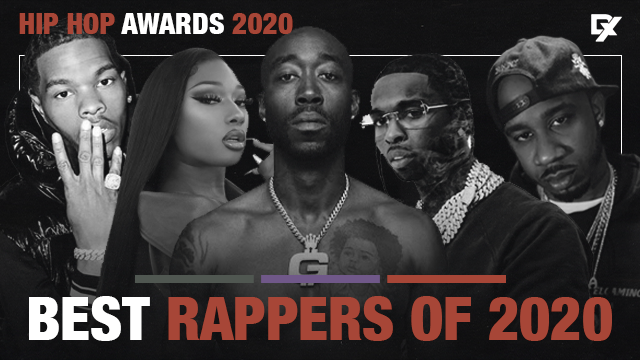 Bars were alive and well in 2020 — whether they came from incarcerated rappers or even alien rappers. Over rapid trap hi-hats and inventive production, artists such as Lil Baby and Megan Thee Stallion dominated the charts with top rap songs and earned their place at the forefront of rap’s future at every turn. Elsewhere, veterans such as Freddie Gibbs and Benny The Butcher let fans know their pen continues to improve, producing some of the best rap songs of their career as they took their turn in the spotlight.

No matter which side of Hip Hop is preferred, the 2020 best rappers conversation uncovered these wordsmiths and gave fans lyrics to stick to their ribs and ruin their bib at the same time.

The Double Platinum Rapper Hit The Grand Slam This Year

Lil Baby said it was his turn and we believed him. The Atlanta king delivered one of the most well received efforts of the year in My Turn, filled to the brim with hits upon hits. Whether it was the 42 Dugg-assisted “We Paid” or the anthemic “Heatin Up,” Lil Baby stayed in rotation and made sure his presence was felt. And of course, that’s not even mentioning “The Bigger Picture,” one of the most important songs of the year to come at such a pivotal time.

Some of Our Favorite Hip Hop Artists This Year

Read on for HipHopDX’s breakdown of the best rappers of 2020 and why these five stood above the rest this year.

Benny The Butcher Reached New Heights On ‘Burden Of Proof’ Benny The Butcher said 2020 was about expanding — and he did just that. After carving out one of rap’s most loyal fanbases along with Griselda, The Butcher got with Producer of the Year candidate Hit-Boy for Burden Of Proof, telling the truth about street life in each abrasive bar. Look no further than “Over The Limit” to see Benny and Hit-Boy at their best, bringing adrenaline-pumping bars and beats on a track that just might make fans press the gas pedal a little closer to the floor.

Freddie Gibbs Delivered An Album Of The Year Contender With ‘Alfredo’ Freddie Gibbs was everywhere in 2020. The veteran spitter shined on his own Alfredo, next to his talented peers such as Westside Gunn and Boldy James on their respective albums, and even ventured into experimental R&B on Tom Misch and Yussef Dayes’ “Nightrider.” It’s hard to name just one reason why Gibbs earned a spot on DX’s Rapper of the Year list, but his versatility and unavoidable presence unparalleled.

All Eyes Were On Megan Thee Stallion In 2020 2020 was the year of Megan Thee Stallion. H-Town’s finest was on two of the biggest songs of the year, floating on “WAP” with Cardi B and earning her first-ever No. 1 record on the Billboard Hot 100 with “Savage.” She’s proved she can hold her own next to Beyoncé and followed up the success of Suga by selling over 100,000 copies of Good News in its opening week. Megan delivered some of the hardest hitting bars TikTok has ever seen and she’s been rewarded with a banner year that gives her plenty of momentum heading into 2021.

Pop Smoke Validated His Star Power With ‘Shoot For The Stars, Aim For The Moon’ Pop Smoke’s name still rings across the world and for good reason. As one of drill music’s most formidable voices, 2020 saw the Brooklyn rapper expand his range with massive records such as “The Woo,” one of the most unique hits of the year that pulled together something for everyone across the corners of the sonic map. On “Mood Swings,” he hit soothing melodies next to Lil Tjay on a song that’s found viral success. Elsewhere on “Shake The Room,” he went back to his roots for a stadium-shaking smash that showed his undeniable chemistry with Atlanta’s own Quavo.

Westside Gunn kicked off his 2020 with the terrific Pray For Paris, only to follow it up less than three months later with Flygod is an Awesome God 2. Still not done, he came back with even more bars on Who Made The Sunshine? and enlisted his own daughter WS Pootie to draw the album cover.

Black Thought has proved his worth on the mic 10 times over, but he’s still coming back for more. This year, he dropped off Streams Of Thought, Vol. 3: Cane & Able and popped up on projects from Eminem, Public Enemy and Westside Gunn.

Look no further than the intro track on The Allegory to see why Royce Da 5’9 earned an honorable mention. The explosive MC lets his fans know how he’s coming right off the bat, with clever wordplay and crafty metaphors.

Conway The Machine lived up to his name in 2020, dropping three projects on his own and appearing on almost too many songs to name.