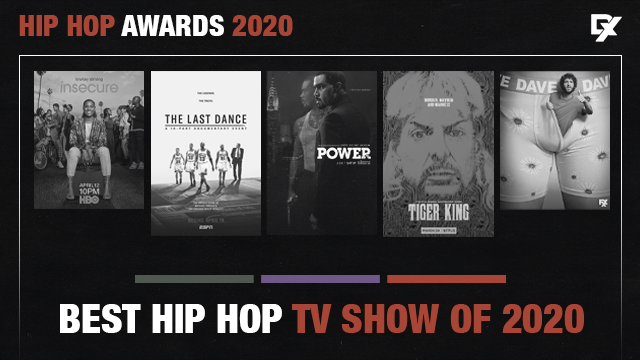 With 2020 bringing the globe inside to quarantine amid the coronavirus pandemic, television shows and streaming services came in clutch, making the conversation for the 2020 best TV shows more lively. Whether it was the best TV shows on Netflix or the best streaming shows through premium channels (50 Cent’s Power wrapped up its first chapter with Ghost’s fate being determined), it was another memorable year when it came to the best TV shows 2020. Before you start commenting, “why the hell is Tiger King” on this list, think about how many times the show was referenced in rap lyrics and by rappers on social media. Cardi B even tried to get Joe Exotic released from prison!

The HBO comedy-drama wrapped another successful season in May with Issa Rae and Yvonne Orji navigating the hurdles thrown in their direction once again. Insecure cruised to an Outstanding Comedy Series nomination in 2020 but were beat out by the POP TV smash Schitt’s Creek.

Some of Our Favorite Shows Within Hip Hop Culture

Lil Dicky’s Dave was a breath of fresh air on the 2020 television circuit. The FXX/Hulu series examines Dicky’s semi-autobiographical life story. The show takes a YouTube rapper’s unlikely rise to fame but combines elements of romance, friendship and dealing with mental health issues to tug at the viewer’s heartstrings in a compelling first season.

More than 20 years later, ESPN unsealed the never-before-seen footage documenting Michael Jordan’s final season with the Chicago Bulls. The gripping 10-part docu-series couldn’t have arrived at a better time, with much of the country in a spring quarantine. Each episode averaged well over six million viewers per episode and even saw MJ jamming out to some Kenny Lattimore.

50 Cent’s enthralling Power series culminated in 2020 with fans finally finding out Ghost’s fate in the end of Season 6. With the strong viewership throughout the STARZ series, multiple spin-offs have been ordered. The first, Power Book II: Ghost, debuted to rave reviews in September.

Tiger King’s roar grew louder and louder at the onset of quarantine and the Netflix series was inescapable in the social media stratosphere. America became encapsulated with the juicy stories of Joe Exotic and Carole Baskin to the point a movie based on the show is now in the works. Fans even dressed up as the pop culture fixtures on Halloween months later. While the show wasn’t a Hip Hop-inspired series, through lyrical references and social media moments, it became engrained within the culture.

Mixing sci-fi, horror and historical non-fiction, Lovecraft Country was one of the most unique shows of 2020.

I MAY DESTROY YOU

Two decades after her mother starred in a film of the same name, Zoey Kravitz gave new life to High Fidelity. Although the Hulu show was canceled after just one season, Zoey’s performance will leave a long lasting impact on fans.

Filled with heroes, villains, explosions and shocking twists and turns, The Boys quickly became one of the most exciting shows on streaming. It even made Barack Obama’s list of favorites.