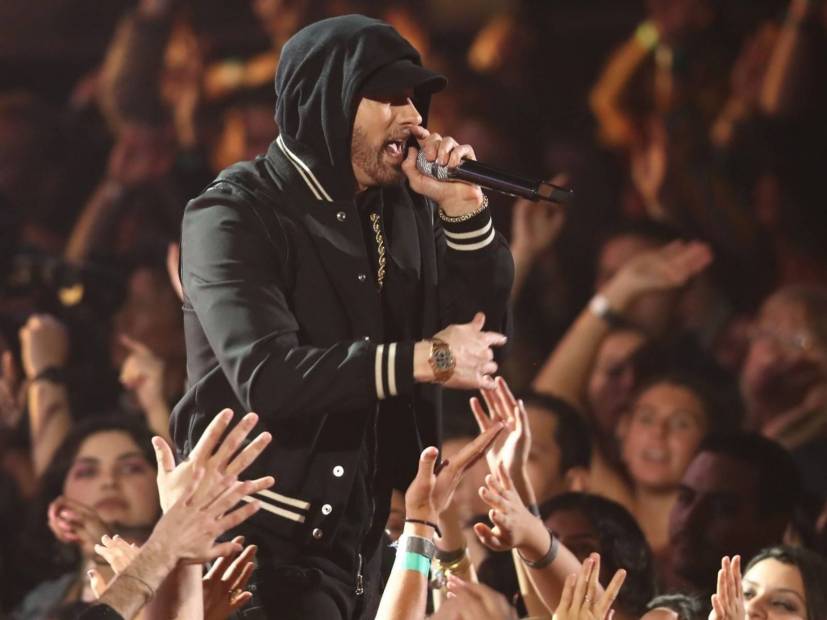 Everybody in the streets and in the tweets might be too pre-occupied with Eminem vs. Nick Cannon right now to focus on anything else Slim Shady related. However, as the decade comes to an end it’s important to appreciate the best this crazy genre’s legends have given the fans. Not only has Em made a career of rapping his proverbial white ass off on his own tracks but the works of others as well.

From CD stores to preferred streaming services, seeing Eminem’s name pop up as a featured guest on a favorite artist’s album was enough to get even the most casual Hip Hop fan to jump for joy. He has never been one of those artists to simply phone-in a feature verse in attempts to secure an easy bag – in fact it could be argued that Em comes harder on his best guest verses than on the majority of his solo work (but that’s another article altogether).

Check out our list on Eminem’s 10 best guest verses and let us know in the comments which ones we missed!

Upon the release of The Good Doctor’s 2001 album, Eminem was steadily building buzz, notoriety and credibility in the Hip Hop space. His abrasive verse on “What’s The Difference” where he professes his love for Dre and hatred for his baby mama (again) managed to check all three boxes with his mean 16.

Despite the recent criticism surrounding Nicki Minaj’s legacy, there is no denying she has made some standout rap cuts and “Roman’s Revenge” is no exception. Her alter ego Roman Zolanski pops out for a crazily claustrophobic lyrical tirade while Em channels his Slim Shady persona for two snarling verses about dungeon dragons. Every gruesome aspect of Em’s lyrical Rolodex one could imagine comes eerily to life on this track.

“I’ll Hurt You” is a picture-perfect canvas for Eminem to flex his lyrical dexterity. A rapid-fire violin beat courtesy of Scott Storch with a leadoff hit from Busta Rhymes would have had Em rabidly foaming at the mouth to get off a 16. Said 16-bar verse is executed to a tee as Em follows every single violin strum with a cascading rhyme about causing riots in the club with the Shady squad.

Sure, Lil Wayne’s 2010 rock album Rebirth was noticeably weak. However, a sliver of saving grace comes from Em’s acoustic verse on “Drop the World.” Em uses a variety of different voices to match the variations in the beat. For the acoustic portion, he employs his mildly harmonized voice that is usually the calm before the rap storm. As the drums and bass kick back, Em then goes nuclear and raps with classic Slim Shady vigor.

Before Xzibit was pimping rides, he was putting out above average rap music – even tracks tight enough that they warranted a feature from Slim Shady. “Don’t Approach Me” was a standout track from X’s Restless album that dealt with the fine art of avoiding unnecessary conflicts in the rap game. Em raps about all the drama he finds himself wrapped up in (some his own doing and some unsolicited) and what he’d willing to do to rid himself of pestering people. Whether it be “a parking lot dude,” Kim or the music business as a whole, Em is flagrantly chucking his middle fingers.

50 Cent’s debut Get Rich or Die Tryin’ was chock-full of memorable Hip Hop moments and amongst them was Eminem’s verse on “Patiently Waiting.” It serves as, not necessarily as a torch-passing, but a serious Shady stamp of approval. What’s more intimidating than bars about spraying Uzis is when he describes the impact the Shady/Aftermath/G-Unit crew is about to have on the aught’s Hip Hop landscape: “Take some Big and some Pac and you mix ’em up in a pot/Sprinkle a little Big L on top, what the fuck do you got?/You got the realest and illest killers tied up in a knot/The juggernauts of this rap shit, like it or not.”

Eminem had a lot of grizzly and gruesome verses but the crude crown jewel is his verse on Biggie’s “Dead Wrong.” The track appeared on Biggie’s first posthumous compilation album, Born Again, and doesn’t pull a single punch. The themes of menace and murder are felt down to the bone as Em raps “I just beat you to death/With weapons that eat through the flesh/And I never eat you unless the fuckin’ meat looks fresh.”

“Forgot About Dre” remains one of the most recognizable songs in the modern Hip Hop zeitgeist. Those iconic strings and the wah guitar plucks make it such a familiar beat to damn near everyone who has been to a party, club, wedding or literally any other place where popular music is played. Dre sets up the song with a very basic yet very Dre-esque verse while Eminem turns it completely on its head and brings listeners into one of his crazy fever-dream scenarios; filled with awkward eyes, barking dogs, a burnt-down house and a set of twin babies in a Mercedes-Benz.

Em performs best when he’s rapping over grimy, downright dirty beats alongside his Shady/Aftermath cohorts and Obie Trice’s “We All Die One Day” is the perfect canvas for Slim to get as dark as a cold Detroit night. Alongside 50 Cent, Tony Yayo, Lloyd Banks and Obie, Em mixes jokes, threats and mind-melting multi-syllabic rhymes to compliment the menacing posse cut. He even gets a good a shot in at Mariah Carey as he raps “I’m a psycho, Mariah ain’t got shit on me” but the best bars are easily “Shady Records, you better believe the hype is real/This is no joke, I don’t smoke/But I toke enough secondhand to make my fucking P.O. choke.”

One of the oldest and most highly debated conversations in Hip Hop is whether or not Eminem bodied JAY-Z on “Renegade.” The track appeared on Jigga’s classic The Blueprint album which not only featured Eminem but was produced by him as well. While Nas’ “Ether” claims that Jay did in fact get “murdered on his own shit” by Slim Shady, there is a case to make for both MCs having the better performance. However, Eminem does thoroughly rip his venomous verses with conviction and disdain for his critics. Em has made a career off being transparent and self-aware but lines like “But I’m debated, disputed, hated and viewed in America as a motherfuckin’ drug addict, like you didn’t experiment?” are downright mindful in the most sinister way. Both of Em’s verses on this track are not only textbook rapping but also a perfect summation of Em’s controversial career.