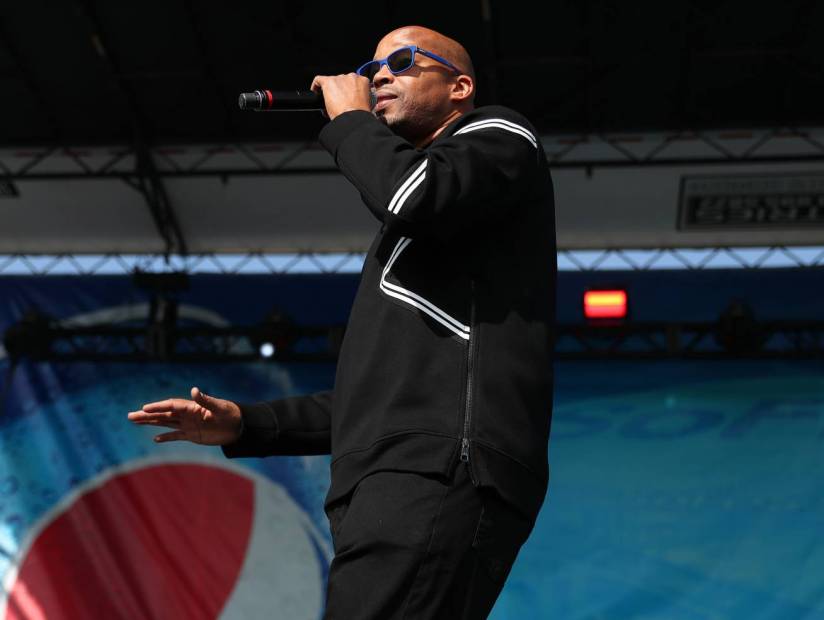 Taylor Swift will officially be the star headliner for SoFi Stadium’s grand opening next July, but that didn’t stop PepsiCo from procuring its own private concert for the future home of the Los Angeles Rams and Chargers.

With the stadium standing at 80 percent completion in the background in Inglewood, California, PepsiCo invited Hip Hop pioneer Warren G to put on a concert for the 3,000-plus construction workers who are responsible for bringing the 298-acre global sports and entertainment destination to life.

The stadium’s first-ever tailgate party featured a series of games, food and beverages and celebrated the announcement of PepsiCo extending its yearslong relations with the NFL and partnering with SoFi Stadium as its official soft drink and salty snack partner. The pact also further aligns PepsiCo with the NFL and its two home teams in Los Angeles.

Warren G was the main course Thursday afternoon, and the G-Funk maestro performed a 30-minute set with such hits as “This D.J.”, “Do You See”, “I Want It All” and “Summertime In The LBC” as construction workers in hard hats and orange vests took a lunch break to soak in the melodies.

The Long Beach-bred artist, now 48, then transitioned from his own hits and honored his lifelong friend and former 213 cohort Nate Dogg by singing along to some of the late artist’s all-time best hooks. The climactic moment led to Warren G transitioning into “Regulate,” the classic hit that the rapper is synonymous for. The construction workers crooned along, and some even brought out a two-step in their steel-toe boots. After his performance, Warren G posed with fans and signed their hard hats.

“It feels great to be a part of all of this and showing appreciation to the people that are behind the scenes building the stadium. I’m honored to be performing for them,” Warren G told HipHopDX in an interview. “This is pretty cool to get down with the people who’ve been down with me from day one.”

“We wanted to have an artist who represents Los Angeles as well as the fans that will eventually come to the games. Warren G is a staple in the Hip Hop community and a pioneer going back to the 90s,” said Sean King, VP and GM of PepsiCo’s western division. “It’s all about celebrating the men and women who are bringing this stadium to life for fans to enjoy in the near future.”

Although the event took place in the parking lot as cranes and a cavalcade of workers toiled away in the distance, it was a small appetizer for what’s to come in the future.

Jason Gannon, managing director at SoFi Stadium and Hollywood Park, said they’re actively working with several hip hop artists and have them perform in their opening series of events leading up to the NFL season in 2020.

“Sports are important to the project, but so is live entertainment,” said Gannon. “Concerts will be important to transform the stadium into a global destination that we’ll become.”

The arena will seat approximately 70,000 fans and be expandable to seat up to 100,000. One can only imagine fan favorites like Drake, Kanye West or a JAY-Z-Beyoncé duet would be on the shortlist to perform at the venue by next year. Country singer Kenny Chesney already is the holder to the mixed-use development’s second billing.

Pepsi, also the purveyor of the Super Bowl Halftime Show, will have a permanent stay in the 3.1 million-square-foot entertainment palace that also will boast an adjacent 6,000-seat performance venue by holding court at the Pepsi Zone, a 46,000-square-foot space where fans can experience food and entertainment.

Warren G, meanwhile, can be a candidate to return to SoFi Stadium as a performer in a larger capacity in the future as well. The west coast rapper still actively tours with lifelong friend and fellow 213 partner Snoop Dogg.

Whenever the curtains close on his musical career, Warren G can perhaps even visit the stadium as a fan to root for his son Olaijah Griffin, a five-star cornerback recruit who currently plays for USC and has playmaking skills and pedigree that could very likely land him in the NFL in the next couple of years.