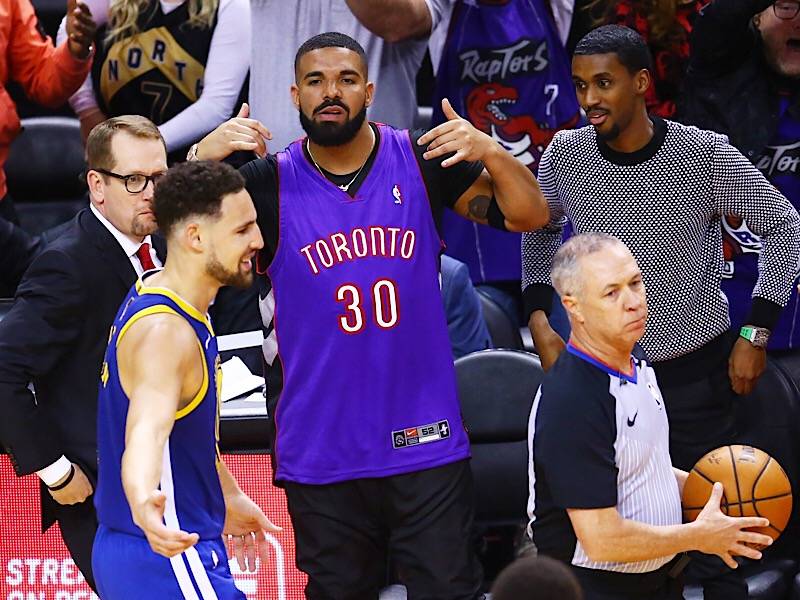 After the NBA channeled New Edition, telling the Toronto Raptors that their team ambassador—and hometown hero—Drake needs to “cool it now” with the sideline antics, it still appears Drizzy isn’t about to hang up his troll hat just yet.

Though he avoided inappropriately putting his hands on any coaches, he still managed to outdo himself during Thursday’s (May 30) Game 1 of the NBA finals against the Golden State Warriors with a multi-layered jab, a heated exchange, and post-game social media gold.

With Game 2 taking place Sunday (June 2), here’s a rundown of all of Drake’s Game 1 glory.

In many ways, Bay Area rap icon E-40 is the Warrior’s equivalent to Drake. Though not officially named as a team ambassador, he has been riding heavy for his team for years now. Warrior’s head coach Steve Kerr told ESPN that 40 Water was ready for [Drake] in response to some of the backlash Drizzy has garnered.

Understandably, the meeting of the super fans was anticipated, and after a friendly exchange before the game, E-40 and Drake posed for a mock choking picture, which 40 posted on his Instagram with the caption “Friendly competition.”

The first thing that many took note of yesterday was that Drake was rocking a Dell Curry jersey. The subtle genius of the subtle trolling is that the way you interpret it changes based on your knowledge of the game. Curry, father of Warrior’s point guard Stephen Curry, played his final three seasons in the NBA for the Toronto Raptors.

Bandwagon fans without any knowledge of the Virginia Sports Hall of Famer were simply left to marvel at the visible disrespect of the Warriors’ star player’s name on a Raptor’s jersey. However, it failed to knock Stephen Curry off his game, as he scored 34 points.

Drake had some kind words for Draymond Green after Game 1 of the NBA Finals “You’re Trash” ? #Nbafinals pic.twitter.com/z4RM0k7N3q

Drake is no stranger to heated exchanges with players — in fact he received a warning from the league after a war of words with Cleveland Cavaliers’ center Kendrick Perkins during the 2018 playoffs. Last night, after a brief back and forth with Warrior’s forward Draymond Green, the rapper can be seen exclaiming that he’s trash.

It’s not exactly clear what the two actually said to each other, however it was clear that Green had no intention of elaborating, shutting down one journalist post-game, clarifying that he didn’t consider that t be a scuffle, adding “Do you have a question about basketball?

Draymond Green was not feeling the Drake questions ? pic.twitter.com/PhGMpg3GXu

In one of the game’s weirder moments, Drake was seen chatting with Curry during a timeout, and awkwardly appearing to pick lint off of him. Though it had the potential to become an embarrassing gif, Drizzy managed to turn it into lemonade, humorously noting that he was selling the lint on eBay. The punchline? He took another shot at Green, noting that his username was “Draymondshouldntwear23,” a reference to the number once belonging to the great Michael Jordan.

The internet, of course, did its thing, with numerous Stephen Curry lint posts quickly flooding eBay.

With the defending champs down 0-1, there’s plenty to look forward to come Sunday, June 2 when Game 2 goes down in Toronto.