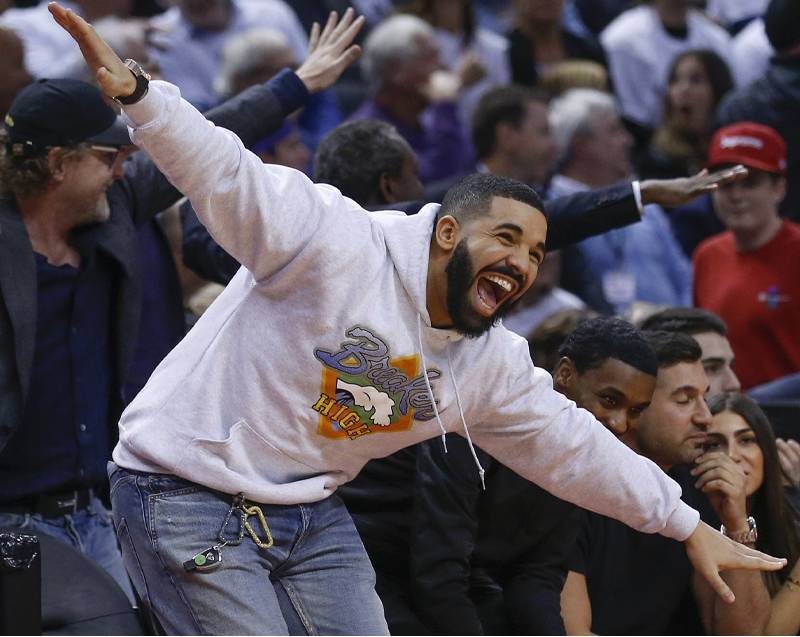 Toronto, ON – Subscriptions to the Drake curse club may see a dip after the Toronto Raptor’s exciting Game 5 win over the Philadelphia 76ers in the 2019 Eastern Conference Semifinals.

Though his support of teams has a storied history of being blamed for upsets, the Raptors’ official ambassador spent a good portion of the game (rightfully) geeked out of his mind and hurling playful taunts as the team secured a 3-2 series lead.

Rocking a Breaker High hoodie — driving OG Canadian hype beasts nuts in the process — a courtside Drake cranked the trolling up to the maximum level.

During the tail end of the 4th quarter, much to the hometown crowd’s amusement, he was seen making Joel Embiid’s signature airplane wing celebratory gestures as the superstar left the court.

It caught on, as the crowd of more than 20,000 who packed the Scotiabank Arena for the game stood up and joined in the merciless taunting.

As much of a curse Drake is, he's a brilliant troll

Hopefully for Drizzy — and Raptors fans alike — Toronto can keep the same energy on Thursday (May 9) as the team heads to Philly for Game 6.