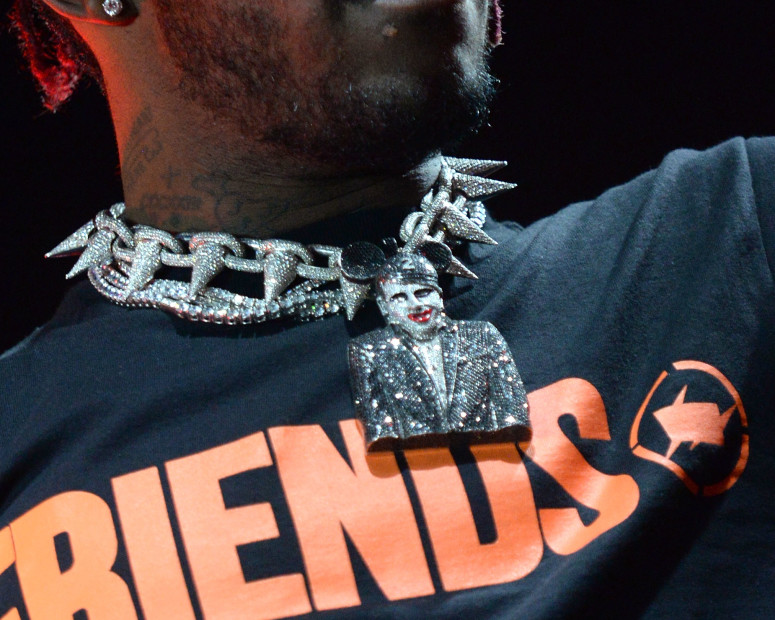 Hip Hop has always been influenced by the brightest spots of pop culture and the darkest crevices of underground counter-counterculture. That’s what makes it so inviting to anyone with new ideas to keep it effervescent and on the cutting edge. Therefore, peculiarity shouldn’t be felt about one of the biggest rap stars today, Lil Uzi Vert, citing glam metal legend Marilyn Manson as one of his main musical influences.

However, this is not to prove that Marilyn Manson is Hip Hop. Although Lil Uzi Vert was born in 1994 (the same year that Marilyn Manson released his first album, Portrait Of An American Family), Uzi was reared during the height of the rocker’s fame that decade, so perhaps he grew up with Manson close to his rap inspirations. But if you either didn’t know or simply forgot, Marilyn Manson has had a longstanding connection to Hip Hop long before the mumble rap star made him relevant again.

Here is a timeline of Marilyn Manson’s link to Hip Hop from 1990 through today.

Long before Marilyn Manson was signed by Nine Inch Nails frontman Trent Reznor’s label Nothing Records in 1993, Manson (born Brian Warner) was an Ohio-to-Miami transplant who penned music articles focused on heavy metal for a South Florida publication called 25th Parallel. But when he began his recording career with his band originally called Marilyn Manson & The Spooky Kids in 1990, his first track wasn’t a metal song. It was a rap tune titled “No Class/Styrofoam Raps.” The song sounds like a rap parody poking fun about a girl named “Kerri” with Manson freestyling and mimicking The Fat Boys’ Buffy the Human Beatbox. Whoever did drum machine programming had great boom-bap with 808 bass sensibilities.

Marilyn Manson’s former record label Nothing Records was a subsidiary of Interscope Records, which had a rap-heavy roster that included Dr. Dre, Tupac Shakur, Eminem, Snoop Dogg, and distributed Death Row Records during the 90s heyday. When Manson’s multi-platinum album Anti-Christ Superstar was topping the Billboard charts in 1997, the album’s lead single “The Beautiful People” became the biggest hit of his career. That same year, he announced that his labelmate Snoop Dogg had planned to do a remix of “The Beautiful People” with him. However, the song was never materialized. Just imagine Snoop and Manson together on the same track when they were the most polarizing figures in the music industry.

Eminem Sticks Up For Marilyn Manson After Columbine School Shooting

When Eminem was the biggest pop star on the planet; pissing off parents and right-wingers during the late 90s and early 2000s, Marilyn Manson had a huge target on his back all the same. The rocker was a constant scapegoat for the suicide of his depressed teen fans (“Mansonites”) as well as the Columbine, Colorado high school shooting massacre in 1999 that had 15 casualties including the gunmen. On the Detroit legend’s diamond-selling album The Marshall Mathers LP, Eminem stuck up his neck out to stick up for his Interscope labelmate on his hit single “The Way I Am” with the lyrics: “When a dude’s getting bullied and shoots up his school/And they blame it on Marilyn and the heroin/Where were the parents at? And look where it’s at/Middle America, now it’s a tragedy/Now it’s so sad to see, an upper-class city havin’ this happening.”

In the video, Marilyn Manson with the word “WAR” carved into his chest standing behind his fellow provocateur. Both artists are staunch defenders of their shared sense of artistic authenticity and integrity in their lyrics, without responsibility for other’s violent actions.

Remember When Marilyn Manson Was Featured on DMX’s song “The Omen”?

In 1998, DMX emerged as one of Hip Hop’s biggest stars releasing not one but two platinum albums that same year with It’s Dark & Hell Is Hot and Flesh Of My Flesh, Blood Of My Blood. The former album had a song titled “Damien” which features the voice of The Devil speaking to DMX’s subconscious, and the latter album had a reprisal titled “The Omen.” Both titles were allusions to the 80s cult classic horror film, and Marilyn Manson was featured as a backup singer on the track.

When Yeezy had worked with Rick Rubin to produce his electronic-heavy Yeezus album released in 2013, he was looking for a new musical direction with more eclectic sounds and politicized content. The result was a stadium rock-oriented album, and one of the vehicles, “Black Skinhead” that sampled Marilyn Manson’s 1997 hit single “The Beautiful People.” This was a sample bound to happen from some artist in Hip Hop. Why not it be Kanye who’s always looking to push the limits on where rap music can go?

Gucci Mane & Marilyn Manson Made A Minor Splash Together in 2013

Gucci Man expanded his reach past his general trap-loving audience for this one. Atlanta’s most storied guap collector and K-Mac collaborated with Marilyn Manson on a song titled “Fancy Bitch (Pussy Wet)” on Gucci’s 2013 mixtape, Diary of a Trap God. Manson sings a melodic, not-so-subtle hook as Gucci gets his romance on with his trap queen.

During a 2013 interview with the Phoenix New Times, he said he had recorded a song with one of Chris Brown’s main producers and songwriters. Marilyn Manson further admitted that he would rather abstain from drinking alcohol by smoking weed instead and prefers to hang out with gangsta rappers. Well, it seems he doesn’t love the blunts, but the blunts love him.

Drake & Marilyn Manson Turn Up Together In A Club Down Under

Drake and Marilyn Manson were spotted together at a nightclub in Sydney, Australia in 2015, where the rocker was spotted turning up to late ATL rapper Bankroll Fresh blaring through the nightclub’s speakers. Drake posted the experience on his IG account with a photo of Manson with the caption “I watched this guy go up to Bankroll Fresh tonight. Sydney is lit.”

I watched this guy go up to Bankroll Fresh tonight. Sydney is lit.

Bankroll had also tweeted his excitement that Manson loved his music.

We wish that he, Drizzy, and Manson could’ve done a track together. That would’ve been more lit than anything. #RIPBankrollFresh

During a recent Apple Music Beats 1 Radio with Zane Lowe, Marilyn Manson backed up his tweeted approval of the Philly rapper’s chart-topping single “XO Tour Llif3” and his thoughts on Uzi’s new album Luv Is Rage 2. Manson further states that he and Rick Ross recently had dinner together, and Rozay recruited Manson for a collaboration because “it’s his dream” to work with him. It makes sense since both artists started their recording careers in the port of Miami.

Sweet dreams are made of these, and who are we to disagree with the Bawse?