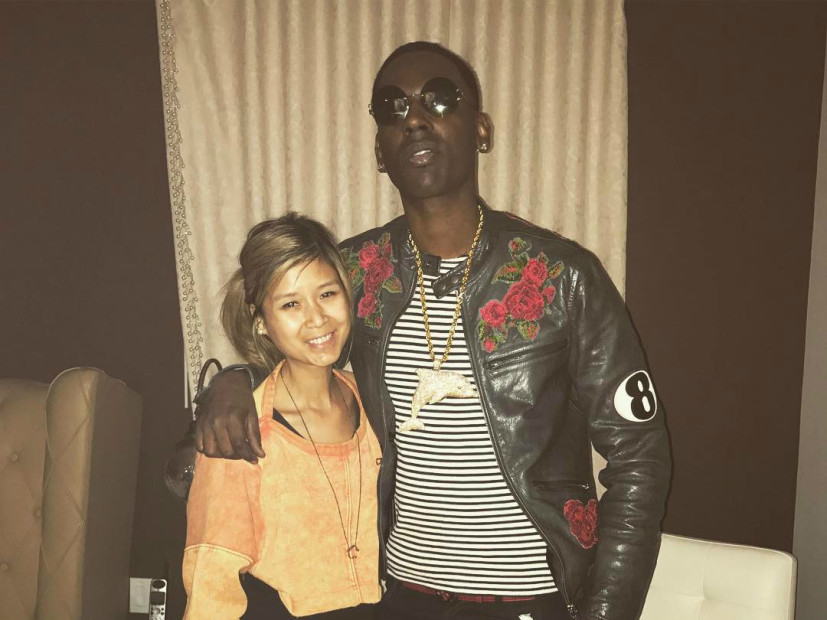 adultingd means debating for the last 3 hours whether or not i should call in sick.

Mannnnnn. You guys lmao. Talk about sacrifices. Talk about passion and dedication and love for what we do lmao. Ural and I literally got zero sleep last night/this morning, all for a Young Dolph interview. That shit was intense. I literally felt nauseated when 8 a.m. came around. All-nighters at 26 years old simply do not work. They shouldn’t even belong in the same sentence.

Huge thanks to my boss babe Lacy with Street Execs for texting me about this one. She knows I fuck with Dolph heavy. The only caveat: 2 a.m. FUCK. Really? Lmao. That was the biggest turnoff ever known to mankind. But yo. This is my life. Young Dolph’s private Gelato Kickback in the Hollywood Hills was going to be “an unforgettable experience,” and it unsurprisingly was. This was in light of his most recent project, Gelato, home to the Yo Gotti diss track, “Play Wit Yo Bitch.” That beef is too much. Like, can they both just be the kings of Memphis? Lmao. Bad joke.

It was a fucking chilly night in L.A. We meet at the Rite Aid parking lot in Weho at 2 a.m., only to be stuck on a shuttle for a whole fucking hour. Luckily, we had good company. Shout out to Sour Matt, the creative director of Backwoods, who kept me lit all night. Literally, three bleezies in that hour while we were waiting. I kept thanking him because truth be told, it calmed my nerves. With my impatience, I probably would have aborted the mission.

When we finally pull up to the crib in Hollywood Hills, I was so confused lmao. Was this it? The vibe was just weird. I felt like everyone was waiting for something. I warmed up eventually, but this was definitely no kickback I’d ever thrown. We quickly tried to track down Dolph’s managers, and eventually found Allen and Courtney. Special thanks to them for rocking with us.

I walk into the back room to find Dolph posted by the DJ, with the absolute fattest joint I’ve ever seen. It was the size of his face. That was the vibe tonight. Weed, girls, tacos catered by Trap Kitchen, Dolph bangers, and more weed. I was so happy to see Sylvon with Empire regulating. I totally forgot Dolph was signed to Empire. He’s fam. During the waiting game, I also had the pleasure of meeting Yung from Cali Swag District. He offered me the phone charger, which I thought was the kindest gesture.

Thanks for chopping it up with us #YoungDolph ? #Gelato mixtape out now ?

You know I don’t fuck with parties. Our mission was to get Dolph to speak on the reported shooting in Charlotte. And we swung and missed lmao. Literally, no one knows what really went down that night. I spent a good amount of time the night prior researching, and we were under the impression he would talk. Instead, he swerved those questions like a mf lmao. I was like. Damn.

Ural did an excellent job of publishing a dope piece, though. I just felt defeated lmao. Even after he rejected both the shooting and Yo Gotti beef, I still in my head was trying to see any way of getting him to break. No juice. He did give his two cents on the Remy Ma/Nicki Minaj quarrel. That was dope.

Dolph and I bonded over how dope Lacy is lmao. She kills. Then I asked if he had a stylist, to which he responded with a yes and a why. He seemed rather flattered by it, and proceeded to scream to his homie outside that I had asked. Hey, I love fashion. We were tucked away upstairs in one of the master bedrooms. Dolph took his seat in a smooth all-white chair. I noticed him rotating all his jewelry so they would show up in the shot. Shit, I would too. That dolphin chain around his neck could probably cover my rent. . . for the year.

Mission completed. After the interview, we had to wait patiently for our shuttle to come back. Going on 5 a.m., I just wanted to get the fuck home. I thought about calling an Uber, but realized I had no idea where I was and had no service. We were officially stuck. And then I felt my pockets and remembered Matt hooked it up with a Backwoods. Major shout out to him, he literally had about 15 pre-rolls on him tonight.

just remembered how much weed i came up on last night. thank you for the #gelato ?? @YoungDolph

Also, next to that beautiful PRE ice sculpture, were jars of Gelato. I met this girl from Oakland who was raving about how she smoked that good shit all the time. I was in the corner freaking out thinking this strain was a treat. I’ve honestly been too broke to buy bud, so I was too excited on my come up. At the end of the night, there was someone running in and out of the living room screaming “free blunts.” I went back to cop an extra pre-roll. This was like Christmas.

The shuttle came back around 5:30 a.m. I was in a car full of strippers, just trying to fit in lmao.

Fast forward to the longest day of my life (I eventually went into my work), and here I was. If there’s one thing you want to know about me, I can never say no. Especially when it’s free and something I would enjoy and actually pay for. The homie Manoj texted me about this game and I was all in. Except when I got out of the shower at 7 p.m. and questioned my sanity. Then said fuck it. Los Angeles Clippers vs. Boston Celtics at Staples Center. Leggo.

made it. ??? @LAClippers vs @celtics pic.twitter.com/1sqNIfV56P

This was the VIP Suite life I was not used to. After some ticket trouble (an hour of waiting in the freezing cold), I finally made my way inside and upstairs. No sneaking down tonight, this suite gave us a bird’s eye view of the court. Free food, drinks (WATER), and apparently I had just missed the dessert bar. I am not worthy.

Manoj is such a great human being. He genuinely enjoys connecting people that he feels will benefit from each other. Tonight, I had the privilege of hanging out with the guys of Five Four Clothing. Bernie, the company’s Sports Marketing Coordinator, told me they just shot a commercial with Chris Paul. Too lit. He’s such an essential player to the Clippers.

Also had the pleasure of meeting Derrick, the VP of Digital Marketing of Five Four. Damn. Surrounded by bosses. They ended up introducing me to Shawne Merriman of the San Diego Chargers. Whoa. Conversing prior, I shamelessly didn’t know who he was. But I did know who Tila Tequila was lmao. Shout out to these ladies bringing good energy into the room tonight.

Holy shit guys. Red Hot Chili Peppers are walking, living proof that they are GOAT. There’s simply no denying it. Probably one of the greatest rock bands to ever do it. But honestly, from someone who isn’t heavily knowledged in this genre of music (well, I used to be), I can’t even describe how amazing this show was tonight. I got chills every time they started a new track. I’m not sure any Hip Hop artist has made me feel this way.

As always, thank God for set times. RHCP were on from 9:10 p.m. to 11 p.m. I want to take this opportunity to say how blessed I am to be able to cover this show. Shout out to Brian and Peter with BB Gun PR who gave me an amazing seat inside Staples Center. I love that we are able to expand beyond Hip Hop. Yes, I was definitely here last night. Yes, I snuck down a couple rows lmao. I had to be as close as possible. And since I was solo, it made it a lot easier to ninja my way down.

thank you #hiphopdx for allowing me to continue to grow and spread my wings. tn i got approved for the #redhotchilipeppers first of 3 sold out shows in #losangeles and i couldn't be more grateful. ? lets get it. ? #rhcp #dtla

This was night one of three sold out shows in Los Angeles. So if you read this in time and you love the Chili Peppers, get on Vividseats.com and get your ass to the show. Talk about FOMO, this is something everyone needs to experience. Right off the bat, the band hit the stage and performed a set with just instruments. Everyone in the venue was on their feet. Straight up chills. This was legendary.

I swear 75% of the people in attendance were rocking a #RHCP T-shirt. They have to have one of the biggest fanbases to-date. Once the show started, I look to my right to see a girl Facetiming her friend lmao. I was like damn. That’s a lot. I’m going to provide you with the set list at the bottom of this piece because set lists are something I always like to refer to when I’m at a big show. I actually tried my best and think I only missed one track. This took a combined effort of Googling and asking the die hard fans surrounding me. Lmao.

The transition from the solo instrumental number into “Can’t Stop” was so fire. Literally, we all screamed. That drop was everything. I literally surprised myself with how many records I recognized. That just shows how great this band is. They played “Scar Tissue” and “Dark Necessities” next. For the latter, I saw the couple behind me shut their eyes and throw their hands up for the duration of the song. So beautiful.

By the way, this is The Getaway World Tour, in light of their 11th studio album. Damn. Seeing the lead singer Anthony Kiedis in his element on stage was beyond inspiring. They introduced “Right On Time” by describing it as a slow song to put babies to sleep. FOH. That was funny. The bassist, the guitarist, the drummer. . . every member is such a crucial component. “Californication” paired with this light show was beyond memorable.

My girl asked me to record “Under The Bridge” for her <3. I had to. This song speaks volumes. Next, they performed “Suck My Kiss” and “By The Way,” which had me screaming: “Standing in line to see the show tonight. . . and there’s a light on.” They proceeded to invite everyone to join them at Yuca’s on Hollywood for burritos after the show. Fucking love. The show ended with “Give It Away” and the most positive, uplifting speech I’ve ever heard. It went along the lines of: “Peace and love to everyone. Everything besides love is cowardice. Smile when you see everyone in the street. We gotta love each other.”