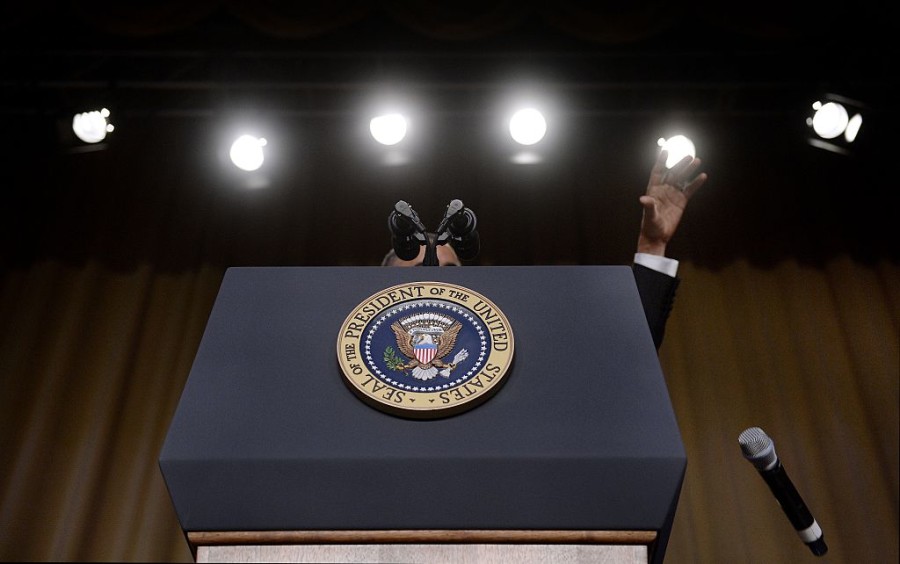 As a wide-eyed 24-year-old black man in the Metro Detroit area, I walked into my local polling place wearing my “Fuck Joe The Plumber” t-shirt in 2008 to cast my vote. For the first time in my life, I had the opportunity to participate in an American government system I never felt represented me until you shook my foundation. Like many of my contemporaries, I’ve never seen a government that I felt represented me let alone look like me. Sure, I can remember parts of Coleman A. Young’s 20 years as Detroit’s Mayor and Dennis Archer’s stint as Mayor on a local level. But a black man as President? That was unfathomable.

Now, I know that’s not the level of optimism you invoked and inspired but it’s not without reason. I’m an 80s Baby that’s mired in turbulence of Tricky Dicky’s reign and fortified in the agony of a Reagan administration that destroyed urban communities across the country. I watched as the effects of their policies ravaged Detroit as my neighborhood crumbled around us, prompting my mother to move us to the suburbs.

As a kindergartner, I remember vividly an incident in which two white male Hamtramck Police officers physically abused my mother and pulled her out of her car as it rolled down the street with me in the back. I remember those police officers putting her in handcuffs and placing her and myself in the back of that squad car. I cried for hours as I sat in the lobby of that cold precinct, waiting for them to release her. This was only one but many experiences I can recall as a kid where my government officials and employees let us down.

In school, I faced racial discrimination every day at a private institution my mom worked 14-hour days in a steel plant to put me through. White students would spit in my face and team up on me to provoke me to fight. Down the road at the private high school, my sister was antagonized daily by white students and even had her car keyed. Her principal was open with his racism. His wife would discuss in her math classes why her husband was racist. He even called our house one night at 10 p.m. and cursed my sister out and told her that she wasn’t wanted at his school.

But 24 years into my life, you came through like a piercing light in the darkest hour of the night. You were the first viable African American candidate to run for President. You were young and full of vigor and passion. You looked like me and were unapologetic about it. You were elegant, poised, educated, and well spoken.

So I cast my vote for Barack Hussein Obama for President of the United States and I went home the happiest I had ever been. And we did it. You told me I could, we could. And we did it. Our first African American President. The hope you instilled in us could be seen across the city. Literally. There was a gas station on Joy Rd. and Greenfield that changed its name to Obama Fuels and swapped out all of its marketing for your campaign logo.

It wasn’t just that you were the first African-American President but you were relatable! You embodied the essence of all of us: a product of a single parent household, your father wasn’t present in your life; you faced insurmountable odds and overcame them. Hell, you listed Jay Z as your favorite rapper. I’ll never forget seeing you and Brian Williams ride to Five Guys to buy lunch for your staff as Jay Z’s music played in the background. You made it cool to be who we are on a global scale that no entertainer could ever do.

And Michelle? Class personified. The best part of your presidency has been us not only seeing what a healthy black relationship and family looks like but a strong, successful black woman planted firmly in her independence as much as she is rooted in supporting you.

I’ve seen pictures and videos of the amounts of minorities you and Michelle welcomed to the White House where people like us previously weren’t. The recent Holiday party where the East Room swag surfed? Where you danced to Drake’s “Hotline Bling”? Given the contentious history of the White House and people of our color, that entire party was nothing less than a stroke of serendipity.

The past eight years haven’t been perfect. There have been moments where I felt defeated. Racism seemed to show its face more than at any time I can remember in my lifetime since you’ve been in office. Killer cops were exonerated and still walk the streets to this day while the families of their unarmed victims are left to pick up the pieces. As an African American, I placed an unfair burden on you to wave a magical solution. I think we all have. I’m sorry that we didn’t help you more when you needed us. We dropped the ball on each mid-term election during your presidency. We left you with a House and Senate that was hell bent on obstruction. I’m sorry that we placed the burden and salvation of our entire race on your shoulders.

In your time as President, you saved the American auto industry. Somehow you managed to turn around an economy that George Dubya left in shambles. You gave an entire disenfranchised group of Americans the right to love who they want and you gave us all health care. You gave and gave while we took and underappreciated at times.

Watching your farewell speech gave me a great sense of ambition, pride, and hope but also trepidation, panic, anguish, and outright disgust. We’re getting ready to embark down a path of this country being led by an Internet troll. A man who has proudly incited violence toward minorities at his rallies and doesn’t see where he’s wrong. We’re about to transition from a President who provided us with Spotify playlists of his favorite music to one who struggles to formulate coherent sentences.

I won’t be so selfish as to ask you for the answers of how we cope because for eight years you and Michelle have already provided us with the blueprint on how to remain graceful in the face of those who pray for our downfall. I’ve never had a father and I grew up shunning the idea of idols. It was me against the world in true Detroiter fashion. You are my idol, Barack Hussein Obama.

In the coming days, months, and years I can’t wait to see what life has in store for the Obama family. If your travels bring you to Los Angeles, I’d like to extend an invite to you and Michelle to visit us here at the HipHopDX HQ. Myself, our staff, and our readers and viewers would love to hear your insight on what we face going forward, what we can do, and what you’re listening to these days.

Thank you for your service, dedication, and for your grace and passion. We’re retiring your number and your jersey is going up in the rafters. It’s an ESPN Instant Classic. None will emulate the way you were able to wax poetic on Capitol Hill. You dripped more sauce through the halls of the White House than Eazy-E did when he spilled Jheri curl juice on Ronald Reagan’s shoes.

Marcel Williams is Michigan transplant thriving in Los Angeles. Catch him on Twitter at @WHUTUPDOE.