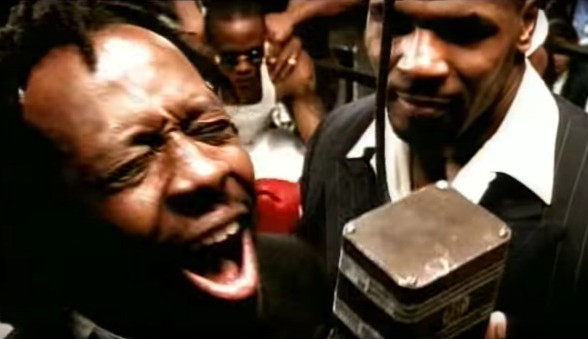 Rap beef inclines us to watch the warring artists’ every move as the action rises towards climactic heights. But when the hype of a fracas between two charlatan boxers like Soulja Boy and Chris Brown is contrived for mere self-promotion, we’d rather laugh to go along with the fun like an old MTV Celebrity Deathmatch episode than to anticipate the winner to hold weight over the defeated.

"IF YOU SHOW UP”… It's going down. I'm going to teach him how to knock your ass out @souljaboy. Song dropping soon on my YouTube with @chrisbrownofficial. Produced by @thedamonelliott. S/O @fredfrenchy.

“If You Show Up”: This garbo will reportedly have a full record and an accompanying music video.

As we await the showdown, we need the essential cast of characters that fulfill the roles of protagonists and the villain’s cronies and a ringleader. 50 Cent finally gets to be the Don King-like boxing promoter he’s always pined for, which happens to be between two ex-friends quarreling over a damsel in distress. Soulja Boy, the supposed antagonist, needs a credible boxer with heavy clout in the rap world to back him in his corner and help strengthen his vitriol towards his target, Chris Brown. To answer Soulja Boy being trained by Floyd Mayweather, Brown picks “Iron” Mike Tyson to reprise his role as a “trainer” for a rapper to settle this faux beef. And for Mike to record a diss song aimed at Soulja Boy only makes us roll our eyes and laugh similar when Martin Shkreli threatened to have bars for Ghostface.

Eat, Eat, Eat, MCs: “Second Round K.O.” just may be the only time the better song in a rap beef resulted in an L.

Even though he hasn’t had too many past instances for training rappers, Mike Tyson doesn’t have the greatest history in doing so. The last time that Mike got involved in a rap beef was the infamous Canibus beef with LL Cool J after the latter’s “4, 3, 2, 1” hit single in late 1997. If you recall the history of that beef, Mike was a former longtime friend of LL Cool J who switched his alliance to Canibus and immediately turned Benedict Arnold to the veteran prince of rap. But fans didn’t seem to care because Mike had much media attention per his then-recent return home from jail and his title bout defeats against Evander Holyfield.

Having Mike involved was more than enough for Canibus’ objective was to vilify Uncle L when he subsequently changed his verse and subliminally dissed the battle rapping upstart for “idolizing” the mic tattoo on L’s arm that ‘Bus wanted to lyrically “borrow.” It seemed like a grown man was beating down on a kid, and Canibus’ eviscerating response with “Second Round Knockout” in 1997 — one of the greatest diss records in the genre’s history — was the perfect rally for the underdog challenger to smack back at the aging champ. The single got so uprooted into the pop cultural lexicon that I recall people bought the CD at Walgreens, placed alongside a random NOW compilation and the “Macarena” maxi single.

“Heard that convicted rapist on the record too/Fresh out of jail, ass cheeks still black and blue/Tell me bout the things Ear Biter taught you/How to bust a nut or two? (Yeah that’s butta boo)” — LL Cool J on “The Ripper Strikes Back”

But the hype that followed “Second Round Knockout,” and Tyson’s memorable intro galvanizing him to “eat, eat, eat, eat, MCs” in Canibus’ epic diss and appearance in the video served too short. Almost a year-and-a-half into 1998, the anticipation of Canibus and his alliance with the fun-loving Wyclef’s Refugee Camp (simply based on Canibus’ West Indian heritage and not on musical synergy) went stale and ultimately evaporated once Canibus dropped his abysmal Can-I-Bus album. And LL Cool J’s “The Ripper Strikes Back” response seemed like a win to many listeners, even though it was a stalemate per L’s kinetic vocals yet wholly lukewarm track. It was like a bad championship game played by both teams, and Mike’s involvement really did nothing more than momentarily add some flash in the pan when the beef was cooking.

Pretty Much: Sometimes a caption is worth 2000 words.

Fast forward 20 years, Mike is posing in the same position, but now trying to gain appeal with rap fans and failing miserably with a diss song so kitschy that we give him an “E” for effort and “T” for nice try. The legendary prize fighter channeling his late mentor Cus D’Amato and reducing himself to cannon fodder for Brown. Someone in Breezy’s camp should really tell Mike “don’t even turn his effin mic on.” But this time, Tyson isn’t the epochal punchline that Golden Era rappers used to knock MCs out in one blow with their lyrical onslaught.

Even with a face tattoo that would scare anyone, Mike is too much of a lovable character today that is a screaming target for memes, GIFs, and jokes. Like Soulja Boy’s former moniker, when it comes to Mike on the mic trying to rap, Chris Brown and his camp should “tell him” (politely of course) to fall back from the recording booth and stick to the stick and move tutorials.