10 Things We Can Expect From "Empire" Season 3 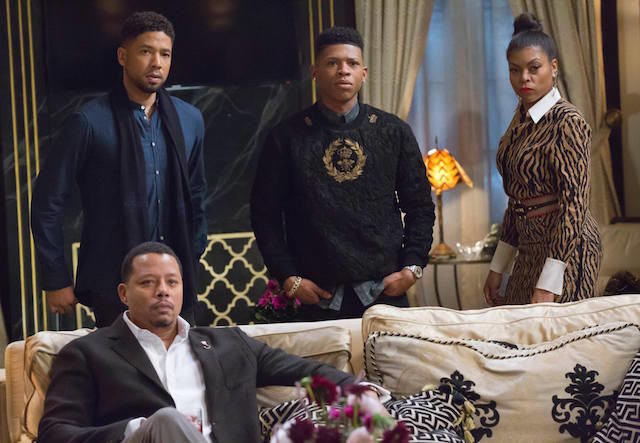 Wednesday night, millions of viewers were glued to the small screen and waiting with anticipation to answer one single question. Who fell over the balcony during Hakeem’s failed wedding: Rhonda or Anika?

Who fell over the balcony during Hakeem’s failed wedding: Rhonda or Anika?

Following much ridicule for season two, Fox had to come strong with the third outing of its hit show Empire. Scaling back the ridiculous cameos and introducing a compelling villain in Tariq, Lee Daniels and the crew aren’t holding back as they face still competition in an era full of television series featuring African American leads. With the episode one of season three over, here are ten predictions for what’s to come in the next chapter in the Lyon saga.

All photos courtesy of FOX

A Vast Improvement On The Music Front

At the time of its inception, Empire boasted of Timbaland on board as musical director, with Ne-Yo being recruited for his platinum pen game shortly after. Even for a fictional rap soap opera, there’s no way in Hades anyone can be a convinced such cornmeal like “What the DJ Spins” was a big hit in any cinematic universe. To be honest, outside of “Drip Drop,” if it didn’t come Jussie Smollett’s “Jamal” character, rap was taking L after L.
Last night however, Yazz snapped à la Big Sean in the booth, given new promise that the soundtrack will have Hip Hop hits that can live on past the season. As a matter of fact, HipHopDX will be premiering a new joint featuring the youngest Lyon that is also pretty good.

Tariq Is The Perfect Foil To Lucious’ Fuckery

A late addition to season two, the shadowy figure Tariq (played by Morocco Omari) was revealed to be Lucious’ half-brother and FBI agent sent to take the founder of Empire Enterprises down. The two appear to be total opposites of evil and gives Lucious a real villain to contend with. By the end of season three’s premiere, Tariq has already set up wiretaps in his crib.

We’ve seen it time and time again. Anyone who crosses the Lyon family finds themselves in a makeshift tomb — right where they stand. We’re talking about a series where the lead character — the proverbial Diddy of the primetime TV rap game — shoots people who investigators can easily tie him to their bodies and drops corpses in district attorney’s passenger seats. (Complete with the buckled seat belt. Safety first!) The hourglass holding the sands of time for Xzibit’s character Shyne Johnson (one helluva name) have already begun to waft, as his behavior has been counterproductive to entire growth of the multi-million dollar enterprise. It’s just all a matter of what color casket he wants.

After months of anticipation, fans finally found out who fell over the railing at Hakeem failed wedding. And, it was Andre’s wife Rhonda. The devastating moment obviously took a toll on the already fragile mental stability for the eldest Lyon. Hearing and seeing Rhonda during psychotic episodes serve as a way for Andre to realize the truth about his place in the family, which will most definitely show up in more episodes.

Do you remember Snoop Dogg, Juicy J and Pitbull dropping joints with support from the Lyon clan? What about Charles Hamilton and Rita Ora’s collaboration? Is Petey Pablo getting out of jail soon? Unless you’re an Empire stan, chances are the blitz of cameos from actual superstar rappers playing themselves and fictional versions of themselves couldn’t be any less memorable. Judging from last night’s episode, it doesn’t appear that the characters popping up for surprise scenes plan on sticking around even still.

Lucious Will Play Anika Like A Game Of Minecraft

Lucious is a straight savage. He not only married Anika to keep her from testifying against him in a federal indictment, but he publicly named himself as the father of the child she has with Hakeem as well. Moments before she gives birth in the delivery room, Lucious literally gives her commands before she’s questioned by law authorities about Rhonda’s death.

Ever since 2005’s Hustle & Flow, having Terrence Howard and Taraji P. Henson opposite one another has been a joy for audiences and not having them secretly lust after one another isn’t as much fun as the cold war we watched them fight in “Light in Darkness.” When the inevitable reunion comes (we guess in an engagement by end of Season 3), it will be just as fun seeing the ship hit another iceberg only to be patched up sooner than later.

It’s Jamal’s Turn To Be Psychotic

With all the twists and turns and murder and malice Empire has to offer, it’s no surprise that most of the characters have unraveled mentally, even with the lavish life their careers have offered them. Lucious went full Dwight Walker when he decided to musically tap into his strained relationship with his mother. The eldest son, Andre succumbed to the pressure of being “the responsible one,” arguably has the crown for the show’s most dramatic scene when nearly blew out his brains fully-clothed in a running shower and was later revealed to be a longtime sufferer of mental illness. And there’s Hakeem, who survived a torture-kidnap scenario but conquered his PTSD with the finest Instagram models the city has to offer.

Now, after surviving a gunshot from beloved character Freda Gatz (gone way too soon, Empire writers), it’s Jamal’s turn with a bout of the crazies. Chances are, he’ll be fine come mid-season.

Juanita Is The Most Down Azz Maid Ever

For the past three seasons, Juanita has seen everything last one of the seven deadly sins go down inside the Lyon household and hasn’t snitched once. Anyone else in her position would have TMZ on speed dial with their bank account routing number memorized. She’s watched family fights, business deals and the workings of a shady lawyer among other ridiculous moments and hasn’t said shit? Give her a raise. Come to think of it, put her name in the will.

An Overall Better Season Than The Last

By the looks of season three’s first episode, Empire is tighter on the writing and thankfully, more self-aware. Getting Lucious to discuss label business with Birdman is beyond hilarious for those who have kept up with the recent Cash Money drama. And, I believe the show writers totally understand on how social media would react. Bringing Rhonda back from the dead through Andre’s psychotic condition was clever. Tariq vs. Lucious might be a future hashtag that could possibly rival Ghost vs. Kanan.