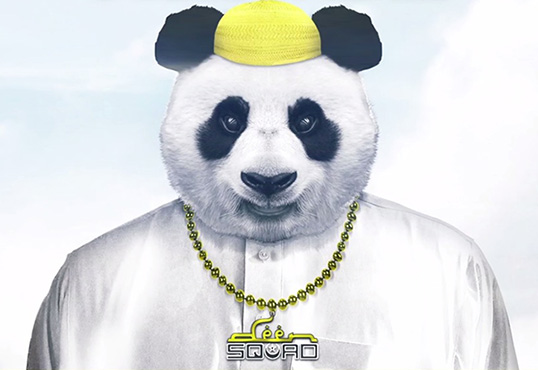 After a non-stop climb through the beginning of 2016, “Panda” may finally be on its way down. The hit song was dethroned from the #1 spot on Billboard’s Hot 100 this week by Drake’s “One Dance,” although it still saw a surge of attention when the official video finally dropped.

The track by the 19-year-old Brooklyn MC has become arguably the defining rap song of the year so far, even after major releases from Drake, Kendrick Lamar and (Desiigner’s chauffeur and label boss) Kanye West.

Love it or hate it, it has undeniably become part of the current cultural zeitgeist, spawning countless remixes and parodies.

Some were hot, some … were weird.

Here are the most unusual versions of the song we could find.

The White People In Hats Remixes

This folksy cover by Swedish duo Smith & Thell might be more appropriately dubbed the “Polar Bear Remix” since there’s no black in this bear at all.

Likewise with the version from Karmin, a group that has hit viral success with their covers of Chris Brown’s “Look At Me Now” and Nicki Minaj’s “Super Bass.”

We already listed this one as one of the standout remixes of the track, but at its core, this version is conceptually bizarre. Lupe revamps the lyrics into a tribute song to Chinese fast-food chain Panda Express, likening his chopsticks skills to The Karate Kid’s when he raps, “Waiting in line I got manners, I work with them chopsticks like Daniel.”

Opening with an audio clip of Hillary Clinton telling The Breakfast Club hosts she keeps hot sauce in her purse, this satirical track from news website Oogeewoogee holds nothing back on the Democratic presidential contender’s pandering to minorities. The vocals are credited to battle rappers Voss and Rone, the latter of which happens to be the current King Of The Dot champion.

Barack Obama starred in his own remix too.

Athens MC Phyrosun (who has previously worked with DJ Green Lantern and Memphis Bleek) shows that the song is now a global phenomenon. Though his version is in Greek, you’ll probably catch about as much as you did the first time you heard the original.

Meanwhile, Canadian rappers and devout Muslims Deen Squad put an Islamic twist on the track with their brand of what they call “halal hip hop.”

New York producer Blockhead put a Latin spin on his remix, and defended the song on his website where he wrote, “His verse on this song is some straight out of project blowed abstract rap flow kinda shit. Sure, I can’t make out most of the words and , topically, i doubt it’s anything special but my point is…the dude can flow.”

You might not guess it from the clean-cut screenshot from the video, but this two-man pop/trap remix from YouTubers Josh Levi and Kurt Hugo Schneider kinda goes hard.

Joyner Lucas proved how inescapable the song is with his anti-“Panda” tirade … that uses the Menace-produced beat. “I’m tired of this fuckin’ ‘Panda’ song,” says the Massachusetts MC, before blazing through his version.