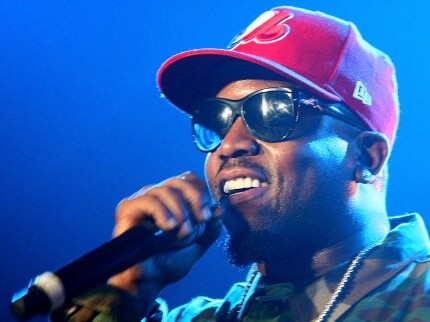 “My big brother was B.I.G.’s brother/So here’s a few words from ya kid brother/If you admire somebody you should go on ‘head tell ‘em/People never get the flowers while they can still smell ‘em/An idol in my eyes, god of the game…”—Kanye West, “Big Brother.”

As if the past few days didn’t contextualize his legacy, Phife Dawg was a central component in A Tribe Called Quest, his jocular, irreverent and playful rhymes a vital balance to Q-Tip’s abstract, brainy Afrocentric lyricism. In fact, without Phife, Tribe would not have been the game-changing force they were.

Yet, on the flipside, it’s possible that we perhaps didn’t praise him, and what he brought to the equation, enough while he was still with us. While we all love endlessly debating our Top 5 MCs of All-Time, those discussions usually draw from a fairly narrow pool of talent, a constant rotation of the genre’s supreme twenty or thirty MCs who dominate Hip Hop’s history books. Beyond them, however, there are literally hundreds of unappreciated and overlooked rappers who’ve all left their own unmistakeable footprint on the Hip Hop landscape, but very rarely get their due credit—either commercially or critically.

So, with Phife Dawg still very much at the forefront of our thoughts this week, and Kanye’s lines above also in mind, here’s a warm celebration of 10 ferociously talented rappers who, for various reasons, deserve a little bit more recognition.

Last year’s N.W.A biopic Straight Outta Compton made a small handful of mistakes we were willing to let slide, but perhaps the most glaring error was the way in which MC Ren’s contribution to the group was downplayed. As the movie focused predominantly on the relationship between Dre, Eazy, Cube and Jerry Heller, Ren had just a handful of lines, his on-screen character coming over almost as a benchwarmer. Such a sidelining only confirmed how unappreciated Ren is as a rapper.

In reality, he was already a formidable MC when N.W.A dropped their debut, but it was on 1991’s EFIL4ZAGGIN, their second full-length set, that his evolution was truly realized. Though last year’s movie barely mentioned it at all, let the record show that EFIL4ZAGGIN is a dark, violent apocalyptic record, brilliantly capturing both the crew’s internal turmoil and the wider upheaval all around them. Now widely considered a gangsta rap classic, it’s due in no small part to Ren’s lyrical pyrotechnics. He would later release a slew of solo material after N.W.A dissolved, the best of which are Kizz My Black Azz (1992) and Shock of the Hour (1993).

Best known for holding down the lone guest spot on Nas’ Illmatic, as well as his own solo breakout hit “Sugar Hill”–which soundtracked the ’95 summer–Brooklyn’s AZ has put out a string of solid albums over the past two decades, even though his profile has remained frustratingly lower than many of his lesser-talented rapping contemporaries.
Something of a visionary, his hardcore rags-to-riches rhymes on “Sugar Hill” forecast the street-savvy-lyrics-meets-‘80s-R&B-loops template that would come to dominate mainstream Hip Hop towards the end of the ‘90s and into the new millennium. Yet AZ’s frontline street reportage frequently carried a broader perspective than his competitors-unfortunately, this never translated into mainstream success despite the irresistible soulful backdrop. Still, his catalog is stacked with heat, with gems like “Your World Don’t Stop,” “Once Again,” “Problems” and “The Come Up” displaying his impressive multi-syllabic flow that harkens on Kool G Rap in his prime.

Somewhat fittingly, Blaq Poet–a purveyor of that rugged, roughcast, razor-sharp Hip Hop for which his Queensbridge home turf has become renowned—first emerged at the height of the infamous ‘Bridge Wars’ in the mid-‘80s, serving up a savage dis track toward KRS-One and the BDP crew in the form of “Beat You Down.” He then teamed up with the legendary DJ Hot Day as PHD (Poet & Hot Day), dropping the excellent 1991 album Without Warning and a stack of superb singles on the storied Tuff City label. Alongside Solo, KL and Hostyle, Blaq Poet then formed Screwball, who issued the East Coast underground street favorite Y2K, before enjoying a stellar solo run in the early-to-mid 2000s.

Still not convinced? Peep the blistering verse from his 2003 DJ Premier-produced solo single “Poet Has Come,” which summarizes his hardcore rep perfectly: “Fuck the radio play/I don’t need it anyway/Remember back in the day in L.A., N.W.A?/That’s the type of shit that I’m on/Gotta get my muthafuckin’ shine on/Murderin’ every beat I rhyme on…”

Sure, Kendrick Lamar may have issued 2015’s definitive rap album with To Pimp a Butterfly, but it was Dr. Yen Lo–the pairing of rapper Ka and DJ/producer Preservation (who crafted last year’s true slept-on Hip Hop masterpiece in Days With Dr. Yen Lo). Very much a late bloomer, the Brownsville-based MC (and sometime firefighter) actually surfaced way back in the 1990s as part of the Natural Elements crew. He largely disappeared from view for several years, only later showing up on GZA’s Pro Tools album in ’08. Heading back to the lab to hone his craft, Ka re-emerged in 2012 with the stunning Grief Pedigree and, proving it was no fluke, swiftly followed up with equally brilliant The Night’s Gambit (2013). Both albums–as well as the aforementioned Dr. Yen Lo project–display Ka’s compelling brand of gritty, gutter-level street commentary that comes sprayed with a cold, brooding, atmospheric haze, his raps delving into the tense psychology that informs New York’s dark underbelly. Crime noir rap at its absolute finest.

His remarkable Instagram page, which is solely dedicated to pre-Hip Hop era NYC culture, barely scratches 1,000 followers and puts his inclusion on the list into proper perspective.

Jean Grae first got heads open way back in the midst of the fevered independent Hip Hop boom of the late 90s as part of Natural Resource, going by the MC name What? What? Switching to her current moniker, she unveiled her superb debut album Attack Of The Attacking Things in 2002, the first of more than half a dozen releases that displayed an intricate flow that was underpinned with her unique brand of sarcastic, biting humor and witty observations.

Sadly, the bullshit-filled music industry has always found her considerable talent too hot to handle, and despite widespread critical acclaim, Jeanie Jean’s music–which ranges from the hilarious (“How to Break Up with Your Girlfriend”) to the haunting (“Taco Day”)–never crossed over to a broader audience. Still, she’s continued to release work in her own uncompromising style, more recently recording a self-produced R&B album, #5, in 2013. Consider Jean Grae a veritable Hip Hop national treasure.

You may be wondering just what the fuck a member of the beloved De La Soul is doing on a list of unappreciated MCs. The group is revered Hip Hop royalty globally, one of the genre’s genuinely game-changing crews whose catalog is crammed with classics despite them constantly swimming against Hip Hop’s tide. But this is all about Posdnous as a rapper. Truly one of the best to ever pick up a mic, Pos still is too often absent from those endless ‘Top 5 Dead Or Alive’ debates, a baffling omission when you consider his expansive themes, lyrical pedigree and pure rapping ability. His final verse on 1996’s Stakes Is High served as a stark, prescient warning of the perilous direction in which rap was headed, and remains as relevant today as it was 20 years ago. It’s about time Pos was considered one of the G.O.A.T.s.

Similarly, Outkast–like De La Soul–are one of a select few groups who didn’t just record great rap music, but pushed the genre’s boundaries, breaking new ground in the process and reshaping the possibilities of how Hip Hop could sound. But while Andre 3000 is rightly lauded as one of the foremost lyricists of his generation, partner-in-rhyme Big Boi is still too often overlooked by many.

Yet far from kicking back, getting comfortable and resting on his laurels after some 22 years in the game, Big Boi remains an active artist (and a prominent philanthropist), continually releasing new music which is willing to take risks–a rarity for many rappers at this point in their careers. His forward-thinking experimental streak still reaps rich sonic rewards. See 2015’s solid Big Grams project—a collaboration with electro-rock duo Phantogram–while his solo material is brimming with straight-up Hip Hop bangers (“Shutterbug”, “Gossip”) that reaffirm his legendary credentials.

King Tee issued a handful of independent 12”s in 1987-the best of which is the superb “The Coolest” on the Techno Hop label–but it was the release of debut set Act a Fool a year later when the South Central L.A. rapper really came to prominence.

While King Tee’s flow and cadence were always more akin to the formidable New York stars of the day, Act a Fool’s truly timeless opening line (“It’s Friday night on the streets of L.A….”) and its countless West Coast rap tropes made the album is undeniable Cali classic. He cemented his rep as a L.A. Hip Hop pioneer with the equally inspired follow-up, At Your Own Risk. He rolled out several more albums over the next few years, and was instrumental in the early success of his left coast protégés Tha Alkaholiks and their Likwit Crew. Long live the King.

Kicking mind-bending rhymes over rugged New York Hip Hop beats, Godfather Don specialized in the kind of skewed, abstract, uncompromising east coast Rap that traces its roots back to the super-scientifical flows of celebrated artists like Ultramagnetic MCs and, a few years earlier, T-La Rock (Don even paired up with Ultras’ Kool Keith for the Cenobites project in ’95).

Though he dropped his debut album, 1991’s now highly sought-after Hazardous, on Select Records, he was long associated with the inimitable Hydra Entertainment imprint (which also brought us Blaq Poet’s crew Screwball). There, he issued a stack of landmark singles in the late 90s, including the sublime triple-shot “Styles By the Gram” / “World Premiere” / “Properties of Steel” and the David Bowie-sampling “Fame.” In recent years, reissue labels Diggers With Gratitude and Chopped Herring Records have continued to roll out previously-unreleased Godfather Don material in limited vinyl runs. Then, pulses were set racing on March 24 when, seemingly out of nowhere, a new clip of Godfather Don lounging with fellow 90s’ subterranean spitters Sir Menelik (a.k.a. Scaramanga) and Mic-EL appeared on Sun Large Records’ Facebook page announcing a new collaborative album.

Reflecting his Philly roots, Kurupt boasts an intricate flow that contrasted sharply with the laid-back drawls then typical of West Coast rap when he first emerged on Dr Dre’s The Chronic. Sterling guest appearances on Snoop Doggy Dogg’s Doggystyle enhanced his profile further, leading to the double-platinum Dogg Food in ’95 as one-half of Tha Dogg Pound with his homie Daz Dillinger. Never one to shy away from drama, Kurupt was part of the infamous “New York, New York” record; an inadvertent yet major flashpoint in Hip Hop’s ruinous East Coast/West Coast war. He also later fired his own shots on “Callin’ Out Names”–a fairly self-explanatory track which attacked an assortment of MCs, including drama-magnet, 50 Cent.

He may have been overshadowed by Death Row’s marquee names–Tupac, Dre, and Snoop–at the height of the label’s success, but he could more than hold his own when it came to pure lyrical talent.