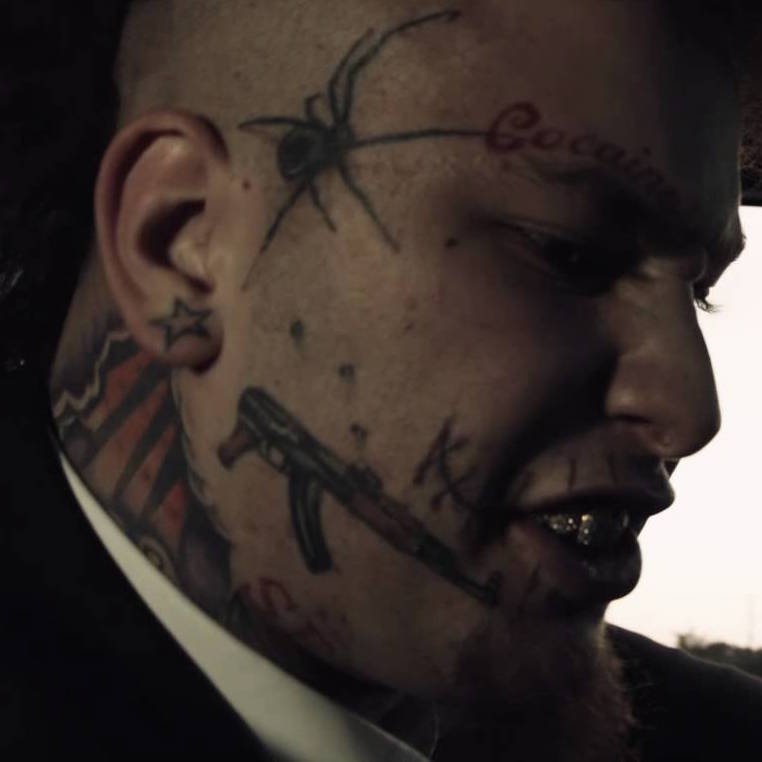 Shared experiences between humans are a natural occurrence. This is why I never tripped too much about the current upsurge in white rappers. At this point, Hip Hop has reached an unprecedented amount of mainstream acceptance. Therefore, who isn’t surprised when any ethnic group finds some enjoyment in one very specific part of the culture? As Americans living in a “post-racial” society barriers have been broken on both sides. It’s truly a beautiful thing. 2015 has proven to be an interesting year for white rappers, as well. Action Bronson, Mac Miller and even Yelawolf’s Confederate Flag loving self  all have shown points of view that are fairly authentic. Hell, Riff Raff‘s self-aware take on Houston Hip Hop is entertaining and harmless, at least on the surface. This year has also produced the rise of two white rappers who represent a very ugly trend formulating. That’s right ladies and gentlemen, Stitches and Slim Jesus. A first in Hip Hop history, a few white rappers are actively participating in a system that murders black men and women without understanding the causes of where the violence in that form of music comes from.

But why? An article last year in the Miami New Times revealed a past for Stitches a.k.a. Phillip Katsabanis that totally puts Rick Ross’s parole officer narrative to utter shame. Born of Cuban and Greek descent, Katsabanis allegedly comes from a fairly lovely background. Outside of some very insignificant offenses as a child, he’s yet to form an arrest record as an adult. Allegedly, he has ties to Chicago’s Almighty Imperial Gangsters Nation through his befriending of amateur boxer Leonel Carrera. For someone who claims to be interlocked in the criminal world, he married a judicial assistant and Paris Hilton’s My New BFF contestant Erica Duarte. The two would literally give birth to a Baby Gap model. Real gangsta shit, right? From the looks of things, the only white Stitches is selling is oppression, racial guilt and possibly smallpox(shout out to Soren Baker for that one). For someone beginning their rap career as Lil Phill, he’s grown into a parody with a loyal, mainly white fanbase. And now he’s taking shots at The Game over authenticity. Talk about the pot calling the kettle black.

Following the success of “Drill Time,” Hamilton, Ohio native Slim Jesus went on Vlad TV and openly admitted to not being about that action. This comes after threatening to murder, sell drugs and other degenerate actions toward people who are presumably African American. Of course, like most blacks unaware of their own self-destruction, he’s managed to have a few black men follow behind him like props. It’s interesting that Slim Jesus would find inspiration from a music essentially birthed by how crazy Southside Chicago has become over the years. We’re talking about a city featuring one of the worst school systems in the country, a significantly high unemployment rate and an extremely racist Chicago Housing Authority that contributes to the high crime rate. The likes of Chief Keef, Lil Reese and everyone else in between are mere symptoms of a very serious problem that white kids like Slim Jesus have been removed from.

So why do rappers like Stitches and Slim Jesus exist? The answer may be a lot more complicated than one wants to realize. I get it, Hip Hop is old enough for many to find attachment to a variety of eras and subgenres. Gangsta rap isn’t any different. But, there’s a level of reality that goes beyond Hip Hop and that’s something both artists aren’t going to care much about. White privilege and cultural appropriation has reared its head in the worst possible ways. Not only is the culture itself up for grabs but so is a lifestyle that’s destroyed families and broken up communities. Watching the “Drill Time” video last month, my paranoid self thought this was another tactic for white folks to join in all the fun black-on-black violence brings. I was called crazy and I believed it before letting the thoughts go. After watching Stitches use the n-word like he’s this year’s V-Nasty, I’m thoroughly convinced this is another way Hip Hop is being used against its creators.