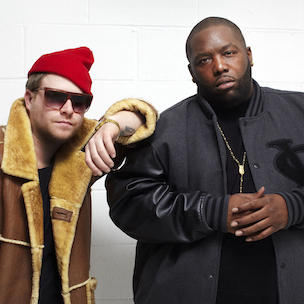 The Summer Of Run The Jewels

“Brooklyn will burn to the fucking ground tonight!”

This is how a temporarily handicapped Killer Mike introduced himself to a crowd assembled in Williamsburg on a rainy summer Sunday night after entering stage right, the same way him and El-P do every night, to the sound of Queen’s “We Are the Champions.” Mike was in a brace after hurting his shoulder several tour stops earlier, and with their frantic touring schedule the group had been at Bonnaroo Music Festival some 48 hours and 850 miles ago.

For most artists, touring is next logistical move following an album release. With sales at an all time low due in part to streaming and piracy, the business model is often dependent on live shows. The albums have taken the position of mere placeholders, then, serving as an advertisement for upcoming tours.

That paradigm works for many Hip Hop acts, but not Killer Mike and El-P. Run The Jewels is not gaining their fans through their musical releases, they are converting the masses to their one of a kind sound with an unforgettable brand of live performance.

The tandem that began working together on R.A.P. Music before forming supergroup known as Run The Jewels is winning over audiences at every festival, arena and amphitheater they infiltrate. Killer Mike and El-P know that their value is in performance. With this knowledge, the group made their sophomore effort, Run The Jewels 2, free to download and counted on winning crowds over by putting on shows that are memorable in their chaos and entertainment value.

Most recently, the duo appeared on the second week of The Late Show with Stephen Colbert and did an exemplary rendition of “Angelduster” with Grammy winners TV on the Radio playing behind them. Another performance crushed alongside the exposure, viral videos and fanfare seems are posted after every stop they make.

The reason  audiences are being won over was on display at the conclusion of Northside Festival in Kings County. Despite Mike being in a sling, he was in constant motion accompanying his often combative battle lyrics with the aggressive motion his shows typically include.

El-P was in a surreal state, trying to come to terms with playing in front of a large crowd just miles from where he grew up, which, perhaps, could have accounted for why this show was so over the top. It was an elixir of frightening energy, full throttle showmanship, and guest appearances ranging from Gangsta Boo to Nas. But a simple Google search can debunk any theory of that sort.

Touring feverishly since October of 2014, when their second album came out, their tour has been followed by fanfare and discovery, leaving reviewers with their jaws slack and keyboards clicking in their wake. On one of music’s biggest stages, Coachella, they left their mark among the crowd of several hundred musical acts in two weekends. In Billboard’s review of the Indio-based festival they ranked Run the Jewels the second best act of the entire extravaganza citing, “Limitless energy and good vibes, between their signature syllable-twisting verses, Mike frequently breaking into celebratory dance steps and the normally cynical El-P expressing true awe at the moment.”

The praise followed them throughout the festival tour with Consequence of Sound ranking them among their best at Bonnaroo writing, “El-P and Killer Mike’s chemistry is contagious. It’s a big part of why Run the Jewels works so well, especially in a live setting. They came onstage to a packed tent and set the tone by saying, “We’re Run the Jewels, and we’re here to fuck shit up! From that moment on, it was a pure adrenaline rush of a show,” Consequence of Sound continued. “RTJ kicked it old school and proved that you could still kick ass with just a DJ and two microphones.”

As proof that these praises are no fluke they even made an impression among the month-long celebration in Austin known as South By Southwest. The Guardian wrote of their final show of the festival, “This is an entirely unrestrained set, helped along by a crowd who really do give it their all…the air is filled with a pulsing sea of pumping fists. Run the Jewels may be a late-career renaissance for the pair, who are both entering their 40s, but as their set proves, they are worthy of every column inch of hype.”

Factoring in the groups chemistry, old-school rap tropes, belligerent lyrical prowess and political awareness, which landed Killer Mike on a viral CNN interview, this act is above all else one of a kind. Seeing just what they are capable of in person has opened eyes to how unique and incendiary their energy and art is. The new fans of Run the Jewels are numerous and diverse, not even limited by national borders.

In what must seem like years ago to the tour ravaged duo, they even impressed in the United Kingdom as evidenced by this review in the Irish Times, “Against so much innovation and agitation, even that hoary hip-hop cliché – “Make some motherf***ing noise!” – begins to sound refreshed. In these skilled hands, in these insurgent times, it could be a manifesto.”

As the tour approaches a one-year anniversary and eventually eclipses into November, they will all but assuredly wow crowds across festivals, states and countries like they have already been doing for ten months. By the time it is all said and done and summer comes and goes in the northern hemisphere, this will be known as the “Summer of Run the Jewels.”