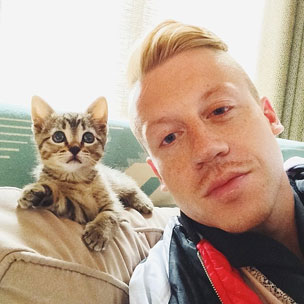 Macklemore’s “Downtown” Is The Most Sellout Song Of 2015

Say what you want about formulaic music, but it works. Pop songs are an amalgamation of elements carefully thrown together. When it’s done right, you get genius like “Thriller,” or more recently “Uptown Funk” and when it’s done wrong you get just about anything done by Iggy Azalea or the end of Britney Spears career. You go into it knowing that you’re pandering to people. That’s right. You’re pandering to the basest impulses of humans. It just so happens we all share those impulses. We want to dance. We like familiarity. Isn’t that why Marvel literally owns the movies right now? But then there is the definition of straight up musical gentrification. And that’s what Macklemore’s horrid, horrible, terrible new song “Downtown” is. It’s the equivalent of waking up to seeing all your neighbors pushed out by ruthless landlords jacking up rents just to make room for cupcake shops. And the worst of it is that it will be a hit.

It will be a hit because Macklemore indulges constantly and without remorse in the seedy underbelly of music making. That if you just give the people what they want ( more dancing! more familiarity!) and eschew any real kind of originality or creativity at all that you can — if you’re willing to go far enough — create a hit. It’s a sort of devil’s bargain that you make with the public. That you’ll always, always give us (whoever you’re pandering to, that is) what we really desire. To not think. To not even really feel. “Downtown” is just that in its most putrid, most flaming bag-of-shit form. I wonder if he texted Kendrick before this one, too.

The God-damned thing has everything. It has the jazzy “King Kunta” stuff at the beginning when he’s rapping like a pseudo-Kendrick. And then he just moves down the list. He bites his very own “Thrift Shop” when he’s in and out of a moped shop. Is he making fun of Hipsters or is he one? It doesn’t matter. Then the old school stuff with Grandmaster Caz, Kool Moe Dee, and Melly Mell. It’s completely derivative. He has them in the video, and you can say that he was trying to introduce a young audience to the old-school greats, but Nah. Instead,  it feels like it was just another check on his “How To Make A Platinum Single” checklist. He probably still uses checklists he’s so ridiculous. Use Wunderlist like everyone else.

It’s not over, though. The song degenerates even further into this completely nonsensical smorgasbord of complete nonsense. Eric Nally sings his ass off as he leads a foursome of Harley’s down a blocked off street of musical despair. “Uptown Funk” is what he’s biting now, and he bites it with gusto. Yes, he bites a song that bit like fifteen other songs! And as the death march becomes more and more like jerking off to Golden Girls the cowbell flops in for a bigger visit. I never thought I’d actually get the chance to use this, but, no more cowbell! This song is already playing on radio Disney. And when it reaches the top of the charts — and it will — another piece of my belief in humanity will die inside.

It’s not just that this song is a straight jack of every single thing that came out this year in Hip Hop. From the jazzy riffs of TPAB to the unbridled positivity of Surf, but it also attempts to jack the pop song that jacked Trinidad James’s “All Gold Everything.” The only thing it doesn’t attempt to rip off is Trap. Which is great, because then this would officially be the worst song of all-time.

Look, I’m all for cultural appropriation and all that shit, but this kind of everything-and-the-kitchen-sink, paint by number pop-rap crap is so egregious it should be buried under the Internet, never to be seen again. Macklemore’s win at the Grammy awards over K. Dot’s masterpiece looks even worse, now, as we now have to tolerate this guy and his fur vests for years upon years to come. I, for one, bow out now. From this to his battles with weed, Macklemore continues to pander and pander and pander to everyone who cares about these sorts of worn out tropes. His problems feel like paper machete cutouts of actual distress, and now his music does, too.

P.S. Ryan Lewis, get out while you still can.