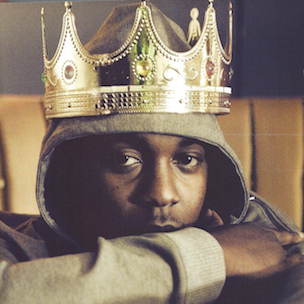 We’d been hearing about this one for months. Back in November Scott Veneer (Music Director for HBO) said there was this track, “King Kunta,” that was going to melt our faces off. We waited. He said Pharrell called it “unapologetically black and amazing” and we waited. We all got a firm slap on the wrist from TDE’s Ret One like would you fools wait for it and not have me snatch you out of this computer screen? We waited some more. Then “The Blacker The Berry” came out and it was a strong-arming like 90s Knicks defense (not to be confused with the porous, matador “D” that reigns today) and we wondered if this was the one they were all talking about.

Then this surprise leaked out of nowhere yesterday and it was funky-as-hell and with a similar DNA to the general feel of the seemingly angry Kendrick of only a song ago. DJ Quik is rumored to be behind the boards though that hasn’t been confirmed, and we needed to talk about it because we’re only human. So, join us as we give our first impression of the very different sounding track from young K. Dot.

So does “King Kunta” Weigh In As Good As Advertised?

Andre: “King Kunta” is a simple baseline working double, no triple time in a shiny funkadelic hall-of-mirrors. I imagine K. Dot in that studio with Clinton first name George and Pharrell screaming “one more gunshot!” from the back of the room. I imagine he ran out into the street and asked some lucky undine if she wanted to make history by jolting onto the record “We want the funk!” I’m impressed, and this album is shaping up to be a kaleidoscope of how many ways Kendrick can show his anger. He calls out ghostwriters, drops references to Richard Pryor, say’s he was going to kill a couple rappers but they did it to themselves. Drops a fairly rudimentary double entendre when he starts comparing bars to prison bars but you forgive him because the imagery of a guy on the bottom bunk having to write your rhymes is legendary. And there’s all kinds of bars out there, and then you remember that album art — all the homies lined up and cheesing on the lawn of the White House, a judge cartoonishly laid out with X’s over his eyes — and you remember that you weren’t supposed to make it past 25 either.

This is cultural commentary in the best way possible. This is art. I’m not talking songs with a message because that’s cool and that’s amazing. There’ve been protest songs that lift you up into a spirit of the age. There’s Dead Prez, Talib Kweli, Yasiin Bey, Public Enemy and N.W.A and Brother Ali, and so many more. There are a ton of amazing albums flatly addressing a whole host of cultural maladies over the years and they’re art too. The voice is a powerful entity in the world. Speaking is powerful. But so is dishing out your rage in angry spoonful’s. Furious, carefully arranged pieces, moments decked out over synthesizers and lush strings. It’s the reason why somehow you dance to ‘Pac’s “Fuck The World.” I mean, of course. The song isn’t perfect, but it doesn’t have to be. This isn’t what Kanye was trying to do on MBDTF or anything. This ain’t supposed to be a perfect album of perfect songs, it’s supposed to be a perfect album of imperfect, Hulk-smash moments. What it looks to be shaping up to being is nuanced and raucous and two-and-a-half years well spent. Now if we can just get an interview I can die happy. The 23rd can’t come soon enough.

Ural: Kendrick Lamar is playing some fun mind games around notions of what people expect from him nearly two weeks away from To Pimp A Butterfly. First, the safe (and Grammy Award winning) “i,” hyper militant “The Blacker The Berry”  and now “King Kunta”s two-step funk makes a holy trifecta of singles that insure K Dot’s Good Kid m.A.A.d City follow-up everything Hip Hop fans desire. When Pharrell called the track “unapologetically black and amazing,” many assumed just lyrically. However, it’s more. “King Kunta” harkens back to a time when black music was less concerned about commercial appeal and more occupied with making something for a people who weren’t accepted creatively or generally. The West Coast back yard boogie sounds like neo G-Funk, which makes total sense considering his current obsession with Miles Davis and Parliament. Then again, there was news last year that Lamar was in the studio with George Clinton himself.

There’s an unorthodox structure to “King Kunta” that looks back to Clinton’s signature call-and-response style with Lamar’s lazer sharp delivery. Hell, even the female chant of “We Want The Funk” is slick enough to add one hundred more head nods. This isn’t for the club, this isn’t for radio, it’s for To Pimp A Butterfly. Right now, there are probably some BBQs in Los Angeles County today that’ll have this in rotation all night. The reason? The reason is because “King Kunta” is the most West Coast sounding Lamar track in forever. Most importantly, from the three singles heard, it looks like he’s finally developed his own sound. Good Kid m.A.A.D. City received classic accolades due to the TDE flagship artist’s bars and thematic concepts alone.  This time, Lamar is sonically differentiating himself from his other peers more concerned with DJ Mustard and Mike WiLL Made It production. This may make To Pimp A Butterfly a totally beast all together which is the smartest move he could make considering the album’s anticipation.

And yes, he should probably run for mayor of Compton. Wouldn’t be too far of a stretch considering Aja Brown is the city’s current youngest at 31-years-old.