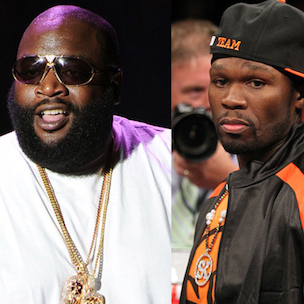 With the culmination of this most recent lawsuit and the fact that Fif’ is being forced to pay Lastonia Leviston $5 Million dollars for his part in her sex tape leaking as well as now filing for bankruptcy means that it has become official: 50 Cent has lost his battle with Rick Ross. It’s over. Now we can all go home.

50 Cent’s agitation of Ricky Rozay has served as one of Hip Hop’s longest running jokes. It was right up there with the prospect of Detox somehow leaking and finding Tupac alive smoking cigars in Cuba. How many nights have we all gone back and watched those “Officer Ricky” videos and laughed and laughed when everything seemed lost? Cheer is a powerful force.

It was a good time to be a rap fan and a human with the ability to guffaw when this beef came out of nowhere in 2009. Some say it started when 50 looked at Ross wrong at the BET awards. But all of us who are discerning saw the smoke rage into a fire when Ross said on “Mafia Music,” “I love to pay ya bills, can’t wait to pay your rent / Curtis Jackson baby mama, I ain’t askin’ for a cent / Burn the house down nigga, you gotta buy another / Don’t forget the gas can, jealous stupid motherfucker…” That came in the wake of the mother of 50 Cent’s child, Shaniqua Tompkins, fleeing her burning Long Island home. The gloves came off at that point, with 50 Cent first releasing “Try Me” and then continuing the onslaught by posting an interview on Thisis50.com where he gets Tia Kemp (Ross’s Baby’s Mother) to confirm the fact that Rick Ross was, indeed, a corrections officer.

The hilarity then went viral, as “Officer Ricky” came into the Hip Hop imagination. The videos were classic rubs at Ricky’s fable of being a drug kingpin who became a rapper. They featured Rick, who in reality is a kind of mastermind, as a dullard double agent fibbing his way through life. It was funny. And we all needed to laugh at the time. It was the end of the decade, and we were all left with a “WTF” taste in our mouths. Unbeknownst to us all, Kanye would soon be sent into the rap desert because of young, porcelain looking Taylor Swift, Hennessy and the MTV awards. For some, this beef was all we had.

2009 was a rough year. The best album was arguably a mixtape in Drake’s So Far Gone. Sure, there were Rae’s OBFCLII and Em’s Relapse, but come on, the spotlight was on these two. It was a perfect showdown. A real gangster shot 9 times and come back to life against a person who took Hip Hop’s propensity for adorning fiction to new heights. Here’s the thing, even then it didn’t quite work out for 50. They released Deeper Than Rap and Before I Self Destruct that year, and while both albums had their strong tracks, they both also didn’t live up to the hype of the beef. To be fair, by all intents and purposes, Rick Ross won that beef simply because he survived. Perhaps he’s lucky he didn’t get Fifty at his most vitriolic, as Ja Rule had the misfortune of running headlong into that 50 and, well, the rest is history. Then the release of the sex tape and of “Pimpin’ Curly.” ‘My God, 50,’ we all thought. ‘You’ve gone hilariously too far.’

For most of us, the lack of output caused the beef to fizzle. But it was, like a trusty Labrador retriever, always there for us when we needed it. At times, it would flare up. Like last year when 50 cut that photo to make it look like Ross and Puff Daddy were about to lip lock. Of course, just like high school, making fun of people publicly has real life consequences. Ms. Leviston filed a lawsuit against Mr. Jackson alleging that she was driven to the brink of suicide by the lambasting she took in the video. That’s understandable, and now this beef is more than dead. Now, not only is she owed $5 Million dollars, but also 50 Cent is filing for bankruptcy to protect the rest of his assets. He’s a smart, smart man. That sound you hear is this episode being nailed shut, and a little bit of laughter being sucked out of the whole wide world.

*This beef is survived by both 50 Cent’s and Rick Ross’s extremely successful careers, G-Unit, Wingstop, pears, and Lastonia Leviston.*