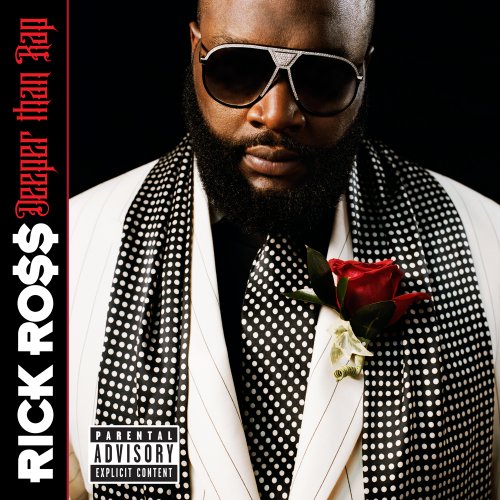 [click to read] has managed to force himself into the collective consciousness of
Hip Hop fans, successfully branding himself as “the real deal,”
despite events that would seem to indicate otherwise. But for all the
inconsistencies in Ross‘ tales of pushing weight, he’s
always managed to deliver in the music-making department. Deeper
Than Rap is no different, as “the Boss” continues his
penchant for combining hard-hitting production with some good
old-fashioned hedonistic Rap.

The number one expectation when listening to a Rick Ross album lies with the production, and in this aspect, Deeper Than Rap does not
disappoint. The majority of the sound here is very rich without
sounding overproduced and shiny. Whether listening to the
minimalistic claps over heavy organs in “Mafia Music” or
the swanky yet defiant keys and horns in “Yacht Club,”
there’s little to complain in the musical department. Still,
there’s definitely some fluff, particularly when Ross relies
on R&B tracks. The “All I Really Want” is far too
shiny and the same can be said of “Lay Back.” To its
credit, the former has an infectious hook courtesy of The-Dream,
while the latter may be the worst of Robin Thicke‘s
[click to read] career.

Immediately evident, even more so than the stellar production, is Ross‘
vastly improved emceeing. Big Daddy Kane
[click to read] he ain’t,
but no longer is Ross simply talking over tracks. While his
flows aren’t complicated or astonishing in the least, they are
clean and he rides the beat well. Perhaps it’s a testament to
how bad his prior technical abilities were rather than his current
ones are; either way, he’s definitely gotten better. One need
look no further than “Mafia Music”
[click to read]
where Ross confidently rhymes, “That boy had it hard,
no facade it’s the truth/So now when I ménage and get
massaged it’s the proof/Proof’s in the pudding and that
baking soda takin’/Paper dat I’m makin’ gotta take
them photos naked/Listenin’ to niggas like whistlin’ at
Wendy Williams/I flip my middle finger, I’m chillin on
twenty million/The rumors turn me on I’m masturbating at the
top/These hoes so excited so they catchin’ every drop/I’m
dodging debacles like pot holes in Jamaica/We cut down the weed, bury
the paper on them acres/Martin had a dream, Bob got
high/I still do both but somehow I got by.“

While Rick Ross
can’t keep the topic of cocaine interesting for nearly as
long as artists like The Clipse
[click to read],
Raekwon [click to read] or
Jay-Z [click to read], and
songs like “Rich Off Cocaine” are painfully monotonous,
nothing is worse than his insistence to rap about sex for a sizable
portion of the album. While it would be unfair to accuse Rick Ross
of trying to appeal to everyone, his reach definitely surpasses
his grasp on these tracks. On “All I Really Want,” Ross
delivers laughable lines like “Who can hit it more
faster/I’m talking authentic orgasms…/She said life is a
journey/I need mine just like my attorney.” And what’s
the point of “Face?” It’s “Getting’
Some Head” part two. The only purpose songs like these serve
are to make the otherwise commonplace subject matter of drugs and
violence more interesting.

While Rick Ross’ third outing could benefit from fewer R&B tracks, there’s no denying his choice in production or his improved writing. Solid
guest spots from Nas, John Legend and Kanye also
contribute to what ends up being an extremely solid album. Similar to
fellow rappers The Game
[click to read] and Young Jeezy
[click to read],
Ross continues to develop a reputation for being able to put
together a complete product – despite repetitive subject
matter. So no, there’s not much depth to Deeper than Rap,
but that doesn’t supersede its impressive execution.