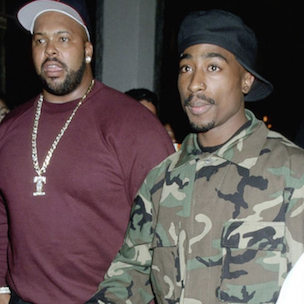 The Death Of Tupac Shakur

Andre: In a piece by Jeff Weiss writing for Vice, he outlines seven theories that could be responsible for the death of Tupac Shakur. None is more interesting or plausible — according to Weiss than the “Russell Poole theory.” This one’s a doozy. It involves multiple people and a narrative straight out of some kind of L.A. noir tale. You’ve got the hard-boiled LAPD detective (Russell Poole), the marks (Tupac and Suge Knight), the informant (Malcolm Patton), the crazy conspirators (Sharitha Knight and Reggie Wright Jr., head of Death Row Security), the curious investigative journalist (Chris Blatchford), the fallen star (Chuck Phillips), and a Shakespearean plot to steal Death Row and pocket millions in the process.

As the story goes, Patton dictated the note that would implicate him to the sister of Robert Soria. In the letter he claims that he and his brother Danny, along with Donald Smith (with information about ‘Pac’s and Knight’s whereabouts supplied by Reggie Wright Jr.) carried out the murder for the deft tag team of Reggie and Sharitha. The craziest part involves Lil ½ dead, the crip and alleged fourth gunman who wanted to take revenge because ‘Pac allegedly stole “Brenda’s Got A Baby” from the youngster in 1991.This one’s very, very far-fetched, but that’s what legends are about right?

Ural: Anyone interested in finding out the systemic motivations for the death of Tupac Shakur should read The FBI War on Tupac Shakur and Black Leaders: U.S. Intelligence’s Murderous Targeting of Tupac, MLK, Malcolm, Panthers, Hendrix, Marley, Rappers and Linked Ethnic Leftists by civil rights activist and author John Potash. What the book does is use FBI documentation to link the assassination of Tupac with Cointelpro’s attempt in stopping Black Nationalism plus various leftist movements. Putting things in perspective, there are even who view Death Row’s last flagship artist as a fake gangbanger who didn’t join the bloods until he turned 23-years-old. Then there are various voice mails, letters, poems unreleased vocal tracks (to this day) and everything else in-between. Hell, former political legend Delores Tucker called Tupac everything wrong with Hip Hop regardless of his ties to The Black Panthers. Various people viewed the slain icon in many ways. There are so many theories why Tupac was murdered that a central explanation is literally impossible. However, there may be truth in every account. Maybe they intersect in some way, but even that leads to even more questions. This is why artists and the general public look at Tupac at from so many disparate and intriguing angles. Shoot, in an interview DX just did with Gobi Rahimi the man told us Tupac was a prophet whose wings just quite weren’t able to get him off the ground before his death.

Did Aaliyah Cause The Bad Blood That Broke Up Roc-a-Fella Records?

Andre: In a 2014 interview I had with Choke No Joke, the former Roc-a-Fella videographer, he stated in muffled tones that if you look at the starlet both Jay and Dame were hanging with at the time you could infer who helped cause the bad blood between the two. I wasn’t the only one he told that to. In an interview with Hip Hop Weekly he made it even clearer by stating, “Both Jay and Dame was involved with a certain R&B singer, who I’m not gonna say her name out of respect ’cause she ain’t around to defend herself, but I believe that was a part of the initial friction.”

“I was seeing Jay with her back around 2000, then Dame was with her after. All you have to do is look at the movie they did, Death of a Dynasty. In the movie, they were fighting over a model. In real life, she was a model, but singing is what she was known for first.”

He also stated that if you went back and listened to Jay’s mixtapes at the close of the Roc-a-Fella chapter then the evidence that he was going to leave was right there, clear as day. You guys can go do that like I did if you want to in order to draw your own conclusions. Of course, Aaliyah and Dame were on the road to marriage before she died in a tragic plane crash. There’s also no doubt that the beauty and R&B star was beloved by everyone, as she left an indelible mark on the R&B landscape. There’s absolutely no evidence about this one sans hearsay, though. So it seems this will continue to remain a mystery.

The Illuminati Controls The Music Industry

Andre: The Illumi or Illuminati, as the shadowy group has come to be known, have been a constant fascination of Hip Hop artists and fans for at least 20 years now. In an article by HipHopDX, we shone the spotlight on a particularly interesting exchange in the 1995 issue of Vibe magazine involving the Wu-Tang Clan.

Raekwon: “Were just building and keepin’ shit together, you know? This is Born Power hour. The Clan got shit locked down for the next five years. Right now, we’re preparing for the Illuminati 2000, which is the Masons’ plan for New World Order. We got a videotape of these mothafuckas droppin’ all types of shit about how they plan to run shit in the year 2000 and better.

[At this point Golden Arms, a.k.a. U-God, who has seemed anxious at the turn in conversation, looks up from his lap and shakes his head in unquestionable agreement.]

U-God: Word life, yo! This shit ain’t no joke! These mothafuckas got plans to put microchip implants in babies, so that they can be able to find yo’ ass wherever you are! Yo! They’re gonna give everybody plastic credit cards to replace money. We tellin’ you the truth, son. It’s gonna be some shit!

Raekwon: Brothers don’t realize these are the last days. That’s why we so tightly knit. We gotta blow this shit up now, or else we ain’t gonna have another chance. When you really think—yo—this whole world is corrupted to an extent…everything! Illuminati is a belief, but at the same time, it’s no religion. We dealin’ with facts, just like we dealing with the planets and all that. It’s deep.

Chef: Word up, ‘cause this shit can get niggas killed, for real. Let’s stop here.

That the conversation even took place is crazy enough, but that it took place in a major publication at the height of the Golden Age puts it somewhere between Venus and Mars. But the Clan hasn’t been the only ones to tackle freemasonry and the Illuminati in their lyrics. Whether they’re crushing the idea like Bun B’s line “fuck the illuminati / only secret society is Rap-A-Lot and John Gotti” or Jigga complaining that folks just can’t believe a black man could do all he’s done without some supernatural help, the idea is a strong one. Of course, there’s the Illuminati talk from Mobb Deep’s Prodigy, whose line “the Illuminati want my mind, soul, and my body” sent a rush of blood to all of our heads.

Then, there is Jay, whose whole career seems to swirl in shadow. Of course, there was also the letter. It’s got to be a hoax, but it had everyone talking about it for a time. I won’t link to it here, but it basically states that there was a conscious effort on the part of monied interests to promote and make cool the more violent elements of Gangsta rap in order to make money off black people going to prison. This is bone-chilling stuff, indeed. But anyone who has heard of Cointelpro, medical apartheid, the 13 presidents before George Washington or any of the other kinds of forgotten histories will no doubt continue to argue this until kingdom come.

Andre: Last year, wearing a Bompton sweat shirt and smoking a cigar into the lens of a TMZ cameraman, Suge quipped that Puffy knows he didn’t kill Tupac because ‘Pac was still alive in Cuba somewhere. Then, the CIA tweeted that they didn’t know where ‘Pac was, inciting an angry response in the righteous cross-section between Hip Hop fans, black Twitter, and Don Killuminati fans. This one is as old as Hip Hop at this point. And there are a number of theories that folks who are inclined to engage in that stuff say conclusively point to Tupac being alive. The answer, of course, is who knows? But there are breadcrumbs if you’re willing to follow them.

The Machinations Of Cash Money Records

Ural: Considering the amount of lawsuits, departures and internal beefs, it seems Cash Money Records has a clusterfucked accounting office. Equally fascinating considering how long the label has survived. Just think about it, the New Orleans-based label outlived everything from Rawkus to No Limit yet, can’t keep artists signed happy. It was unprecedented when Cash Money signed that $30 million contract with Universal that left them taking 80 percent of profits. A label with that money shouldn’t have trouble keeping artists satisfied, but let BG, Juvenile or Turk tell it, their contracts were signed on toilet paper and one handshake. Those issues persist with Lil Wayne’s current situation turning like a leaf in the wind.

These are problems that are fairly normal with labels that can’t balance the streets and boardrooms. Every time a document regarding Cash Money’s legal issues hits the net, the terms accepted are confusing. How was Weezy convinced to make Cash Money the majority owner of Young Money? Why did Jaz Prince have to sue for money owed in his cultivation of Drake’s career? There are many questions of what’s kept the label afloat for so long. Now, those little holes may sink Cash Money’s ship.