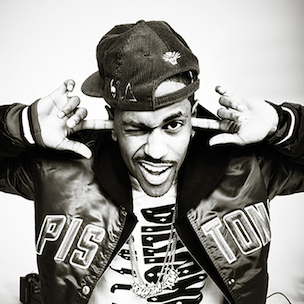 As such, we’re reserving this space for a weekly reaction to Hip Hop’s current events. Or whatever else we deem worthy. And the “we” in question is myself, Andre Grant and Ural Garrett. Collectively we serve as HipHopDX’s Features Staff. Aside from tackling stray topics, we may invite artists and other personalities in Hip Hop to join the conversation. Without further delay, here’s this week’s “Stray Shots.”

Ural: There hasn’t been an original artist on G.O.O.D. Music since John Legend who has had the most potential for mainstream success than Big Sean himself. While Legend has gone to mark his stamp in R&B history, Sean’s push forward within Hip Hop has been a slow creep. Regardless, it’s still progress. Up until last year, he was technically somewhat of a one-hit wonder who couldn’t reach the heights of his 2011 hit “Dance(A$$)” and its subsequent remix with Nicki Minaj. Sure, Cruel Summer features “Mercy” and “Clique” were great singles but Sean always felt like a better passenger than driver.

Outside of “IDFWU,” the other four tracks released on that fateful day in September  “Paradise,” “4th Quarter” and “Jit/Juke,” didn’t really set the world on fire much. Part of being at the one percent roundtable means being able to stand on their own. If Big Sean doesn’t have the perfected song crafting ability of Drake, spazztic pop sensibilities of Nicki Minaj or forward traditionalism in Kendrick Lamar, what exactly does he have? Sean’s “All Me” guest verse didn’t make 2 Chainz’s, let alone Drakes, “Dance (A$$)” singlehandedly benefited from Minaj’s 2011 feature streak and K.Dot’s “Control” verse has etched itself within Hip Hop’s history books. Despite “Blessings” featuring Drake and the seconds after remix release with Kanye West being a banger, the only thing holding him back is a classic(or close to) body of work. Which means the real test comes in DarkSkyParadise. If reception and sales can match those peers mentioned above, the conversation of Big Sean being considered one of the greats may be valid. Until then, watching him grow is becoming something interesting to watch.

Andre: Big Sean is approaching a tipping point. His third studio album is quickly approaching, and Sean is putting out the best music of his career. Can he, then, finally join his ‘09 Draft class brethren along the top rung of Hip Hop? Or is he destined to be the perpetual runner up, never quite gelling in such a way that cements his position. His journey has been filled with very high high’s albeit relatively quietly. “Dance (A$$)” peaked in the top 10 of the Billboard Hot 100, and “IDFWU” wound up at number 11. But he’s probably more well known for the things he’s given away: The supa-dupa-flow, the ad-libs, his ex-girlfriend Naya Rivera, “Control.” His peers always seem to outpace him, somehow. Drake burst out of the gate with hit after hit, while Sean’s presence remained hot to the touch but without a glow. Nicki flew headlong into whichever direction she chose, and Finally Famous, while peaking at number 3 on the Billboard 200, seemed to do so with a trickle. It’s odd. The man’s really, really successful and yet he’s perpetually overlooked.

His third effort seems to be shaping up to be his most cohesive and aggressive, however. And he’s also had the benefit of a focused Kanye West (the man hasn’t smiled in 20 fortnights) along with a slew of creative guest stars (Jhene Aiko, Drake, PARTYNEXTDOOR) and top notch producers. Whatever the case, this is the most highly anticipated album for me from Sean since his debut, and I think it may have the effect of putting Sean in the elite emcee conversation from here on out.

Andre: Suge Knight struck his friend with his car in an altercation that took place on the set of the Straight Out Of Compton biopic, and he’ll have to live with it for the rest of his life. He’s got to live with other things as well. The man is a well of secrets, and his dead sea scrolls are the things million dollar memoirs are made of. This, though, is nothing short of a tragedy. When anyone dies things become hyper real. What’s realer than mortality, right? And there is something to be said about this happening on the set of a film from an era when Hip Hop was plagued with violence.

This group is too important, too iconic to be hamstrung by this singular event. But Suge flirted with prison stints all of last year after the camera breaking stuff. He also said Tupac was alive somewhere, and like, what? This may be the close of this man’s life, though.

It’s a shame. Suge was a brilliant strategist with a keen eye and ear for talent. Deathrow still is one of the most important labels in the history of Hip Hop, but he never seemed able to leave the tactics that made him so menacing in the 90s, and that may be his ultimate downfall. Still, rest in peace to Mr. Terry Carter. We truly wish it was not this way.

Ural: This may be the proverbial straw that broke the camel’s back for Suge Knight. After years of prison stints, altercations and even shootouts, the former Death Row head may be finally heading to jail for a really, really long time. Making matters worse is that the supposedly avoidable situation ended the life of someone he considered a friend.

While Knight may forever be known as a notorious figure in Hip Hop history, there’s no doubt both label exec side and street side were both a blessing and curse.