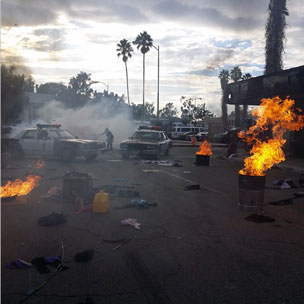 This week, DJ Premier stops by Shady Records and Wale and his hero Jerry Seinfeld are caught working together at the studio on Wale’s upcoming album. Check the rest of the week’s top Instagram posts below.

Nicki Minaj & Beyonce “On The Run” In Paris

So did Nicki Minaj just decide to pop up in Paris during Jay Z and Beyonce’s “On The Run” tour and later, just decide to step on to the stage to perform the “Flawless” remix for the first time in front of the French crowd and everyone in the world. The reality is it wasn’t random at all. Nicki and Bey’s first ever performance of the remix was filmed for the Carters’ “On The Run” HBO special, which will be airing September 20. If you weren’t in Paris this weekend, don’t be sad. There’s always HBO. Caption: “The QUEEN, could never thank you enough.”

Wale & Jerry Seinfeld In The Studio

We discovered that Jerry Seinfeld would be working on Wale’s The Album About Nothing back in 2013. Little did Jerry know when he first met the emcee, that Wale had two full projects, The Mixtape About Nothing and More About Nothing, inspired by Seinfeld. Now, we see them side by side in the studio “cooking up” something special in the next Seinfeld-inspired About Nothing installment. Check out the new album trailer, here. Caption: “Cooking up! #TAAN #EBM.”

Talk about exposing your daughters to role model women. Tennis player (and the one who sparked beef between un-scrappy rappers Common and Drake) Serena Williams took home her 18th Grand Slam win at the 2014 US Open and still had enough energy to pose for a quick picture with 2 Chainz and his daughters. That winner’s high must keep you energized forever, at least until her 19th win. Caption: “Me and my daughter’s along with the the winner of the 2014 US OPEN @Serena Williams .. congrats.”

No one can make fun of Drake better than Drake. It seems like he’s accepted his fate and goes along with posting memes of himself and basks in the spotlight. While Drake tears have been around for a while, it looks like Drake will really be getting emotional in 2015. Perhaps Views From The 6 will be an emotional album? Caption: “Drake Tears For Sale 2015.”

“Glad to be apart of the Roc. And we still GOOD,” Big Sean clarified after it was announced that he signed with Jay Z’s Roc Nation. News (and confusion) broke earlier this week that Big Sean was signed to a management deal with Roc Nation, while still being signed as a recording artist with G.O.O.D. Music. The best part of all this is that to celebrate, Big Sean released four free tracks for his fans. One of the freebies is a DJ Mustard and Kanye West-produced track titled “I Don’t Fuck With You,” where the Detriot rapper lets all of his post-Naya Rivera anger out with a hilarious/angry/rawr hook. Listen to it, here. Caption: “Welcome to the Roc Nation family @bigsean.”

In honor of 9-11, N.O.R.E. posted a picture of New York City and paid his respects to the concrete jungle that was in mourning on Thursday. The emcee was one of many rappers, along with Lil Wayne, DJ Quik and Immortal Technique, who paid respect to the lives that were lost through social media. Caption: “”#911 never forget zoo York city still stand strong salute respect and rip to those who we lost!!!!”

DJ Premier stopped by Shady Records and was captured on the label’s official Instagram account. The producer and the label have worked together in the past as he’s produced several records for Slaughterhouse’s Royce Da 5’9. Shady Records is currently prepping its upcoming SHADYXV compilation album, which will feature Slaughterhouse, Yelawolf and D-12, and release on November 28. Caption: “Look who stopped by Shady today with gifts for all. @djpremier.”

After an extensive Google search and lightly lurking on Reddit, it can be confirmed that this shot was taken sometime during the filming of the N.W.A. biopic Straight Outta Compton. Reddit user MPGrdnr wrote “Oh so thaaaaaaaaats what they were doing yesterday.I live right by the street they filmed on, this caused a lot of traffic, I thought it was real when i first saw it.” The scene is a recreation of the 1992 L.A. Riots for which N.W.A.’s “Fuck The Police” was dubbed its unofficial soundtrack. Caption: “1992 LA Riot. No justice. No Peace. #straightouttacompton the movie Aug. 2015.”

Like it was possible for Swizz Beatz to fall in love with Alicia Keys any harder. Well, she may have just found a way. Alicia Keys threw her husband an extravagant birthday party themed after a cult classic, the 1988 comedy Coming To America. Along with celebrity friends who attended the event, the party also included real-life references plucked straight out of the movie like a rose bearer and a recreation of the Paula Abdul-choreographed dance scene. Of course, Swizz played the role of Prince Akeem and sat in his throne while his Alicia, who’s expecting their second child, performed. For more pictures, click here. Caption: “My wife is the best 1of 1 look at my Dad , Mom , Gmom. Wow #kings & #Queens #myfam #bdayvibes #virgoseason #comingtoamerica #party thx my love @gradyspivey #kingDre.”

After calling him a “piece of shit” and a “rat,” Mike Tyson clearly wasn’t too happy with Nathan Downer, the journalist who interviewed him live on Canada’s CP24. Downer casually asked him if him being a convicted rapist and endorsing him would hurt Toronto mayor Rob Ford’s chances for reelection. Touchy subject for the boxer who was sentenced to a six-year prison term in ’92 after being convicted of rape. 50 Cent was amused by Mike Tyson’s reaction. Caption: “Lol I feel the same way sometimes mike #dontaskmenodumbshit lmao.”