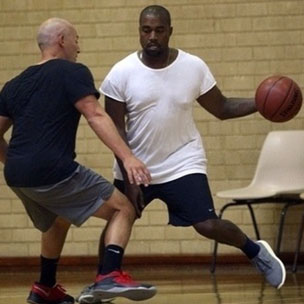 This week, Young Thug calls Birdman his “lover” and Papoose continues to shower his wife, Remy Ma, with love through picture posts on his personal account. Check the rest of the week’s top Instagram posts below.

Kanye Balls It Up In Australia

Kanye West took a little time to squeeze in a basketball workout at the Leisure Life Centre, according to The West Australian. ‘Ye, along with wife Kim Kardashian and daughter North, were in Perth, Australia for the first stop of the Australian leg of the “Yeezus” tour. According to the publication, the G.O.O.D. Music leader “worked up a sweat playing off against his entourage including support act, Pusha T.” Apparently, the elderly ladies lifting light kettlebells didn’t mind sharing their gym with a Grammy winner since they “didn’t appear to recognize” him. Caption: “Kanye playing basketball in a gym in Perth, Australia.”

Twerking for love and twerking for your husband’s #1 album is pretty much the same thing. In honor of Wiz Khalifa’s Blacc Hollywood hitting the top spot on the Billboard charts, Amber Rose put on her best blue cotton one-piece, strategically placed a pop-art portrait of Wiz in front of her and proceeded to drop it like it’s hot as a ratchet offering to her beau. Caption: “In honor of my Hubby’s #1 Album #blacchollywood #AssDrop .”

Remy Ma and Papoose were separated by metal bars for six years, while Remy served a sentence at the Bedford Hills Correctional Facility for Women for shooting friend over a missing $3000. Since the former Terror Squad emcee’s release in August, Papoose has not been shy showing off his wife at every chance on Instagram and it’s been adorable. Caption: “U can’t tell a woman u love her are u stupid words don’t express ya love u gotta prove it.”

The first day of football is an American holiday. Pharrell was there for the celebration and performed at the NFL Kickoff 2014 at Seattle’s CenturyLink Field, which hosted the season’s first NFL game between the Seattle Seahawks and the Green Bay Packers. The rapper-and-producer performed his hits, “Happy” and “Come Get It Bae” (sans Miley Cyrus), and showed off a new high hat. Caption: “Pharrell #NERD #rockstar #hitmachine #seahawks #seattle #kickoff2014 #thismyshit #pharrell #freeshow #nfl.”

Television host and comedian Joan Rivers passed away Thursday, September 4, at the age of 81. After news broke of her death, the famous comic was celebrated by several rappers including Tony Yayo, Ja Rule and 50 Cent. Fiddy posted a collage featuring the late media maven (one of the pictures showed him giving Joan a kiss on the cheek) on Instagram. Caption: “R.I.P to one of the funniest women to have ever lived Joan Rivers. God Bless.”

For his weekly vintage post (better known as Throwback Thursday), Ludacris posted a picture of Tyrese, Paul Walker and him on the set of 2 Fast 2 Furious. The second film in the Fast & Furious franchise doubled up to be the first main role in a film for Luda, who played Tej Parker. He went on to star in four Fast & Furious films with the late actor Paul Walker. Caption: “#tbt 2Fast2furious R.I.P. @paulwalker.”

G-Unit’s been making their promotional rounds and stopped by Hot 97’s “Ebro In The Morning” show to discuss their reunion, why Game was missing, new music and more. According to the interview, it only took one phone call to reunite the members. When asked about Game, Tony Yayo said, “My view of the industry is there’s a lot of snakes in it. The Game is a snake that won.” It’s safe to say that we won’t be getting a G-Unit feature on Game’s The Documentary 2. Caption: “@ebroski @laurastylez @rosenberg @hot97 morning show good interview..”

Jeezy Donates $1 Million For A Scholarship

While attention was focused on his recent arrest, Jeezy still took time to give back to the community. In a picture post, the emcee was shown holding up a check worth $1 million made out to the Jay Morrison Academy on behalf of his charity Street Dreamz Foundation. Caption: “Street Dreamz Foundation is happy to announce that I’ll be giving away 1 Million Dollar “Another Way Out” scholarship. Visit Jeezyscholarahip.com.”

All it took was on word to put Young Thug and Birdman on the same headlines. In the video posted on Instagram of Young Thug and Birdman shaking hands at a concert, Young Thug wrote “lover” in reference to Birdman. According to HipHopDX, the post came after the emcee posted an image of a “since-deleted MediaTakeout story claiming Young Thug was ‘gay bashing’ and had threatened to ‘shoot a popular Atlanta transgender.'” Caption: “Me and my lover dripping!!! Like always!!! @birdman5star fuck with me fool…. VIDEO BY: @ogbentley_ follow him.”

Nipsey Hussle was arrested at a clothing store in Los Angeles earlier this week and booked for “obstructing a peace officer” after LAPD went to investigate a “potential probation issue,” according to reports. Despite all the drama that happened the night before and after posting a $13,000 bail, Nipsey still made his way to his scheduled performance at L.A.’s Made In America festival. Caption: “LAPD raiding our flagship clothing store…searching it for hours to find nothing. Then Bookin me for ‘obstructing an investigation.'”