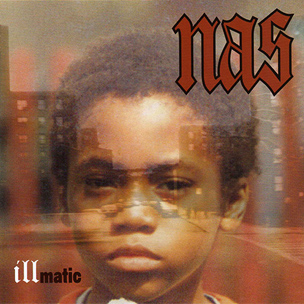 “Yo, this the big muthafuckin’ Illmatic Nas…you hear ‘The Bridge’ beat, that’s the anthem… The album’s gettin’ ready to come out in January [it was delayed until April], the name of it is Illmatic; it’s just the sciences. You know what I’m sayin’? [Bobbito Garcia asks about producers on Illmatic] You know I got Large Professor, DJ Premier, Pete Rock and Q-Tip…”

With the 20th anniversary re-release of Nas’ groundbreaking 1994 album Illmatic, it should leave little doubt as to both the timelessness and permanence of message of classic Rap as compared to classic Rock or classic Soul records. In fact, one could go as far as to say that, in embodying everything missing from modern Rap—without sounding dated or anachronistic in doing so —Illmatic could easily be the best Rap release of 2014.

Rap in 1993 and 2013 are very similar. West coast G-funk was on top in ‘93, Snoop and Dre’s insistence on making Rap’s best funk the P-funk opening a door for everything out of Cali, and the game was changed. Atlanta was the home of radio-ready hits bridging Hip Hop authenticity with Pop radio luster. Underground rappers with alternative perspectives became unlikely mainstream stars, too, as The Pharcyde hit it big. As for New York City? Transitional times had arrived, with Run-DMC and KRS-One on the outs, as the Wu-Tang Clan, Onyx and two Uptown guys named Puff and Biggie had hit the scene. Change the names to read Kendrick, DJ Mustard, MMG, Chance the Rapper, Jay Z, Joey Bada$$, Troy Ave., the Flatbush Zombies and A$AP Mob, and it’s as though nothing has changed. Therein lies the reason why Illmatic is important.

Just like a James Joyce novel, Illmatic is the portrait of a very gifted artist as a young man. Somehow, as Rap evolved vertically, Rap became Pop music, which oftentimes ages terribly and lacks permanence. Concurrent to what other New York artists have done, Nas expanded horizontally, as his style has crossed cultural borders and generations. In doing so, Nas’ sound is often able, as it does in the case of Illmatic XX, to sound soulful and forever applicable to solving Rap music and Hip Hop culture at its core.

In being less business-minded than Jay Z and more wary of mainstream acclaim than the Notorious B.I.G., Nas stayed true to his roots, and deserves—more than anyone else—to be considered the King of New York. As Rap has evolved outside the five boroughs and influenced the globe, artists like Jay and Big leading that charge were important. But, at some point they became larger than themselves, a city, and eventually Rap itself. However, Illmatic XX reminds Rap that the throne isn’t in a C-level suite in an ivory corporate tower, but on top of a stoop in Queensbridge.

Deeper Than Rap: The Higher Purpose Of Illmatic

“‘Cause yeah, we were beginners in the hood as five percenters / But something must have got in us ‘cause all of us turned to sinners…” -AZ, “Life’s A Bitch”

There was once an era in Rap music where being an intelligent hoodlum meant everything. By 1994, this was as much due to the prevailing influence (in New York Rap especially) of the Supreme Mathematics of the Five Percenter movement, as much as it dealt with Rap having emerged from an incredibly stupid era. Though Hammer and Vanilla Ice elevating/reducing the culture to a literal cartoon is certainly part of Rap’s progression, nobody said anything about these moments being part of the Five Percenter’s concept of a cypher—a circle consisting of 360 degrees (120 degrees of Knowledge, 120 degrees of Wisdom, 120 degrees of Understanding). In retrospect, Illmatic is incredibly dope because it had (and still has) a higher purpose, to elevate the art of Rap and the culture of Hip Hop back to the place where the cypher could not be reached by mortal hands.

llmatic XX smartly also features the aforementioned Stretch and Bobbito freestyle, as well as similarly unreleased track “I’m a Villain.” Yes, the quality of the bonus remixes is as high as expected, too. Hearing Sadat X and Nas on a track originally produced by Q-Tip and remixed by Godfather Don (just like hearing AZ on a mainstream album again) just makes you wonder where all of these artists are, and if mainstream labels could either a) refresh their classic material in a similar manner or b) sign them to mentor modern emcees? The addition of these extra recordings fleshes out the album’s greatest crowning achievement. In 1994, Nas was an artist wild at heart but focused in mind. As well, he was on the cusp of literally defining his legacy in just 10 tracks on his debut album.

Twenty years later, Illmatic still invites you to vigorously nod your head and listen without stopping. As well, if you listen to this album up against YG’s My Krazy Life, Rick Ross’ Mastermind, Chance the Rapper’s Acid Rap and Jay Z’s Magna Carta Holy Grail, Illmatic sounds like the piece missing from Rap’s current mainstream puzzle. Arguably crafted and executed with a level of precision and clarity of view lacking in all of the other releases combined, it stands alone. Whereas Mustard’s beats and YG’s voice make you long for Doggystyle, Chance the Rapper feels like Andre 3000 in training, and Magna Carta feels like Jay Z wandering aimlessly in a brand new house filled with too rich toys, Illmatic sounds like well, Illmatic. There’s something still relevant, refreshing and intriguing in the story of a proud kid caught in the streets wholly dependent upon his wits for survival. Yes, we’ve all seen how Nas’ story eventually turned out, but Illmatic XX makes everything feel revived, as if Nas-as-protagonist is 20 once more and has a lifetime ahead of him to tell his story once again.