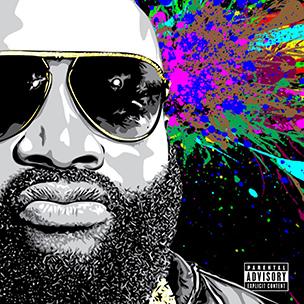 Listening to any Rick Ross record requires an overwhelmingly prodigious imagination. It also requires an innate appreciation of harmless deception; it’s a lot like being an adult at a magic show: you know it’s not really magic, but there’s something wondrous about having your perception of reality challenged. Few dare to so blatantly test the murky waters of Rap surrealism. Ross, however, does so unabashedly, and he has been pulling the same rabbit out of the hat for the better part of a decade now. He has burrowed so deep inside his feigned illusions of grandeur that he has even grown enamored with his own mystique. As Rick Ross’ career grows long in the tooth, it’s becoming harder to bank on its prescience when its context is so marred by fiction, especially as its exposition proves to be less and less interesting. Rozay’s sixth studio album, Mastermind, once again explores his heavily dramatized excursions as a drug tycoon with great depth, but it reads more insincerely than ever and his imagination has seemingly reached its limit.

Mastermind functions illogically conceptually not just because its claims are groundless but also because it lacks solidarity. The overarching premise of any given Ross album usually gives way to his grand thesis while additionally carrying its own narrative. However, in this case, while Mastermind fits like a glove into the Ross canon it doesn’t preserve its own individual identity. There isn’t a lot of diabolical criminal enterprising taking place. Instead it is simply a hodgepodge of classic Ross tropes thrown into one and tagged with a title more fit for super-villainy. Even so, it would be much more bearable—and even relatively engaging—as a fictional retelling of mythic proportions if it simply sought a bigger climax.

Despite its flaws, 2012’s God Forgives, I Don’t was Ross at his most visionary: channeling a fictional, human-skinning serial killer, placing himself at the pinnacle of urban culture side-by-side with Rap moguls Jay Z and Dr. Dre, and venturing deep into the Roman numerals for a fourth installment of the “Maybach Music” series. His eyes were bigger than his stomach. He was thinking colossally; thinking it terms of astronomical achievement. Mastermind thinks on a much smaller scale. It focuses on the immediate future. This is its undoing: it shrinks back into familiarity and seeks neither to explain itself nor to grow. It peddles its coke narrative formulaically without ambitiously pursuing unheralded heights.

Perhaps the worst instance of Mastermind’s lack of aspiration is “What A Shame,” an electro organ-backed bore which incorporates an interpolation of Wu-Tang Clan’s “Shame On A Nigga” into its mechanics. “Full magazine bitch, shoot for the stars / Snatch a nigga chain just to post it on a blog,” he raps, sounding rather pleased with himself, as if he really didn’t just suggest hitting licks as a new form of click bait wasn’t a lame idea, and this is simply a microcosm of the entire album. On “In Vein,” The Weeknd shows just how diminutive and hollow Ross’ coke lord impression has become by essentially lapping him with his own exceptional drug rhetoric—“All my niggas ‘round me getting kickback pussy / All my niggas ‘round me all be hidin’ in Stussy … Tour bus like a National Geographic / Bitches runnin’ wild getting faded in the bathroom.” If your brand is grandiose Mafioso kingpin-style drug Rap then you’d better be pitching a sonic Rayful Edmond biopic on steroids. Ross fails to deliver that.

Mastermind simply lacks flair. It doesn’t possess the pizzazz of Teflon Don, which made Ross a power player or the pure gaudiness of Rich Forever, which perfected his aesthetic. Rick Ross has seemingly run out of moves. His imagery isn’t quite as awe-inspiring as say Kanye West’s, and this truth is magnified when the two egos are juxtaposed next to one another (“Sanctified”). While Kanye is transposing himself with Muhammad Ali and washing his sins in the blood of Jesus and boldly second guessing God’s direct message the most grandiose thing Ross can muster is an ill-fated (and perhaps uninformed) comparison to fallen Waco cult leader David Koresh. It feels tired and uninspired. In truth, it is a reflection of the entire album. Though Ross’ command of his booming bass voice is entertaining in spurts—when he starts packing words together under the influence of that heavy timbre, it’s like a snowball rolling downhill building momentum—nothing about Mastermind feels fresh or creative and without much semblance of truth, there is no magic. Its themes and motifs are generic to the Ross trademark.

There isn’t anything really compelling about Rick Ross’ fictional tale anymore. It has become stale. There is no real wiggle room for his kingpin fallacy. There’s only one angle of interest left to explore: the truth. “The truth will set you free, son. The truth will set you free,” executive producer Sean “Diddy” Combs shouts smugly on “Nothing,” assumedly at opposing rappers pretending to be something they’re not. How ironic. Ross could’ve used that kind of advice himself years ago. Perhaps he’ll take heed before the next mastering.