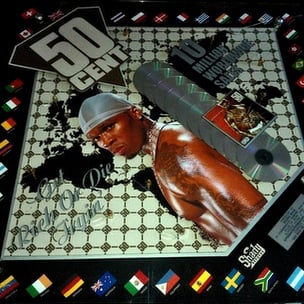 Get Rich Or Die Tryin' Ten Years Later: The Q&A

On February 11, 2003, 50 Cent was scheduled to release his official, major label debut, Get Rich Or Die Tryin’. His previous effort while signed to Columbia Records, Power Of The Dollar, was shelved and never officially released. Online leaks via various peer-to-peer file-sharing sites caused Interscope to push the release date up to February 6. It didn’t matter. Four days after its release, the album sold 872,000 copies and became the highest-selling major label debut since Nielsen SoundScan began tracking record sales in 1991. The sales kept racking up, and 50 eventually released more material via his G-Unit imprint under the Shady/Aftermath/Interscope umbrella. He also went on to score deals with Vitamin Water, Reebok, Ecko and a host of other companies. But there were a ripple of larger cultural effects stemming from the release of Get Rich Or Die Tryin’.

Through his tutelage under Jam Master Jay and Dr. Dre, 50’s name will forever be linked to both N.W.A. and Run-DMC’s legacies. From both a technical and marketing perspective, what 50 Cent and Sha Money XL did in terms of the mixtape game is still being implemented today. The way artists use beef as a promotional tool in conjunction with more marketable singles, our concept of authenticity and how we view an emcee’s endorsement deals were all at least slightly altered by events that happened after Get Rich Or Die Tryin’ was released 10 years ago today.

In part two of our 10-year anniversary retrospective (click here to read part one), a few of the album’s contributors weigh in on the historical impact of the project, and the doors it opened for them.

HipHopDX: How would you describe the opportunities that opened up for you after the critical and commercial success of Get Rich Or Die Tryin’?

Rob “Reef” Tewlow: I think some doors opened. Some people might have thought I got lucky, but I don’t care. A classic is a classic, and those things last. It led to a lot of other great opportunities, and that continues. All these years later, [50 Cent] still opens shows with [“What Up Gangsta”]. And we’re still working with each other in the capacity of his involvement here at Sirius XM Radio, where I’m the music director at the Shade 45 channel. We have a good rapport, and we can kind of look back and joke about a lot of shit. He’ll bust my balls, but that’s just part of how it goes.

Sha Money XL: People knew that I was the guy that could predict the future of this music business. I was able to see a guy before he got shot, before the hype that came with him getting shot…I stood behind him and told everybody I’ve ever encountered, “This kid is gonna sell more records than everybody and be the biggest rapper.” That’s who he became. I told everybody that without someone having to tell me, “I promise this is gonna go.” It was four years after I prophesied that when 50 became this person. So I keep that feeling in me when I meet artists. When I meet them and hear their material, that’s how I sign acts. It’s a combination of who they are and how their music is gonna impact the world. And I’m able to see that. I bet more on 50 than he was ready to bet on himself. When he told me what his predictions for himself was, mine were higher than his. That’s what no one in this music business can take from me; the fact that I know what a star needs to be before they even know. And I will help guide them to get on that plane. When that plane takes off, you might land and forget my phone number. But my contribution is to music—people come and go.

I think Get Rich Or Die Tryin’ is my biggest contribution to music from a sales point of view. It’s a brother from the hood, and his story is so representative of what you see in the streets. A lot of people don’t make it out of that. That story is something to live and grow by, and that alone is history. That’s why a movie was based on it. The story is so compelling that you can make a movie from it, even if it is loosely based on real life, with some different characters. It’s still something that was a great contribution to this world. I thank 50 for betting on me.

DX: Tell us some things you learned from working on the project.

Sha Money XL: I’d worked with Tragedy Khadafi, Cormega—all the Queens rappers. I was from Queens, so 50 started out as another one of the Queens rappers I was working with. My way was to connect to all the Queens cats, and Jam Master Jay introduced me to him. [Eminem and Dr. Dre] taught me how to save together in [Pro Tools]. Honestly, I wasn’t an engineer. I’m a producer. I was self-taught as an engineer as we were going along. As we were doing that mixtape shit on my ADAT, I knew how to make that sound good because it was on tape. If you listen to it, I had all the echo and reverb, but Pro Tools was this whole new digital beast. It took one song for me to get it right, and after that, I was rolling.

Rob “Reef” Tewlow: Being a producer takes a lot of hard work and a lot of sacrifice. It takes a lot of balls. I’ve always been multi-faceted—from working as a journalist, a record company executive and getting my chops together in producing music and learning the components of recording quality music. It’s not just making a record from a technical standpoint, but from a songwriting standpoint, which I think is more important. That’s the difference maker, and that’s the overall experience that’s shaped my individual perspective on music.

Bruce Waynne: Some people got their success from the underground stuff, moving around and getting their money. But that’s not how it started with us. [50 Cent] is like the hardest rapper on the planet. He’s still one of the most influential personalities and influential rappers with integrity in the game. But he’s sold 10 million records, and he was underground without being underground. That’s how we came in to the game—50 came in and did things the way he wanted. And we came in the same way. For us it was never really a Pop thing or an underground thing. It was like, “Yo. This is what we make, and this is what happens to it. It crosses over.”

Reflections On How 50 Cent Changed The Mixtape Game

DX: Mixtapes were a big part of signing 50 Cent to Interscope. What do you see looking back on how 50 Cent changed the mixtape game?

Rob “Reef” Tewlow: It’s really amazing to look back and realize that it’s been 10 years. You’re not going to see that again unless it’s a phenomenon like Adele…something that’s global. It’s crazy. Everything has changed, and because of the way this culture moves, things get labeled “old” or “old school” so quickly. The impact that 50 Cent had and continues to have, I don’t think the mixtape would have been the same without him. It got taken away from retail and it’s moved to a digital domain, but the concept is the same. But without trailblazing people like 50—who is obviously at the top—and the deejays, you don’t have that change in how you market and promote yourself to a new level. It’s crazy because it was still slightly a pre-digital kind of age.

Sha Money XL: I think Drake was the last one that did it the illest. It’s a blueprint. It’s there, but that talent has got to come. You can take somebody’s hit, and we’ll really like the beat. But it doesn’t mean we’re going to like what you’re saying, your melody, or your voice. So it really comes down to a blueprint that’s there, but it really takes the talent to use it. They have to make it their way. You’ve seen them do it. J. Cole did it, Wiz Khalifa, Kendrick Lamar too. There’s still talent out there.
Before G-Unit, we let out a few mixtapes. It was more than one. But for right now, I think artists need to come with at least one legendary mixtape upon arrival, and their career should start from there. That mixtape should be treated as an album and given for free so that the people can really decide—gladiator style.

DX: What are some things about that year leading up to the album that most people don’t know or understand?

Rob “Reef” Tewlow: The waters weren’t all that calm just yet. So I brought my MPC with me, and Sha told me, “We’re gonna have a car pick you up and take you to the studio.” I asked him which studio, and he said, “I can’t tell you. But it’s in Long Island, and you’re gonna get taken there and taken back.” So I got in the car, and I think it was somewhere in Hempstead…about an hour outside of the city. Obviously Fif and Sha was there, and [Lloyd] Banks was there. Tony Yayo showed up about an hour later, and you could tell that [50] saw big things about to happen. This was before the ink was even dry with Interscope, Shady and everything. They felt so strongly about the record, that they wanted to hold on to it and not put it on a mixtape or anything.

Sha Money XL: I think the management part was the most difficult, because I’m a creative person. It took away from me being a studio rat, and I had to stop getting high [laughs]. I had to start getting on the phone taking all these long ass calls, which fucks up your creativity. So once we got to that point, Chris Lighty was really good with organizational skills. He had a strong team, and he added a lot of value to us by being that component. And I was cool with that. I managed 50 from 2002 until 2005, and when Chris came along it was a co-management thing. We worked together doing some of the most illest deals. Chris did the Vitamin Water and the [G-Unit Clothing] Ecko deal. I did the Reebok deal with Steve Stoute; so we did real good.

In addition to managing 50 Cent, Sha Money XL served as a producer and A&R for several G-Unit projects. He is now the Senior Vice President of A&R at Def Jam. Follow him on Twitter @SHAMONEYXL

Outside of his production and A&R work, Reef is now Music Director and Senior Producer of Specialty Programming at SHADE 45/Sirius XM Satellite Radio. Follow him on Twitter @NYCREEF