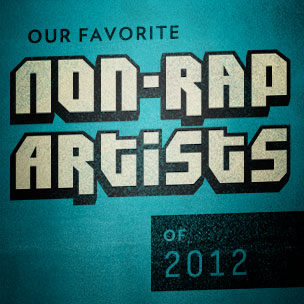 Our Favorite Non-Rap Artists Of 2012

It’s more than just Hip Hop around these parts. With the genre itself including so many influences within its evolving sound, venturing beyond Rap borders is both necessary and enlightening. The HipHopDX staff had some favorites in 2012 that moved past Hip Hop, and we felt like we should share them with our readers. Some you may have heard of, some Hip Hop artists actually worked with/sampled, but if they’re new to you then they’re worth checking out.

There are two must-have digital releases from 2012: Ab-Soul’s #controlsystem and BJ The Chicago Kid’s Pineapple Now-Laters. They’re not that different in theory either, as both artists – who roll in the same circles, bring a free-form creativity and respect for their predecessor to genres that often feel stagnated with redundant over-saturation. Motown Records’ hopeful BJ cut his teeth working with the likes of Kendrick Lamar, TiRon and Freddie Gibbs, but on his own debut project, he presents himself as a soulful visionary that can channel the classics and defy convention at the same damn time. “Dream II” provides an inspirational textbook to the distraught, while “Sex Is The Best Breakfast” encourages lovers to reconsider Cheerios. BJ bridges the gap in the new movements in Hip Hop and R&B, and I think he has a lot more depth and resonance than some of his melancholic peers. – Jake Paine, Editor-In-Chief (@Citizen__Paine)

Ellie Goulding is a unique case in music, where the “better late than never” mantra applies. Ellie’s debut album Lights arrived in 2010, but didn’t gain its sea legs until the following year (and this year as well) when the title track shot up the Billboard charts. Ellie returned with her follow-up album Halcyon, and the music spoke for itself. After covering The Weeknd’s “High For This” and Active Child’s “Hanging On” Ellie paved the way for her stellar original tracks like “My Blood,” “Don’t Say a Word,” and of course “Anything Could Happen,” which is the flagship track for the Beats By Dre promo campaign. Ellie’s boldness in lyric and sound is something that will be celebrated for years to come, and while even Hip Hop is slowly inviting her into the fold (she was rumored early on to be appearing on G.O.O.D. Music’s Cruel Summer), there really is nowhere to go but up for an artist like Ellie Goulding. As for the UK siren’s plans for 2013? Well, anything could happen. – Kathy Iandoli, Music Editor (@Kath3000)

Flying Lotus has always been around mainstream Hip Hop’s fringes, never appearing too interested in joining the party. He’ll randomly direct an Erykah Badu video (thankfully not the Flaming Lips one with her doppelganger butt naked in a tub of blood), or assist on something with the likes of Thundercat. He has his lane, and unless you’re specifically checking for him, you may miss him altogether. That’s unfortunate, because it’s rare to see someone blend Thom Yorke vocals, 8-bit Nintendo sounds and creative instrumentation together so seamlessly. Figuring out how to classify his Until The Quiet Comes album is harder than deciphering what Ghostface was saying on half of “Nutmeg.” There are times when the album sounds like one, long, hallucinogenic drug trip—which obviously appeals to those who gravitate toward eclectic excellence such as Sa-Ra Creative Partners. But even if you’re more straight-laced, give it a try, because you’ll probably be surprised at how much you enjoy it. – Omar Burgess, Editor-At-Large (@OmarBurgess)

Michael Kiwanuka was swept into mainstream consciousness earlier this year after bubbling under in his native England. After releasing his breakout Tell Me a Tale EP in April 2011, the 24-year-old soul stirrer nabbed a coveted supporting slot on Adele’s tour, but hit the mark when BBC named him its Sound of 2012 winner. This past July, Kiwanuka dropped his full-length debut Home Again, an album that transcended his pot of cool points and backed the hype. With shades of blues and acoustic beach rock, the LP is rich in musical sensibility – songs like the muscle relaxant “I’m Getting Ready” and “Bones” would fit comfortably on a decades-old jukebox. While co-signs from Jay-Z and John Mayer are gratifying, Kiwanuka upped the retro game by boldly proving that he’s got soul – and an old one at that. – Steven Horowitz, News Editor (@SPeriod)

2012 was all about Brainfeeder. With releases from Lapalux, Gonjasufi and label boss Flying Lotus, the Brainfeeder crew continued to make the albums they share shelf-space with sound sterile, thin and safe. But perhaps the strongest release of the bunch was Breakthrough from The Gaslamp Killer, the roster’s most carefree and conventional (a relative statement when the label is Brainfeeder) artist. Breakthrough is a deceiving title since there has been a growing fanbase following The Gaslamp Killer’s releases since 2007 but for those new to his chopped drums and samples from the crate blended seamlessly with original instrumentation made up of deep synth pads, digital blips and ethnic instruments, Breakthrough is the perfect starting point. In the same way that DJ Shadow’s Endtroducing and RJD2’s Deadringer felt cohesive and cinematic despite being made up of sounds loaded into an MPC, Breakthrough possesses the same range, switching from found voice mails used as skits to sinister intergalactic funk. – Michael Sheehan, Production Assistant/Contributor

RELATED: The Most Important Freestyles Of 2012