The Most Important Freestyles Of 2012 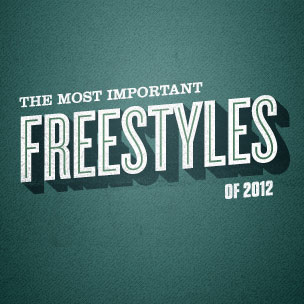 In 2012, emcees understood the power of the freestyle. As a result, freestyle tracks and remixes dropped left and right. Some were dope. Some were not. But we still gave an ear to all of the frees dropped this year and selected some of the hottest joints for the end of the year list, covering ground all over the Hip Hop map. We followed the music from New York’s Joell Ortiz to Texas’ Chamillionaire. We then went from Atlanta’s T.I. to California’s Black Hippy. While there, we stopped by to hear from Game and Bone Thugs-N-Harmony to round out the list.

What we noticed was that regional differences didn’t matter much here. What’s dope is dope, in any part of the map. Few can try to debate that. Now some may debate about what constitutes a real freestyle. But here, we took songs that were released as freestyles or remixes, whether official or unofficial, to compile this list. We found some gems, each standing out for different reasons. With so many dropping freestyles weekly, this was certainly no easy task. But listen to Joell Ortiz’s hunger on “Fuckin’ Problem” and understand he’s got a point to make. Catch Black Hippy on “Swimming Pools,” with every emcee showing why they deserve respect on their own. Peep T.I. over “Clique,” showing he can still bring flows out with the best of them. Hear Chamillionaire’s urge to serge back to the charts and catch Game and Bone celebrating with some West Coast nostalgia in 2012.

Did you really think he was going to sing? Instead of getting on his R&B groove, Joell Ortiz took us to the Brooklyn cypher with this one. After releasing the bar-heavy Shady debut with Slaughterhouse, Joell proved he could rock it solo too. Jackin’ the instrumental from A$AP Rocky’s single, “Fuckin’ Problem” became Ortiz’s canvas, without a looped up 2 Chainz hook, and Joell didn’t disappoint. Listening to this freestyle, Ortiz’s hunger is palpable. He delivers clever lines with aggression, establishing his place in the game. “My dope stand was Wonder Woman,” he rhymes. “Yeah, my heroin/heroine flew. But there’s more to appreciate from this effort and that may be that the best is yet to come. “I swear I’m having fun. I’m sparrin’,” he explains. “That’s not the scary part. The scary part is I ain’t done evolvin’.” We’re looking forward to hearing more of this evolution in 2013.

Kendrick Lamar may have been one of the most talked about emcees this year. His album certainly gained notoriety and critical acclaim. His single, “Swimming Pools” was one of the biggest hits of the year also but this track makes this list without a verse from K. Dot. Instead, the rest of Black Hippy take over for a posse cut worth remembering. Jay Rock, Ab-Soul and ScHoolboy Q hop on this cut for what became a Target bonus track from good kid, m.A.A.d. city. The freestyle, much like the original, takes an intriguing approach to the topic of alcohol. “Spread your wings. You probably won’t get far,” Ab-Soul says on his scene stealing verse. “I honestly wouldn’t advise operating a car.” Interestingly, he also offers advice found on good kid. “Try not to let the peer pressure get the best of ya,” he says, showing that depth, sincerity and skill shines throughout Top Dawg Entertainment.

It takes a lot of confidence to jump on “Clique,” one of 2012’s hottest singles. And we know T.I.’s got plenty of that self-assurance, so it was only right for him to jack the track for a verse. Tip rhymed on the instrumental with a point to prove and perhaps that’s exactly how he felt, delivering one of the year’s best. It’s not like T.I. hasn’t been successful. He’s just had many hurdles along the way. But near the end of the year, he seemed much more focused on regaining his spot at the Hip Hop table discussion. So it’s fitting that he’d sit next to the likes of Jay-Z and Kanye West here, even if he isn’t exactly from their clique. Still, T.I. unleashed a potent verse over the “Clique” instrumental, dropping intricate flows with ease, sounding effortlessly smooth while proving he’s still got the passion for the craft.

Chamillionaire – “Hands On The Wheel”

Lissie’s cover of Kid Cudi’s “Pursuit of Happiness” inspired ScHoolboy Q’s “Hands on the Wheel” with A$AP Rocky. But the sped up sample also moved others to try their hand at the beat. One of those that stood out was Chamillionaire, who decided to use it for a freestyle to thank fans who preordered Ammunition. With this, Cham proved he could still do what fans had grown accustomed to, delivering that quick-paced flow he became famous for. “Don’t fall back, no time to rest,” he says to start the track, showing that his mind is set on regaining his chart topping success of the past. “We sold it once so we can sell it twice ‘cause these Texas boys is way more than hype,” he rhymes to finish the cut. Ammunition ended up being an extension of this, rated a 4/5 by HipHopDX’s Editor-In-Chief, Jake Paine and an even higher 4.6/5 by readers.

When Game released the original “Celebration,” he had Lil Wayne, Tyga, Wiz Khalifa and Chris Brown on it but it still sounded like a Bone Thugs-N-Harmony song. Of course, that was in large part due to it being a remake of Bone’s “1st of tha Month.” But everyone on the track also tried to pull a Notorious B.I.G. move to pay homage to BT&H by mimicking their rapid yet melodic delivery. Perhaps Game figured he would do one better, adding Bone to “Celebration” afterwards. The result was one that reenergized Bone Thugs-N-Harmony. There’s no doubt that Bone influenced Game’s career. They’ve influenced many. Their legacy has been cemented in Hip Hop for decades now. But “Celebration” became a toast to the group’s triumphs through tribulations. On a year that saw the group reunite for Rock the Bells and for this track, it’s only right we celebrate this as a highlight of the year.